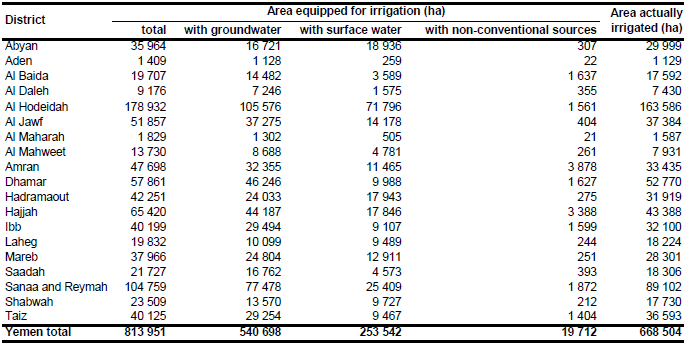 The irrigated areas were digitized using Landsat satellite imagery [YE03], MODIS Vegetation Indices [YE04] and several large-scale irrigation maps ([YE05]; [YE06]; [YE07]). The approximate position and extent of the major irrigation schemes was detected based on the large-scale maps, and their more precise extent was derived by digitizing vegetated areas from the satellite imagery. The polygons digitized that way were then combined with cropland extracted from the Globcover regional landcover classification for North Africa [YE08] and irrigated area was first assigned to pixels that were covered by both data layers (digitized polygons AND cropland in Globcover) and after, if required, to pixels covered by just one of the two layers (digitized polygons OR cropland in Globcover). In the provinces of Al-Jawf and Mareb irrigated land was in addition assigned to pixels classified in Globcover as “Sparse vegetation (<15 percent)”.