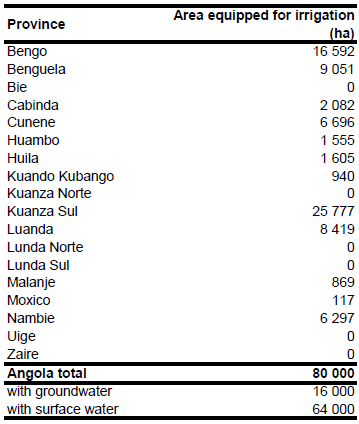 The information on water sources for irrigation is also very week. In year 1974 all irrigation was from surface water [AO01]. However, according to the SWECO Grøner assessment use of groundwater for irrigation is important in the coastal area and in the southwestern provinces, especially in the basins of Dande, Bengo, Cuanza, Longa, Queve, Cunene and Cubango were water is taken from the alluvium after rivers have dried up [AO02]. Based on this qualitative information area equipped for irrigation with groundwater was estimated at 20 percent.