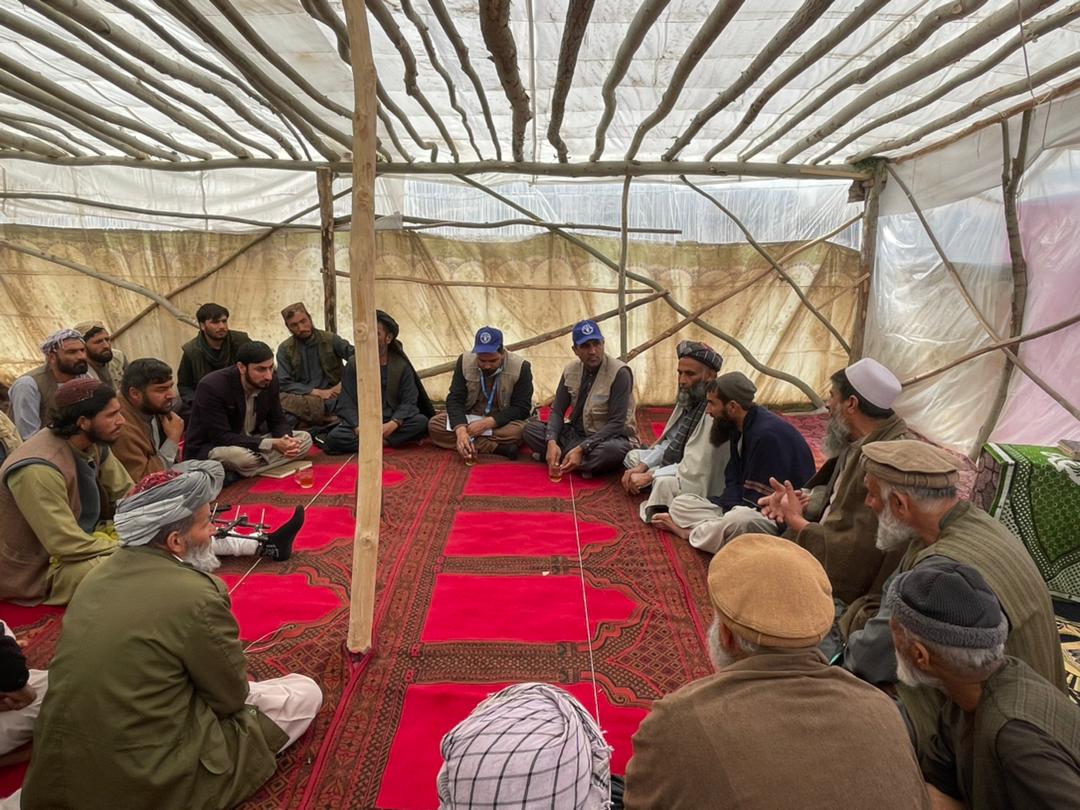 Faridullah Sherzad, FAO National Soybean Trial and Seed Associate in Mazar-e-Sharif regional office, shares his experiences from a recent mission to Khan Abad district in Kunduz province. His story is a mix of disappointment, contentment and hope.

In March this year, I took an extraordinary road trip to Khan Abad district in the eastern part of Kunduz province, north of Afghanistan. Together with other colleagues from FAO regional office in Mazar-e-Sharif, we went on a mission to talk to the farmers in the field about the impact of FAO wheat cultivation assistance on their livelihoods. This mission wouldn’t have been possible a year ago due to security challenges and access constraints. Access to remote and hard-to-reach areas has improved significantly since August last year.

Agriculture and farming are the main sources of income for most residents in the district. But constant conflict in the district has caused major displacements, forcing many farmers to abandon their land several times during the past few years.

I met with a group of farmers in Janat Bagh village of Khan Abad district, located about 25 km east of the provincial center, who received certified wheat seed, fertilizers and technical training from FAO. Home to over 400 families, the village has been at the forefront of conflict for many years, brutally affecting living conditions of people in the village.

Residents of Janat Bagh village rely completely on agriculture and livestock farming as their only sources of income with other employment prospects being scarce following the economic downfall across the country. In addition, the lack of a proper irrigation system has resulted in reduced yield.

Mohammad Nasir, a 36-year-old farmer from Janat Bagh village, recently returned to his village after he moved to the provincial center several years ago due to war. He told me if he didn’t receive the timely wheat assistance from FAO, he wouldn’t have been able to grow good crops despite some rain and availability of irrigation water. “FAO’s support has been lifesaving to us,” he said.

Like every farmer supported by FAO in Afghanistan, Mohammad Nasir received 50 kg of certified wheat seed, 50 kg of fertilizers and specific technical training. The certified seed and fertilizers will increase the wheat crops by over 50 percent per jerib (around 0.2 ha).

At the time of my visit to the district, the wheat crop reached the jointing stage and the results on the field were looking good. The farmers told me they were optimistic about the certified seed variety and hoped for a plentiful harvest. Without the assistance, farmers said, they would have no other option but to cultivate the low-quality local seed and wouldn’t have been able to purchase fertilizers.

I was disappointed at first to see the suffering of the people in this remote district who were not able to properly feed their families, cultivate their land, and raise their livestock. But I was glad to know that FAO’s assistance enabled the vulnerable families to cultivate their land, which will help farmers produce enough wheat for at least a year.

The increasingly worsening situation across the country can’t be managed by humanitarian aid alone. Ongoing drought, COVID-19 and economic constraints such as unemployment, cash crises and soaring prices have pushed millions of Afghan men, women, and children into acute food insecurity.

I believe the international organizations and donors should immediately step up and resume funding to development projects, particularly in the agriculture sector, to make sure the country’s economy is revived and the humanitarian assistance is sustained. In other words, proper wheat seed distribution may not be possible without continued support to production of high-quality certified seed in the country.

While FAO’s wheat cultivation assistance is helping farmers in Khan Abad district of Kunduz to produce sufficient wheat for a year, sustainability of rural livelihoods requires comprehensive and continued support to agriculture from national and international organizations beyond emergency aid.