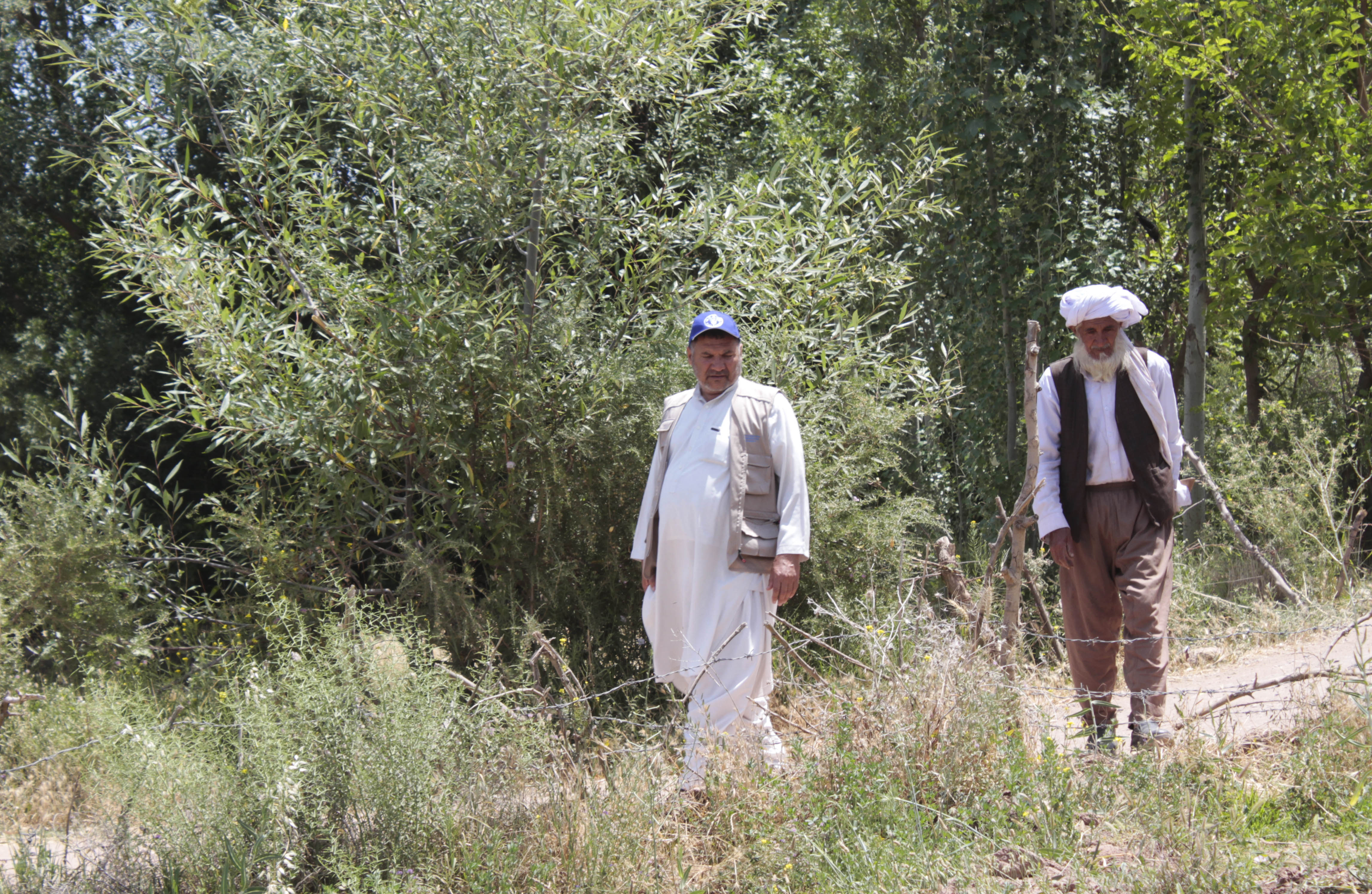 Noor Ahmad Burhani, FAO National Dairy Industry Development Specialist in Herat, shares his experiences from a recent mission to the capital of Ghor province, where a small pocket of “catastrophic” levels of food insecurity has been detected for the first time in the country. The story illustrates the harsh realities of a worsening humanitarian situation in the area and the positive impact of FAO interventions on rural livelihoods.

On 23 May 2022, I went on a joint mission with colleagues from the European Civil Protection and Humanitarian Aid Operations (ECHO) and the World Food Programme (WFP) to Ghor province in western Afghanistan. The aim of our mission was to visit FAO interventions in the field and talk to farmers and herders on the ground, as well as assess the humanitarian situation in the mountainous and drought-prone province.

FAO had earlier supported a total of 22 820 people with emergency packages, including wheat assistance, livestock protection, cash transfers and home gardening packages in Ghor province in 2021.

We travelled from Herat to Firozkoh, the administrative center of Ghor province, by road to meet families supported by FAO in two villages of Oshturkhan and Ahangaran. The distance between Herat and Ghor is around 370 km and it would normally take about five hours to drive that distance but we drove 23 hours to get to Firozkoh. The road is mostly damaged with frequent wheel-ruts and broken culverts along the way. The poor condition of the road makes it even more difficult to drive on the hilly and mountainous highway. However, security of the highway has improved significantly. It wouldn’t have been possible to drive on this road without major security threats a year ago.

Located in the western Hindu Kush Mountain range, Ghor province heavily depends on Herat and Kabul, as two major commercial hubs, for most of supplies. But the main passages connecting Ghor with the two provinces are closed during the winter because of heavy snowfall. The recurrent blockages and poor road conditions result in high transportation costs for all commodities, especially food items. Thus, the price of food in Ghor is usually higher compared to other parts of the country.

The lack of employment prospects caused mainly by the halt of development projects, higher food prices and reduced purchasing power of families, have adversely impacted people’s livelihoods in the province. Many households moved to Herat province or even outside the country in search of work, some accepting the risks of illegal migration.

Agricultural and animal husbandry are the primary occupations of inhabitants in the province. But due to soaring prices of agricultural inputs, lack of economic opportunities, COVID-19 and the ongoing drought, many farmers and herders were not able to purchase certified wheat seed or animal feed last year. Some herders, we were told, were forced to sell their livestock because they couldn’t afford to feed the animals. “There was a shortage of animal feed in the market and the prices went so high,” one herder said during our visit.

Ghor is the only province in Afghanistan where a small pocket of “catastrophic” levels of food insecurity - or IPC Phase 5 - has been detected in the country. More than 20 000 people in the north-western province of Ghor are facing catastrophic levels of hunger because of a long harsh winter and disastrous agricultural conditions. This is the first time since the introduction of the IPC in Afghanistan in 2011 that IPC Phase 5 food insecurity has been identified in the country.

If emergency assistance doesn’t reach all districts of Ghor on time, more people are expected to face the same levels of food insecurity across the province. The worrying situation must compel us all to act now and big!

Villagers told us if they hadn’t received timely and critical assistance from FAO, they wouldn’t have been able to cultivate their land or keep their animals. As a result of the provision of certified wheat seed, the farmers are expecting very good crops as wheat reached harvest stage in most provinces in the western region of Afghanistan. “The yield will be twice and even three times more than the local wheat seed,” said a farmer from Ghor.

The animal feed and the specific technical training helped the herders assisted by FAO to keep their animals healthy and productive. After the assistance, animals put on weight and their milk production increased noticeably.

I hope humanitarian organizations in Afghanistan pay more attention to the vulnerable people in Ghor province, especially during these tough times. People are in dire need of relief and resilience building support. In addition, the region requires concentrated development efforts, such as construction of medium and small size irrigation dams, establishment of orchards and, most importantly, construction of the main road connecting Ghor to Herat and Kabul.

As a humanitarian professional, I owe it to the people of Ghor to try even harder to impact the living conditions of as many families as possible in the province through my increased dedication and hard work.