Why the tropical Andes? 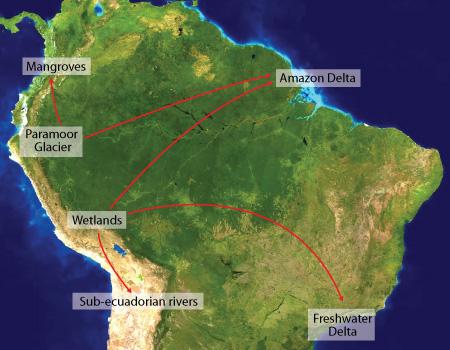 The tropical Andes mountain range spans from northern Colombia to southern Peru, and is of strategic importance for the environmental stability of South America.

Water is the linking thread which connects the tropical Andes to most watersheds in South America, not only those flowing west to the Pacific Ocean, providing water for cities such as Lima, Quito and Guayaquil, but also east to the Atlantic Ocean, by way of the Amazon river basin and the La Plata River basin. As such, the hydrological stability of most of the continent depends on services provided by micro-ecosystems found around and above 4000 masl (páramos, wetlands and glaciers). Significant threats already abound (e.g. droughts, floods, growing pressures to water quality, continuing loss of wetlands, and the impact of these losses on the natural functions of floodplains and estuaries.

A strategy for climate change adaptation/ disaster risk management / natural resource management in the case of South America must be addressed with a regional approach that goes beyond national borders to become a strategy for the management of natural resources in the sub-continent of South America as a territorial unit. This territorial unity of the region is determined by the hydrological dynamics which, according to the law of gravity, has its origin in micro-ecosystems located above 4000 masl, to its mouth in the Pacific and Atlantic oceans. 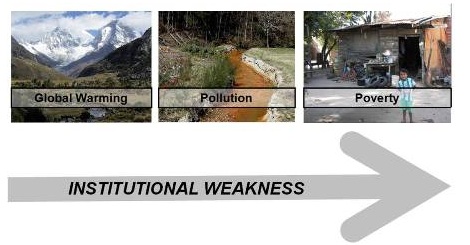 The challenges in the Andean region are manifold, however, institutional weakness is transversal and, therefore, the main challenge. A solid institutional framework will address the other challenges, both present and future, such as global warming (through effective adaptation); pollution (with the implementation of environmental management policies, and in particular for mining) and social problems, including migration, poverty and consequent food insecurity.