The methodology included implementation of pilot sites to carry baseline assessments and field tests. The selection of pilot sites is based on "expert sampling" process, targeting the most vulnerable areas of the country to climate change.

The first selection criteria focused on the most vulnerable zones to climate-related risks and food insecurity. The southern lowlands and mountain areas were given priority based on the findings of the climate change impact and vulnerability assessments through NAPA.

The second stage in the selection involved identifying representative districts within the two livelihood zones (lowland and mountain). The further consultation with the key line Ministries and the Lesotho Meteorological Services has confirmed that Mafeteng and Mohale's Hoek would be representative of the densely populated and drought prone southern lowlands, while Thaba-Tseka would represent the main ecological and livelihood zone of the mountain areas. The southern lowlands of Lesotho constitute approximately 8.4 percent of the total area of Lesotho and approximately 24 percent of the population. The district of Thaba-Tseka, on the other hand, represents 23.8 percent of the mountain area of Lesotho and 80 percent of the district is mountain.

The third stage involved identifying the representative catchments within the selected districts. This was done in consultation with major implementing departments at the district level and guided by national and local experts. The issue of representativeness from a national perspective was also discussed with the stakeholders and those considerations were overlaid on the district choices of pilot catchments. On these grounds, three pilot sites were selected for implementation of the TCP. Given the high vulnerability of the southern lowlands 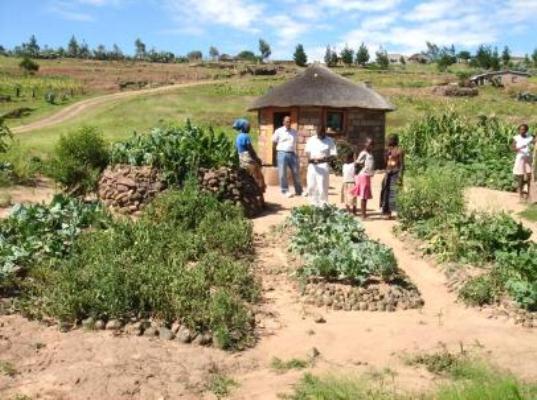 to climate change and climate variability, two sites were selected in this livelihood zone. The first pilot site is Mabalane, a subcatchment of the Kolo-la-Pere River, in the Mohale's Hoek district representing southwestern parts of the lowland. The second pilot site is Thaba-Tšoeu Ha Mafa, a subcatchment of the Tsoaing River in Mafateng district, representing a transition zone between the lowlands and the foothills of southern Lesotho. This zone is expected to feature greater vulnerability to climatic change. The third pilot site is Rantsimane, a subcatchment of the Senqu River, in the mountains areas of Thaba-Tseka. Taken together, these three catchments represent three major transects of vulnerability to climate change ranging from the southwestern lowlands to the mountain zones of Lesotho with a gradual transitional site extending from the southern lowlands to the foothills.

Household level participatory approaches were used to conduct a baseline study and identify the current risks, vulnerabilities and coping strategies. The baseline survey also helped in making a preliminary comparison of farmers/HHs/farmers group with a particular adaptation option that is identified and field tested and those in the nearby or same catchments without the practices. Such a comparison was done on a case-by-case basis for a specific practice in those catchments (not geographical area). The idea is that this TCP contributes to identifying an example of workable adaptation practices for which there is a clear gap under the proposed future adaptation practices in the NAPA. Furthermore, baseline surveys and participatory methods were also employed to assess the vulnerable livelihood groups, food insecurity, and natural resources degradation vulnerability to climate risk in each pilot watershed.