84% of the world's forests are publicly owned, but private ownership is on the rise

Trends towards community empowerment, decentralized decision-making and increased involvement of the private sector in forest management seen over the past 20 years are reflected in changes in forest ownership and tenure in some regions. However, most of the world's forests remain under public ownership. Differences among regions are considerable. North and Central America, Europe (other than the Russian Federation), South America and Oceania have a higher proportion of private ownership than other regions.

Forests are managed for a multitude of uses and values.

For FRA 2005, countries reported on the area of forest where conservation was designated as the primary function. This area has increased by an estimated 96 million hectares since 1990 and now accounts for 11 percent of the total forest area. These forests are mainly, but not exclusively, located inside protected areas. Conservation of biological diversity was reported as one of the management objectives for more than 25 percent of the total forest area.

Wood production continues to be an important function of many forests, and reported removals of non-wood forest products are on the rise. Production of wood and non-wood forest products is the primary function for 34 percent of the world¿s forests. More than half of all forests are used for production of wood and non-wood forest products in combination with other functions such as soil and water protection, biodiversity conservation and recreation.
Global wood removals were forecast to amount to 3.1 billion cubic metres in 2005, similar to the total removals recorded for 1990 and averaging 0.69 percent of the total growing stock. While Asia reported a decrease in wood removals in recent years, Africa reported a steady increase. It is estimated that nearly half of the removed wood was woodfuels. Informally or illegally removed wood, especially woodfuel, is not usually recorded, so the actual amount of wood removals is undoubtedly higher. 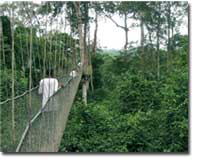 Use of forests for recreation and education is increasing, but difficult to quantify

The only region with fairly good data on the use of forests for recreation, tourism, education and/or conservation of cultural and spiritual sites is Europe, where provision of such social services was reported as the primary management objective for 2.4 percent of the total forest area. In all, 72 percent of the forest area of Europe (not including the Russian Federation) provides social services.