The value of wood removals is decreasing, while the value of NWFPs is increasing - and underestimated

Roundwood removals in 2005 were forecast to value around US$64 billion, mainly accounted for by industrial roundwood. The reported trend shows an increase of about 11 percent over the previous 15 years, which is less than the rate of inflation over this period. Thus, the reported value of removals in real terms has fallen at the global level.

The forecasted value of NWFP removals amounted to about US$4.7 billion in 2005. However, information was missing from many countries, and the reported statistics probably cover only a small fraction of the true total value of NWFP removals. Edible plant products and bushmeat are the most significant products in terms of value. The trends at the global and regional levels generally show a slight increase since 1990. 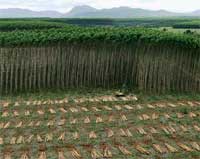 Around 10 million people are employed in forest management and conservation

Reported employment in forestry (excluding the wood processing industry) declined by about 10 percent from 1990 to 2000. Most of the decline has occurred in the primary production of goods, and this can probably be attributed to increases in labour productivity. At the regional level, Asia and Europe showed a downward trend, while in the other regions employment increased somewhat - probably because roundwood production was increasing faster than increases in labour productivity. In Europe, the decline in employment can also be attributed to the restructuring of formerly centrally planned economies.

FRA 2005 only collected data on formal employment. However, some country reports did not separate informal and formal employment, so formal employment could be somewhat less than 10 million people. Taking into account the informal sector, the overall importance of forest employment for rural livelihoods and national economies is clearly higher than this number suggests.