Activities of the forest sector can contribute to the introduction and spread of invasive species through forest utilization practices and the intentional introduction of species for commercial forestry, agroforestry and other purposes.

Forest utilization, in particular practices such as timber harvesting, extraction of non-timber products, the construction of logging and transport roads and facilities for logging camps, and the conversion of natural forest to plantations, can have direct and indirect negative impacts on the ecological functions of forests and on forest biodiversity by promoting the invasion of alien species. 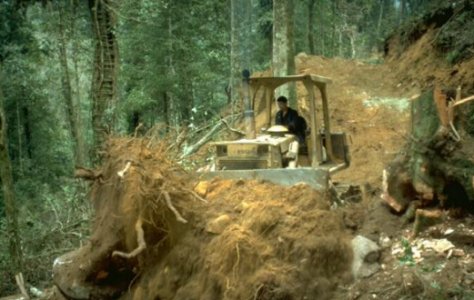 Construction of a forest road in Bhutan (FAO/FO-0822/N. Winkler)

Forest roads provide essential access for timber extraction, management and monitoring of forest resources and as such are an important requirement for sustainable forest management and use. However when poorly designed and maintained, forest roads are often the cause of a variety of environmental problems associated with forest harvesting operations. Under some circumstances, forest roads may also initiate or accelerate the invasion of exotic species that ultimately displace native species. In addition, the increased levels of human activities in previously inaccessible areas, as facilitated by forest roads, cause many environmental problems including the possible introduction of alien species.

Forest sector activities can promote the emergence or re-emergence of infectious diseases which degrade human health and that of other species. Clear-cutting and road building may increase exposure of workers to infectious diseases such as human immunodeficiency virus (HIV), Ebola hemorrhagic fever, and Marburg hemorrhagic fever, yellow fever, leishmaniasis, malaria and Ross River virus disease. Logging can change the abundance, extent and quality of aquatic larval habitats for the Anopheles mosquito vectors of malaria and by disturbing the forest floor, creating depressions that catch and hold water, thus creating new sites for the development of more mosquitoes.

Deforestation can result in humans coming into closer contact with the vectors for such diseases as leishmaniasis, yellow fever, trypanosomiasis (both African sleeping sickness and Chagas disease), and Kyasanur forest disease. Similarly, some animal reservoir hosts increase in abundance near the edges between forests and human settlements thus increasing the risk of human exposure to pathogens. The destruction of forest habitat may result in the removal, replacement or eradication of dominant vector species and sometimes, the replacement species are more effective vectors of disease as observed with loa loa (tropical eyeworm) and onchocerciasis (river blindness). Deforestation and desertification may also be accompanied by changes in the distribution of vectors such as ticks, blackflies, tsetse flies and Anopheles mosquitoes. 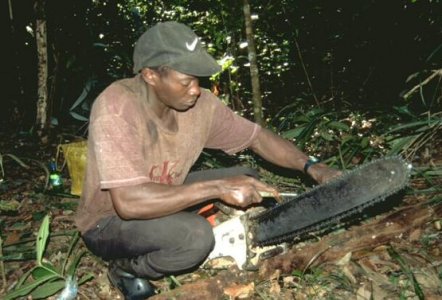 Forest workers, such as this worker in the tropical forests of Suriname, can experience increased exposure to infectious diseases and their vectors (FAO/FO-0760/M. Noebauer)

Refforestation activities can also affect the population dynamics of vectors and reservoirs which can promote the emergence of infectious diseases.

The forest sector itself is a major source of invasive species. Many of the tree species used in commercial forestry in many parts of the world are alien or non-indigenous to the area. Hundreds of species have also been widely and successfully planted for a variety of purposes including afforestation, desertification and erosion control, and for the supply of fuelwood and other forest products. Such intentional introductions however, can bring about many unintended and costly consequences when these species escape cultivation and invade natural ecosystems. Alien tree plantations can have negative effects on the biodiversity and water resources of afforested areas. Alien species that spread from plantations to natural and semi-natural areas, and also into areas set aside for conservation and water production, have considerable impacts on ecosystem properties and functions.