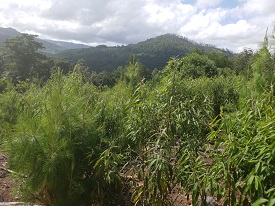 Vernonanthura polyanthes (Asteraceae) is causing severe negative impacts on the plantation forest sector in the Eastern Highlands of Zimbabwe. The plant is native to Brazil and was imported into Mozambique as a bee fodder to boost honey production. The 2000 cyclone Eline is believed to be responsible for spreading the V. polyanthes into Zimbabwe with wind dispersal acting as the main agent to further increase its distribution in the Eastern highlands.

V. polyanthes locally named mupesepese (everywhere) in the eastern highlands, is a shrub or small tree up to 5m height and sometimes taller especially in low lying fertile areas although it does not completely disappear in fertile soils. It favors high rainfall, species poor areas, with high soil temperature, nitrogen and phosphorus content and low soil pH and carbon. It forms extensive tall stands that inhibit forest regeneration.

V. polyanthes invades cleared forest areas after fire, therefore affecting the plantation forest industry as it has about 40000 ha of unplanted land due to several challenges including fires, illegal settlements, and mining. This has implications on establishment and early growth of plantation species, resulting in increased land preparation and weeding costs. It is this kind of information which derives the need to find a lasting solution in the control and management of V. polyanthes.

©Tatenda GotoreThe Zimbabwe Forestry Commission through its Research and Training Division is undertaking studies into the control and management of V.polyanthes, with support and guidance from the individual companies in the industry. While different companies have made efforts to establish solutions in their estates, it has been noted that a lasting solution to the weed will depend upon cooperation by the players to get meaningful results which can be useful to all. 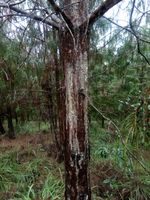 In the visit in December 2019 to a private woodlot at Kifanya in Njombe Region and Green Resources Ltd Mafinga in Iringa Region, all located in Southern Highlands of Tanzania, isolated death of trees in the woodlot (aged 5 – 6 years) were observed, with incidence estimated at 60-70%. The trees died from the top of the crown downwards, i.e. die back, and the branches had cankers; some girdling the branch and causing its death. Infection on the main stem was characterized by copious exudation of resin, often originating from a branch whorl. Cankers on the branches also had traces of resin exuding from them. 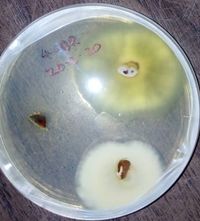 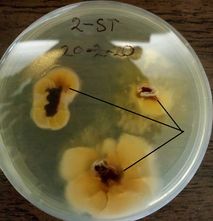 The canker samples from affected branches and trunks were taken from symptomatic trees using standard protocols. The samples were processed in the laboratory using cultivation-dependent assay technique using PDA supplemented with Neomycin. Preliminary results three days after culturing showed that a substantial share of the cultures produced cottony (wooly) mycelia, one of the characteristic features of F. circinatum in culture. One week after sub-culturing traces of salmon pigmentation was observed on the underside of the plates; another characteristic of this species.
Since the disease is known to be seed borne, the following strategy is proposed: (i) Monitoring the movement of planting material including seed, so that clean planting material is available to growers and (ii) Training growers, forest extension officers and forest managers on epidemiology of the disease for timely detection and intervention.

A new pest of Senna siamea in Malawi 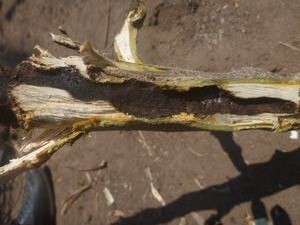 Smallholder tobacco growers in Malawi traditionally use barns for curing tobacco. However, the practice is associated with increased use of trees for construction and maintenance of the barns, and harvesting of juvenile trees for hanging sticks and hanging poles. As a result the traditional barns are proving to be unsustainable as they require regular maintenance thereby contributing to deforestation and forest degradation in the country. Research has shown that live barn technology if successfully implemented can positively reduce deforestation and forest degradation 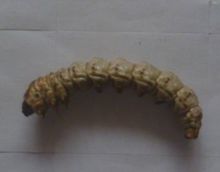 Surprisingly most tobacco companies in Malawi are promoting live barn technology using Senna siamea trees for live barns construction. Of late, the species is being attacked by stem borer at larva stage. The stem borer bores into the stem and as it grows it tunnels downwards hollowing out the main root. The larva ejects the frass through a hole in the stem just above the ground level and the frass accumulates at the base of the stem.
The attack of the borer results in tunnels in the tap-root and the stem immediately above ground. The tree stops growing and eventually dies. The tunnel may reach about 40-60 cm in length. Vigorously growing trees may survive the attack with some deformation on the stem. The larva is not yet identified and no adult beetle has been observed, but it appears to be the larvae of a long-horned beetle (Cerambycidae, Coleoptera). 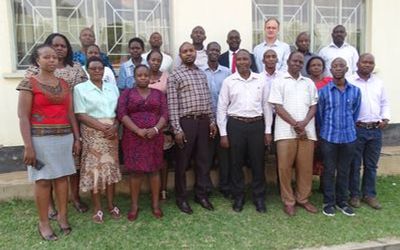 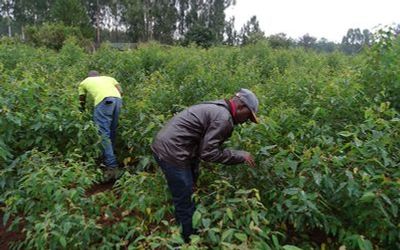 At Makerere University College of Agricultural and Environmental Sciences, Prof. Hurley held discussions with Prof. Samuel Kyamanywa and Prof. Denis Mpairwe. The meeting among others explored opportunities for recruitment of Dr. Nicholas Kagimu at the college after his post doc.
At NaFORRI the visiting team met with the Institute Administration led by the Director, Dr. Hillary Agaba, and various researchers and staff. Prof. Brett Hurley made a presentation to the staff on global tree health. Led by Mr. Peter Kiwuso, the team made some field visits and observed various tree health issues in Uganda. Of interest was the biological control efforts of the Eucalyptus pests. FABI had previously provided the two biological control agents (Cleruchiodesi nockae and Psyllaephagus bliteus) for control of bronze bug and red gum lerp psyllid, respectively. Other pests observed included yet to be identified caterpillars on clonal Eucalyptus and Basdavia tree species in Tororo district on the border with Kenya.

by By Mesfin Wondafrash (FABI, University of Pretoria) 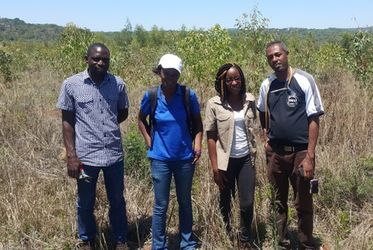 [South Africa, April 2020] Non-native Eucalyptus insect pests pose a threat to eucalypt production in sub-Saharan Africa. In 2017, a collaborative project was developed with the aim of understanding the distribution and genetic diversity of Eucalyptus insect pests and their natural enemies in the region. The project was led by Profs Brett Hurley and Bernard Slippers of the Forestry and Agricultural Biotechnology Institute (FABI) at the University of Pretoria and run by a postdoctoral fellow Dr Mesfin Gossa. The project involved foresters and entomologists from 14 sub-Saharan African countries, including Democratic Republic of Congo (DRC), Ghana, Ethiopia, Kenya, Madagascar, Malawi, Mauritius, Reunion, Rwanda, Sierra Leone, South Africa, Uganda, Zambia and Zimbabwe.

Surveys and sample collection were conducted and insect identification and genetic diversity analysis were made using a combination of morphological and molecular techniques.
The first publication of this project appeared recently in the journal Biological Invasions. This paper highlights that five major non-native Eucalyptus insect pests, namely Glycaspis brimblecombei, Gonipterus sp.n.2, Leptocybe invasa, Thaumastocoris peregrinus, and Ophelimus maskelli were identified from various countries across the region. Most of these insect pests were found broadly distributed across the sampled countries, with first reports in many of those countries. Moderate genetic diversity was observed for T. peregrinus and Gonipterus sp.n.2 and at least two distinct lineages for L. invasa. This is a remarkable result as it sheds light on the understanding of Eucalyptus insect pests in sub-Saharan Africa and forms baseline information for quarantine, management and future research of these pests in the region and beyond. Perhaps the most important output of this project is the contribution it made towards developing a collaboration among foresters and entomologists from various institutes across the region. Such networks play a crucial role in responding to the growing threat from invasive species.
You can find the paper via the below link, but if you are unable to obtain the paper please contact Mesfin Gossa Wondafrash ([email protected]) or Brett Hurley ([email protected]).
Wondafrash, M., Slippers, B., Nambazimana, A. et al. Distribution and genetic diversity of five invasive pests of Eucalyptus in sub-Saharan Africa. Biol Invasions (2020). https://doi.org/10.1007/s10530-020-02250-4
Authors on the paper included:
Mesfin Wondafrash, Bernard Slippers and Brett Hurley (University of Pretoria, South Africa)
Alphonsine Nambazimana (Rwanda Water and Forestry Authority)
Isaac Kayumba (University of Rwanda)
Samuel Nibouche (CIRAD, La Réunion)
Simon van der Lingen (Sustainable Afforestation Association, Zimbabwe)
Birhane Asfaw (Ethiopian Environment and Forest Research Institute)
Herbert Jenya (Forestry Research Institute of Malawi)
Eston Mutitu (Kenya Forestry Research Institute)
Idea Makowe (Forestry Commission of Zimbabwe)
Donald Chungu (Copperbelt University, Zambia)
Peter Kiwuso (National Forestry Resources Research Institute, Uganda)
Emmanuel Kulimushi (University of Goma, DRC)
Andrianantenaina Razafindrakotomamonjy (National Centre for Applied Research for Rural Development, Madagascar)
Paul Bosu (Forestry Research Institute of Ghana)
Preeaduth Sookar (Ministry of Agro-Industrial and Food Security, Republic of Mauritius)