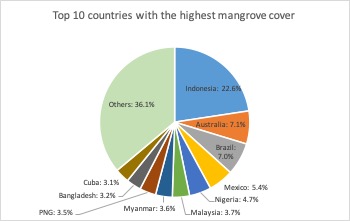 Mangroves are tropical species generally found on sheltered coastlines and estuaries. Although mangroves are widely distributed in 128 tropical and subtropical nations and territories, they are in fact rare at the global scale, covering less than 1 percent of all tropical forests worldwide.

According to global statistics on mangrove extent developed by the Global Mangrove Watch, the global extent of mangroves in 2016 was 135 882 km2. The most extensive mangrove area is found in Asia, followed by North and Central America and Africa. Five countries (Indonesia, Australia, Brazil, Mexico and Nigeria) together account for 42 percent of the total global area, and 64 percent of the total mangrove area is found in just ten countries (Giri et al., 2011). 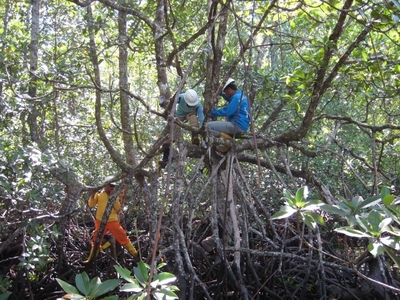 Survey of mangrove forest in Halmahera, Indonesia. ©FAO/Kenichi ShonoDespite the importance of ecosystem services provided by mangroves (e.g. timber and other non-wood forest products, carbon sequestration, biodiversity conservation, coastal disaster mitigation, etc.), mangroves continue to be lost and converted to other uses, including agriculture, aquaculture, urban development and infrastructure. An alarming 20 percent of mangrove area, or 3.6 million hectares, was lost between 1980 and 2005 (Giesen et al., 2006). More recent data from the Global Mangrove Watch shows that 6 057 km2 of mangroves have been lost between 1996 and 2016. Goldberg et al. (2020) estimated that 62% of global losses between 2000-2016 resulted from land-use change, primarily through conversion to aquaculture and agriculture. Up to 80% of these human-driven losses occurred in Southeast Asian. The rate of net loss has apparently slowed down in recent years, which may be a reflection of increased awareness of the value of mangrove ecosystems, but the annual rate of loss is still disturbingly high.