Mangroves provide many essential ecosystem services to human populations that live in and around them. In addition to the mangrove fruits themselves, many species of fish and invertebrates that either live within the mangrove forest or access it during flood tides are an important source of protein for humans and wildlife. Many species of mangrove trees are also harvested for their insect- and rot‑resistant wood which is used for building or handicrafts, while the nipa palms are an important source of roofing thatch. Wood is also used for firewood and charcoal production. 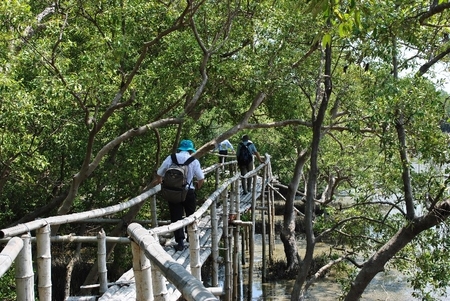 Mangroves also act as efficient water filters by trapping sediments and allowing nutrients or heavy metals to be taken up by plants or incorporated into sediments. This improves the quality of water and protects nearby habitats, such as coral reefs, from siltation, whilst also protecting coastlines from erosion, providing soil stabilization and storm protection.

Mangroves make major contributions to coastal protection from wind, waves and salt spray; this protective function was made evident, for example, by the catastrophic 2004 Indian Ocean tsunami, Typhoon Haiyan in the Pacific, and the storm surges associated with various Atlantic hurricanes. Mangroves effectively attenuate the energy of waves from tsunamis and storm surges, reducing damages to coastal infrastructure and saving lives.

In terms of economic value, mangroves provide huge benefits. The total economic values for mangrove habitats hence range from USD 2 772 ha-1 yr-1 up to as much as USD 80 334 ha-1 yr-1 (average USD 28 662 ha-1 yr-1). The forests are an essential resource for coastal human communities, providing fish, mollusks and crustaceans for trade and consumption and materials such as fuel, timber, honey, medicines and fodder. In a review of values for different types of ecosystem services, the economic values of forestry, fisheries and tourism ranked highly (UN WCMC, 2014; Salem and Mercer, 2012).