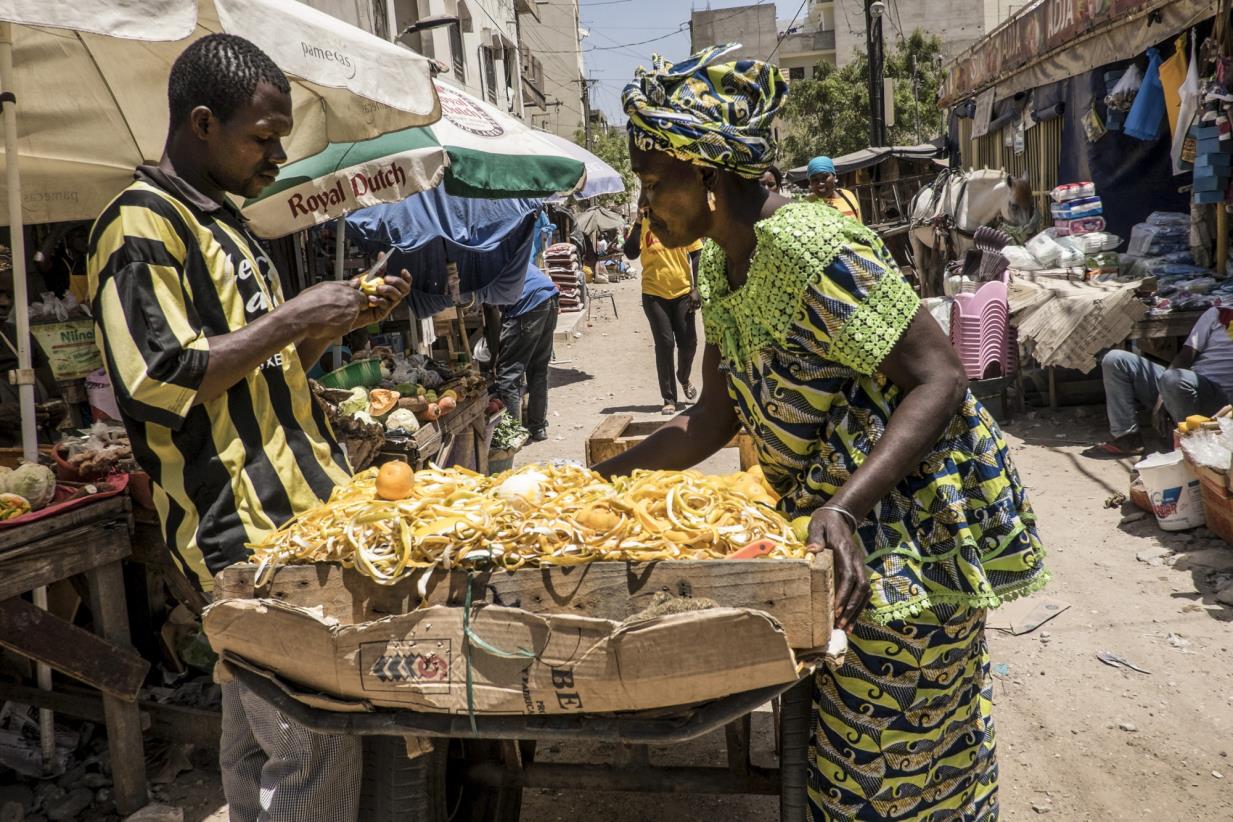 A women shops for food at a local market in Dakar, Senegal.

7 April 2016, Abidjan – Africa has made great strides in tackling hunger -- achieving a 30 percent drop in the proportion of its people facing hunger over the 1990-2015 period -- but climate change, conflict and social inequality continue to present major challenges in the continent's quest for a future free from hunger and want, FAO Director-General José Graziano da Silva said today.

While the overall proportion of Africans who are food insecure has dropped, there are "significant variations" in the numbers of food insecure can be seen from country to country, he noted.

"Africa's economic performance remains robust with growth rates above the global average. However, vulnerability to climate change is high, post-harvest losses are considerable, natural resources are being depleted, and not everyone is benefiting from the proceeds of the current strong economic growth. Access to remunerative income, social protection systems and decent employment opportunities remain narrow for too many rural households," FAO's Director-General said.

He was speaking at the official opening of the FAO' Regional Conference for Africa, taking place this week in Abidjan with the participation of the Prime Minister of Côte d'Ivoire, Daniel Kablan Duncan..

Graziano da Silva urged his listeners to continue to work together to harness the power of the food and agriculture sector as a catalyst for inclusive growth, poverty reduction and fighting hunger, saying: “In spite of the many hurdles along the way, today I urge you to look at how far we have come in the journey to end hunger in our lifetimes.”

The conference's theme ''Transforming African Agri-food systems for inclusive growth and shared prosperity” mirrors the vision of the African Union and its NEPAD Planning and Coordinating Agency to realise a renewed vision for Africa's agriculture sector.

“This conference adds momentum to the push for a fundamental shift in the orientation of Africa's agricultural and rural development towards transforming the lives of Africans under the 2014 Malabo Declaration and outlined in the Africa's Agenda 2063”, the FAO Director-General said.

More than 300 people are participating in the event, including 51 African ministers of agriculture and related sectors, as well as technical experts and development specialists, representatives of regional organizations and institutions, members of civil society, and the private sector.

The ongoing El Niño cycle is affecting large parts of the African continent, especially the southern sub-region as well as parts of East Africa, notably Ethiopia and Tanzania, and has taken a major tool on agriculture, he noted, while conflicts in the Central African Republic, Somalia, and South Sudan continue to have serious food insecurity repercussions.

FAO is working in all these hotspots, providing farmers with seeds, tools, and other support vital to maintaining and strengthening their ability to produce food and earn income.

"These crisis vividly remind us of the importance of scaling up resilience interventions targeting vulnerable populations whose livelihoods mainly depend on agriculture, livestock, fisheries forestry and other renewable natural resources," according to Graziano da Silva.

He also underscored the importance of preventing future disease epidemics like Ebola, which impacted food security and people's livelihoods in West Africa. FAO has recently launched a five-year programme in Africa to monitor and tackle emerging pandemic threats at their source in animals, working in 13 countries, he said.

Delivering on the 2025 Zero Hunger challenge as part of the Sustainable Development Goals (SDGs) will require the efforts of an alliance of partners, and

“FAO stands ready to support Africa member states in the delivery of the SDGs in firm collaboration with the African Union, other regional institutions and humanitarian and development partners,” Graziano da Silva said.

In support of CAADP, FAO has participated in the formulation of 95 agriculture and food security investment projects in 40 countries in Africa, with financial support from partners such as the AfDB World Bank and IFAD, the agency's Director-General pointed out.

And in 2012 FAO helped pioneer the innovative Africa Solidarity Trust Fund (ASTF), which mobilizes funds donated by African countries in support of food security projects in less-well off parts of the continent. So far, $34.5 million have been allocated to 15 programmes and projects in 36 different countries, boosting efforts to eradicate hunger.

He encouraged governments to continue to resource the fund, which is working to transforming African agriculture and make it an engine for shared growth and prosperity.