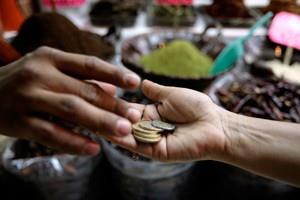 A high price to pay: The poorest of those most affected by high food prices spend over 75 percent of their income on food.

26 January 2011, Rome - FAO has called upon countries to carefully examine the implications of high food prices and not to take any policy actions that might appear useful in the short term but could have harmful, longer-term effects or even aggravate the situation.

The agency today published an updated guide for policy-makers in developing countries to assist them in addressing the negative impacts of high food prices or to tap into their opportunities.

"The experience of the 2007-2008 food crisis shows that in some cases, hastily taken decisions by governments to mitigate the impact of the crisis, have actually contributed to or exacerbated the crisis and aggravated its impact on food insecurity," said Richard China, Director of FAO's Policy and Programme Development Support Division.

"Export restrictions, for example, applied by some surplus food-producing countries, exacerbated the global food market situation during the 2007/2008 crisis. FAO strongly advises against such measures, as they often provoke more uncertainty and disruption on world markets and drive prices up further globally, while depressing prices domestically and hence curtailing incentives to produce more food."

The FAO Food Price Index, a measure of basic food prices at international level, peaked in December 2010. "With this new price shock only two years after the crisis in 2007/08 there is a serious concern now about implications for food markets in vulnerable countries," added China.

The guidelines stress that low-income food-deficit countries have been hit hard by high food prices in recent years. Many of these countries have to pay larger food import bills when food prices are soaring. Almost all countries in Africa are net importers of cereals.

The people most affected by higher food prices are net food buyers such as urban residents and small farmers, fishers, foresters, pastoralists and agricultural labourers who do not produce enough food to cover their needs. The poorest among them spend more than 70-75 percent of their income on buying food.

Net food-exporters should benefit from high food prices and could experience an improvement in their terms of trade and more income. However, experience of the 2007-8 food crisis showed that a variety of supply side constraints limited the supply response to higher prices in most developing countries.

No 'one size fits all' solution

The FAO guide emphasizes that there is no "one size fits all" solution that can be applied with the same chance of success in every country. The mix of policy and programmatic actions has to be specifically adapted to local conditions and agreed upon by key stakeholders in each country.

In any case, "care should be taken not to adopt measures that could undermine the existing market," the report said. "Attempts should be made to get the full cooperation of market operators to address the situation. In cases where markets are malfunctioning or absent, it may be necessary to take extreme measures that shortcut market mechanisms. In this situation, interventions could also be used to help private sector operators emerge," the report said.

The report favours community seed production by farmer field schools, farmer groups or cooperatives, to enhance access to both traditional and improved seed varieties at the community level. The report urges countries to apply Integrated Pest Management (IPM), based on a thorough understanding of agro-ecosystems that will allow farmers to reduce the use of pesticides, as well as measures to reduce post-harvest losses and to adopt low-cost mechanical conservation agriculture.

The report also discusses instruments that can be used to target the food insecurity of the poor, such as safety net programmes based on food or cash transfers. The report mentions that it is extremely important to consider the interactions between safety nets and "development" interventions in order to build on potential synergies and to avoid having either type of intervention undermine the other.