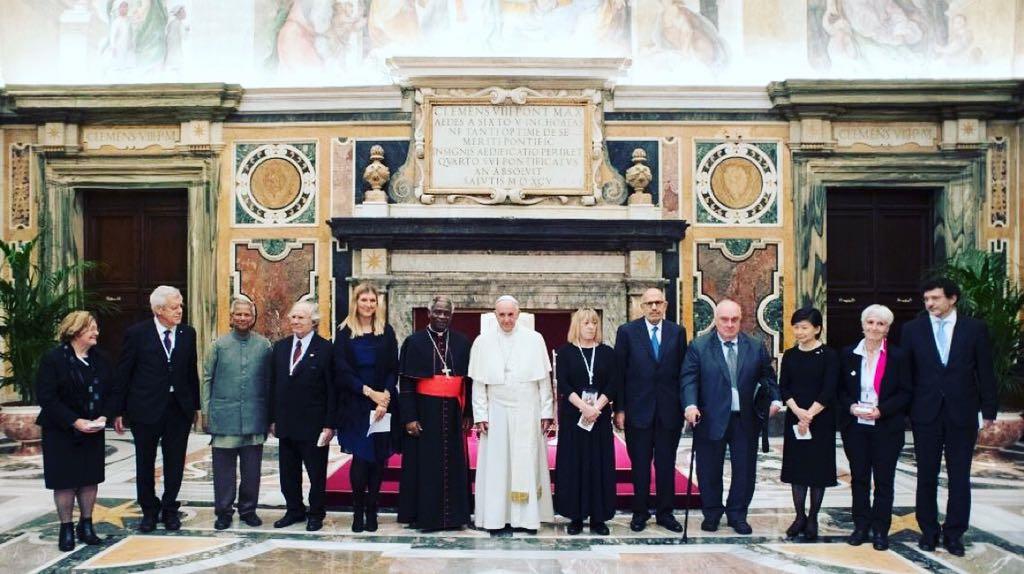 10 November 2017, Rome - Pope Francis warned today that the real priorities facing humankind, including the fight against poverty, the promotion of peace, the undertaking of educational, ecological and healthcare projects, and the development of human rights, are relegated to second place as a result of the expenses incurred by nations in the escalation of the arms race.

"Weapons of mass destruction, particularly nuclear weapons, create nothing but a false sense of security. They cannot constitute the basis for peaceful coexistence between members of the human family, which must rather be inspired by an ethics of solidarity," the pontiff told participants  of the International Symposium on Disarmament Prospects for a World Free of Nuclear Weapons and for Integral Disarmament. .

Participants at the global event on atomic disarmament included 11 Nobel Peace Laureates, some of whom are part of FAO's Nobel Peace Laureates Alliance, a group aimed at tackling the twin problems of hunger and violence in the agency's ongoing work to promote sustainable development and resilience across the world. It includes Nobel laureates Oscar Arias Sánchez, Tawakkol Karman, Betty Williams and Muhammad Yunus.

"Freeing the world from hunger is essential if we want to build long-lasting peace", FAO Communications Director Enrique Yeves said in his introduction to the session "Perspectives for Integral Disarmament".

After steadily declining for over a decade, global hunger is on the rise again, affecting 815 million people in 2016, or 11 per cent of the global population. At the same time, multiple forms of malnutrition are threatening the health of millions worldwide.

The increase - 38 million more people than the previous year - is largely due to the proliferation of violent conflicts and climate-related shocks, according to FAO.

Rural areas and their populations continue to be the most affected by conflicts, as attacks on farming communities undermine rural livelihoods and displace people from their homes

"Just as conflict leads to hunger, hunger can also lead to conflict," Yeves said, noting that peace is a prerequisite to achieving food security and ending this "vicious circle."

He explained that nowadays more people have been forced to flee their homes than at any time since the Second World War as conflict is forcing people to leave their homes and their livelihoods behind. "Globally there are now around 64 million people forcibly displaced by conflict and persecution," he said.

The FAO Communications Director also warned that conflict has driven northeast Nigeria, Somalia, South Sudan and Yemen to the brink of famine and triggered acute food insecurity also in Burundi, Iraq and elsewhere.

He noted that 489 million of the 815 million chronically food-insecure and malnourished people in the world live in countries affected by conflict.

Agriculture is part of the solution

Given that more than 75 percent of the world's poor and food insecure depend on agriculture and natural resource-based livelihoods, in conflict situations, agriculture and food security can give new life to affected homes and communities, bringing people together and driving recovery.

"The right mix of humanitarian aid and rural development can set the foundations for rebuilding livelihoods," he said.