Slow Food and FAO launch “Quinoa in the Kitchen” 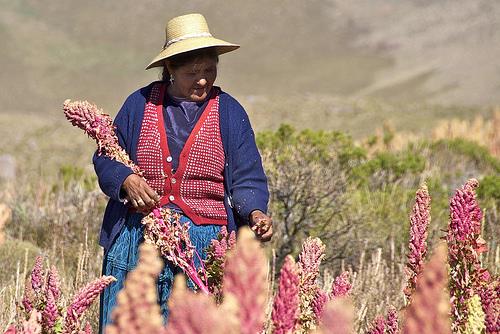 3 December 2013, Rome – The Slow Food movement and FAO officially launched the book, “Quinoa in the Kitchen,” today to continue to promote awareness about the super-food’s potential as the International Year of Quinoa draws to a close.

The book gives an overview of quinoa’s roots in the history and culture of the central Andean high plateau, geographically extending across the borders of Peru and Bolivia, which together account for the vast majority of quinoa production in the world.

Since quinoa is still new to many beyond the Andes, the book includes a selection of quinoa recipes created by some of the world’s top chefs. The aim is to bring quinoa to kitchens across the world, where it may someday be as commonplace as pasta or rice.

Quinoa is exceptionally versatile, which has drawn it attention as a potential alternative crop that could be an added tool to be able to produce sufficient food for the world’s growing population – expected to grow by 2 billion people by 2050 – as the climate shifts. Different varieties of quinoa can be grown from sea level to 4000 metres in altitude, it can withstand temperatures from below freezing to 38 degrees Celsius, in both humid and arid climates and in a variety of soil conditions.

"Quinoa is part of the effort to recover these lost foods and to promote traditional and forgotten crops. It is also part of the idea that food is not only a commodity. It is a lot more than that. It is also culture, it is also taste, it is also a lot of things that are closely related to our history,” said FAO Director-General José Graziano da Silva.

Slow Food President Carlo Petrini said that the book draws inspiration from the two organizations “shared vision of a sustainable world free from hunger and that safeguards biodiversity for future generations.”

“Central to the process is gastronomy itself and the idea that this holistic, multidisciplinary science, which encompasses everything from agriculture to history, from economics to anthropology, from botany to culinary art, can be a liberating force of the communities most hit by malnutrition,” he added.

Quinoa is higher in protein than grains such as wheat, corn or rice, and it packs in vitamins, minerals and essential amino acids that are important to human nutrition but which many foods lack in just one source.

FAO is currently overseeing a programme in Argentina, Bolivia, Chile, Ecuador and Peru for the sustainable intensification of quinoa farming and food production systems in the Andean region. FAO is assisting countries to respond to a rising demand for quinoa  so farmers can benefit from high prices while preserving the environment and biodiversity. Helping farmers to access the organic and fair trade sectors on international markets is one important element of the programme.

FAO is planning a regional project in arid and semi-arid areas of the Near East, where quinoa could prove useful to provide sufficient nutritious food even under extreme climactic conditions. In Algeria, Egypt, Iraq, Iran, Lebanon, Mauritania, Sudan and Yemen, varieties will be selected and field tested to gauge which types of quinoa have the highest yields and nutritional values even under stress, such as drought.

Similar projects are being developed for Bhutan, Brunei and Sri Lanka , as well as for Kygryzstan and Tajikistan.

The United Nations has declared 2013 the “International Year of Quinoa.”