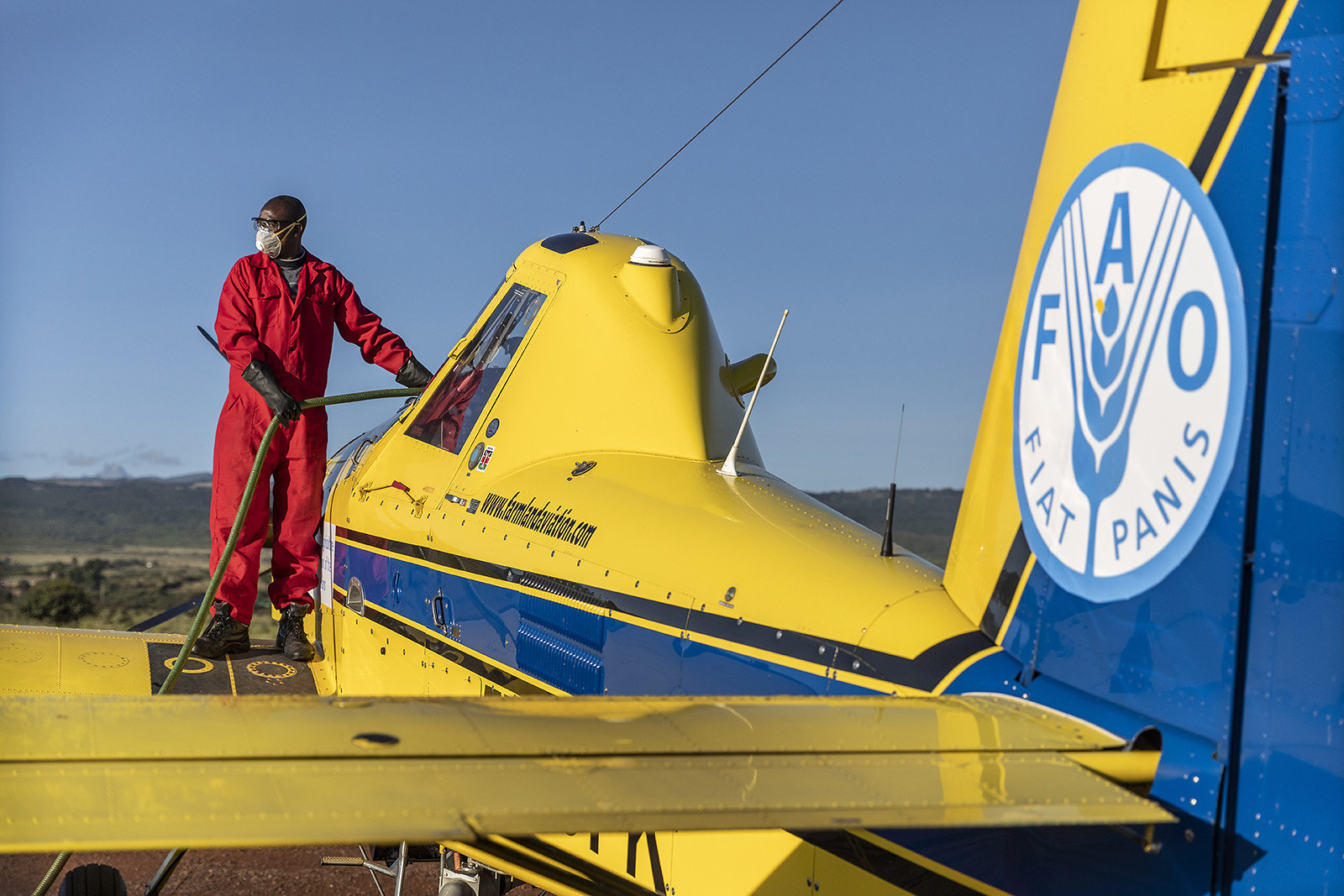 Desert Locust surveillance and control in Kenya, one of the countries that was hard hit by the locust emergency in the Horn of Africa.

Rome – While the Desert Locust upsurge that swept through the Horn of Africa and Yemen may be declining, it is critical to continue implementing control efforts against any new swarms and monitoring subsequent breeding in the region until at least the end of the year, according to the Food and Agriculture Organization of the United Nations (FAO).

A new $11.2 million partnership with the Mastercard Foundation means that locust surveillance and control efforts are now fully supported to the end of the year.

"Depending on weather conditions and our ability to reach breeding and migration areas, the upsurge could be over by the end of 2021 or in early 2022,” said Rein Paulsen, the Director of FAO’s Office of Emergencies and Resilience.

“Until then, we must not drop our guard. Thanks to the generous contributions of various partners, national teams guided by FAO experts are continuing to undertake the necessary survey and control operations in the affected countries.”

The campaign against Desert Locusts in the Greater Horn of Africa and Yemen has been underway since January 2020. FAO and the affected countries have gained major successes in containing the worst recorded locust upsurge in Ethiopia and Somalia in 25 years and the worst infestations seen in Kenya in70 years.

With the support of 29 partners and FAO’s own resources, more than $230 million was mobilized for the locust campaign. The Mastercard Foundation previously partnered with FAO in April 2020 contributing $10 million to the early detection of locust swarms, ground and aerial spraying operations, and impact assessments on the ground.

“The Desert Locust swarms weren’t just eating away at crops; they were eating away livelihoods, productivity, and the livelihoods of smallholder farmers. As a foundation committed to enabling access to opportunity in Africa, we felt compelled to step up and address the crisis. The progress FAO has made is deeply encouraging—and holding on to the ground gained is critical to a process of reclaiming hope for farmers and communities in the region,” said Daniel Hailu, Mastercard Foundation’s Regional Director, East and Southern Africa.

Control operations undertaken by FAO and its partners protected the livelihoods of more than 40 million people in rural areas, saving crops and pasture and thereby securing households’ cereal and milk supplies. FAO estimates that around 4.4 million tonnes of cereal crops and some 878 million litres of milk were saved and the value of saved production exceeded $1.7 billion.

“It was an extraordinary effort in a short space of time. Together, we not only controlled the onslaught of this insidious pest but FAO managed to strengthen locust fighting capacity in East Africa from near zero in some places to a high level of readiness,” said Paulsen.

The Desert Locust is considered the most destructive migratory pest in the world and a small swarm covering one square kilometre can eat the same amount of food in one day as 35 000 people.

Swarms the size of cities were vanquished and now a very small number of remnant swarms remain in Ethiopia and Somalia. Kenya is locust free and Djibouti and Eritrea are relatively calm and under control.

Despite progress, there is continuing concern about northern Ethiopia where new swarms have formed in the past month as local conflict has limited control operations. The swarms may pose a risk to the critical Meher season harvest, already anticipated to be 40 percent below normal.

FAO forecasts suggest these swarms will migrate north out of Ethiopia or into eastern regions of the country where control operations are possible. However, there is concern about how many might remain and whether they threaten crops in a highly food insecure region.

New swarms from Yemen where controls remain a challenge could also pose a threat if they move south across the Gulf of Aden and reinvade the Horn of Africa.

Livelihoods support for farmers and their families

Despite the success of the locust control operations, up to 2.5 million people were affected by the upsurge in 2020 in addition to at least another 1 million in early 2021.

FAO has been helping farmers who suffered locust damage with agricultural support packages, providing veterinary care for vegetation-starved livestock, and making cash transfers to families who have lost their crops so that they can purchase food.

To mitigate the devastating impact on livelihoods, FAO provided diverse support to over 300 000 farming, agro-pastoral and pastoral households, while an additional 347 000 families were assisted by partner non‐governmental organizations under the Regional Desert Locust Alliance (RDLA). Together, these activities assisted over 4 million people.

While regional and local preparedness and field operations are much improved, they can only be supported with effective forecasting and early warning, which FAO’s Desert Locust Information Service has been providing for more than 50 years.