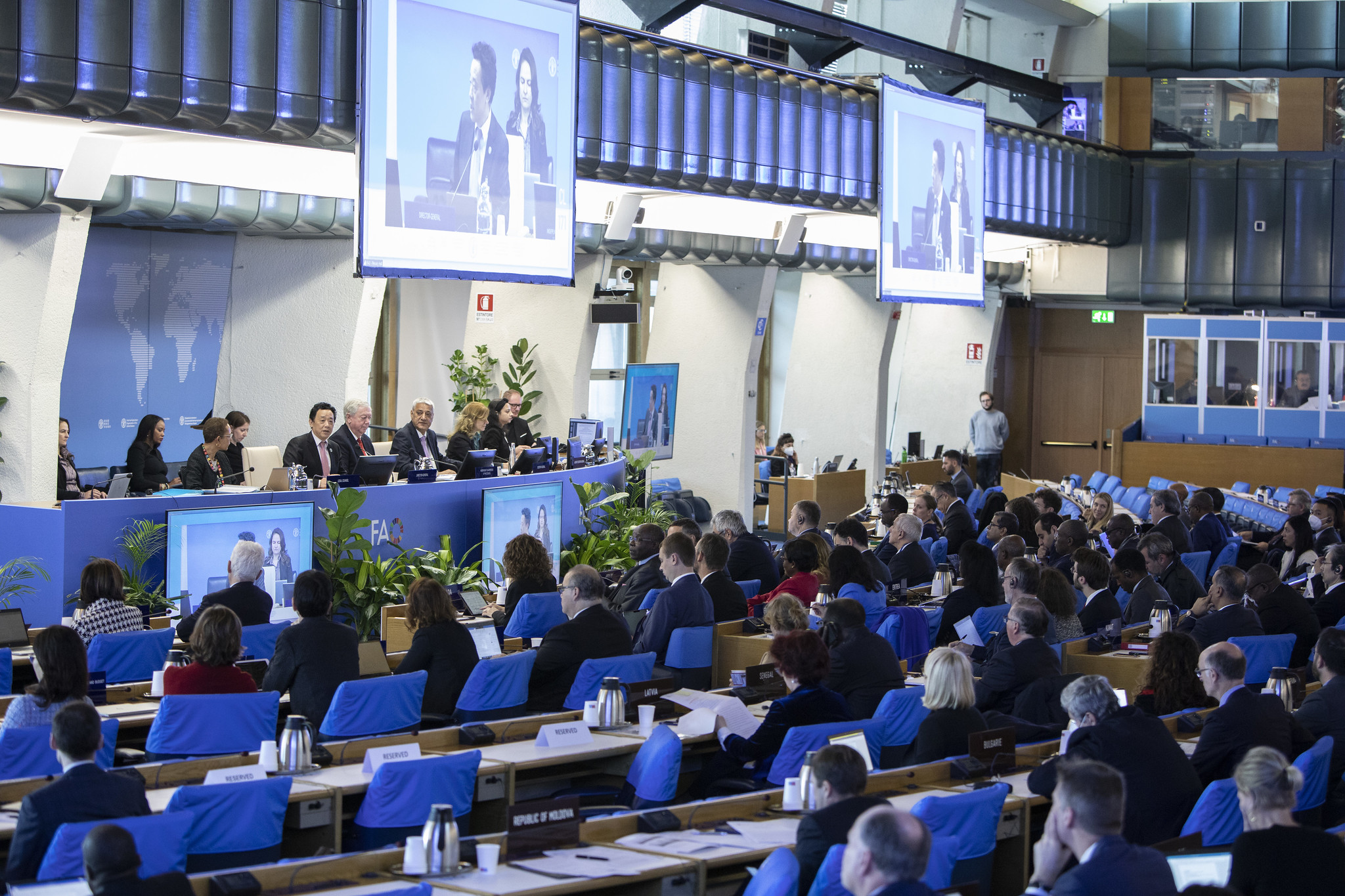 05/12/2022
Rome - For the Food and Agriculture Organization of the United Nations (FAO), 2022 has been as “extraordinary” as promised, in terms of circumstances, efforts and results, Director-General QU Dongyu said today in opening remarks to the 171st Session of the FAO Council.

He reported to Members that the Organization has successfully advocated for large-scale financial support for vulnerable countries in the face of rising food prices, proven its credibility as a development partner by mobilizing unprecedented levels of resources from donors, and demonstrated its effectiveness by reaching record numbers of people with life-saving and livelihood-supporting assistance.

Amid a wave of intense challenges including the COVID-19 pandemic, protracted conflicts, the climate crisis and the war in Ukraine, FAO “has demonstrated a readiness to adapt rapidly, and respond to changes agilely,” Qu said. “The Organization is now globally recognized as a professional, trusted partner of all stakeholders working to eradicate poverty, hunger and malnutrition,” he added.

“Our future strategic direction is transparent and inclusive, and includes all of you, working together towards our global goals,” the Director-General told delegates. FAO, and I, continue to be your partner on this extraordinary journey.”

“We have a strong FAO and can make it even stronger,” said Hans Hoogeveen, Independent Chairperson of the Council. Without intensified collaboration and action, the number of people suffering from hunger will rise above one billion in 2023, he warned.

Qu’s remarks represented a review of his 40 months in office, marked by values such as transparency, inclusivity, ethics and professionalism, a system-wide push to change the business model for how FAO works, and a wide range of institutional and strategic innovations. A transcript of his comprehensive address is available here.

FAO has already so far in 2022 mobilized $1.6 billion in voluntary contributions, considerably more than the $1.42 billion mobilized in 2021, which was the highest in FAO-s history and 22 percent above the five-year average.

FAO’s scaled-up efforts are on track to exceed the 30 million people reached in 2021 with urgently needed, life-saving and cost-effective assistance. Emergency and resilience programmes in countries with high levels of acute food insecurity have been stepped up, with reaching at least 60 million people per year by 2023 targeted.

By the end of 2022, FAO will be providing livelihood assistance to 9 million people in Afghanistan, half of the rural population in the country enduring IPC Phase 3+, a measure of acute food insecurity associated with crisis levels of hunger. Another 4 million will be reached in Ethiopia, Kenya and Somalia, subject to successive years of drought.

FAO has also provided additional storage capacity allowing farmers in Ukraine to store up to 6 million tonnes of grain whose export the war is impeding.

In the first 10 months of the year, FAO’s Investment Centre provided technical assistance to $7.6 billion worth of projects financed by international financial institutions, closing in on a target actually set for 2023. “That’s the value of FAO, and a big impact for Members,” Qu said.

Since 2019, FAO has more than doubled the amount of funding it has helped Members to access from the Green Climate Fund and the Global Environmental Facility, which has enabled more than 100 countries to mobilize more than $6 billion.

FAO’s proposed Food Import Financing Facility, designed to help countries with balance of payment problems due to food price trends, was adopted by the International Monetary Fund through a Food Shock Window. “That is real collective action” that could provide up to $32 billion in relief for the most needy, the Director-General said, noting that several countries have already made use of the facility.

The FAO-led Global Action for Fall Armyworm Control campaign has reduced crop losses by 5 to 10 percent and decreased the risk of further spread and infestation of a major plant pest. FAO’s leading role in the combating the Desert Locust crisis across the Horn of Africa and beyond over the past three years has contributed to mitigating potentially devastating consequences.

The Hand-in-Hand Initiative, the first strategic initiative launched under Qu’s leadership, now has 54 participating countries and is poised to expand to middle-income countries. Investment opportunities worth $3 billion, with 15 million direct and indirect beneficiaries, were presented to partners and stakeholders during the World Food Forum in October under this framework.

Qu expressed his thanks to all the donors and partners’ support for these extraordinary achievements.

The Director-General highlighted FAO’s efforts to empower women and youth, which he started immediately upon arrival in 2019 with the establishment of the FAO Women’s Committee and FAO Youth Committee.

The power of youth has been on display in the three World Food Forums held at FAO so far. Qu suggested that this will become a real global movement in the near future. One goal of the effort to increase youth engagement is to identify “actionable and out-of-the-box solutions to current and future challenges,” he said.

The FAO Women’s Committee has set up a joint mentorship programme and other partnerships to advance gender equality both inside FAO and around the world. FAO is now “one of the best” UN agencies in terms of meeting or exceeding the indicators set forth in the UN Action Plan on Gender Equality, he said.

A new global report FAO is preparing on the Status of Rural Women in Agrifood Systems will become a benchmark for more effective work in support of women, the Director-General said.

These and other FAO efforts are all driven by science and innovation, themes which are now enshrined in the FAO Strategic Framework 2022-31. “As a scientist, I have always been in the business of change,” Qu said. “That is the essence of science – adaptation to change.”

More details on the new FAO, including the ambitious digitalization of the Organization, the step change in private sector engagement and partnerships and its provision of knowledge products and global public goods, are available in the transcript of the Director-General’s remarks, available here.