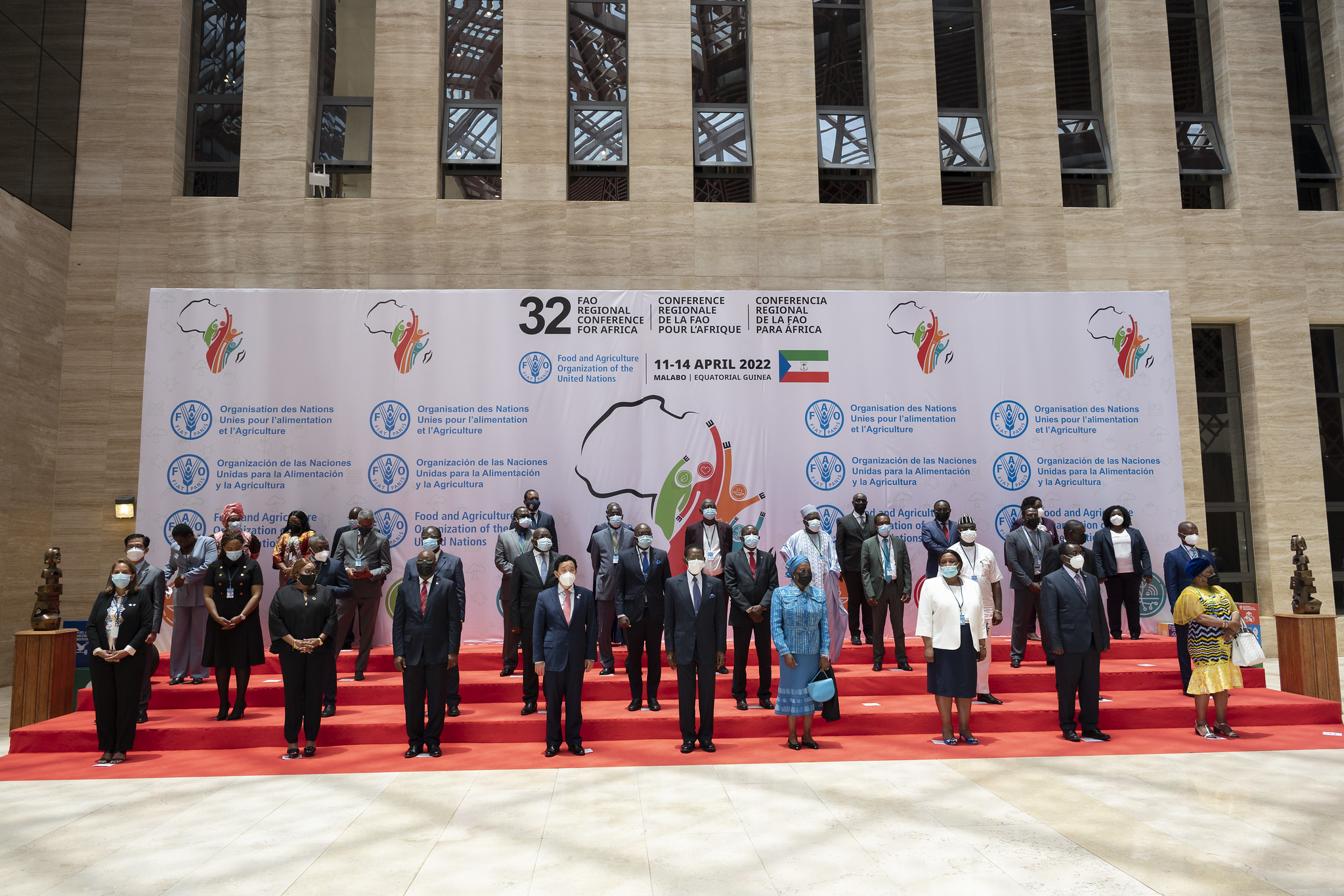 Malabo - Meeting Africa's overlapping challenges and realizing its enormous potential both require extraordinary efforts and new ways of working together, Director-General QU Dongyu said today as he opened the 32nd Session of the Regional Conference for Africa (ARC32) of the Food and Agriculture Organization of the United Nations (FAO).

The regional conference, held until April 14 in Equatorial Guinea's capital of Malabo and online, places the spotlight on the FAO Strategic Framework 2022-31 and its efforts to transform agrifood systems to be more efficient, inclusive, resilient and sustainable through the Four Betters: Better Production, Better Nutrition, a Better Environment and a Better Life for all, leaving no one behind.

The ministerial meeting is taking place as the continent's aim of ending hunger by 2025, as well as FAO's efforts to support Members achieve the Sustainable Development Goals by 2030, face an unprecedented confluence of obstacles.

On top of the climate crisis, long-standing regional conflicts and the ongoing COVID-19 pandemic, now in its third year, a severe drought is tightening its grip on East Africa. Most recently, the war in Ukraine is severely limiting the supply of wheat to Egypt and nearby countries, pushing up bread prices in the north of the continent.

The number of people going hungry in Sub-Saharan Africa is on the rise again after years of decline. According to the latest numbers available, 282 million people on the continent, or over one-fifth of the population, don't have enough food, representing a rise of 46 million from 2019.

"Like the tall ceiba tree on the flag of Equatorial Guinea, we too must stand tall in facing Africa’s many complex challenges," Qu told delegates in his opening statement.

This year's regional conference is hosted by the Government of Equatorial Guinea. It brings together agriculture ministers and other government officials from more than 50 African countries, along with civil society groups, the private sector, development partners and observer member countries.

The president of Equatorial Guinea, Teodoro Obiang Nguema Mbasogo, said the conference was taking place at a critical time for the region's economy and that there was an urgent need to transform our agrifood systems in a sustainable way.

Josefa Sacko, Commissioner for Agriculture, Rural Development, Blue Economy and Sustainable Environment at the African Union Commission also addressed the opening day of the conference, which is FAO’s highest governing body in Africa.

FAO is working on multiple fronts to help transform Africa's agrifood systems, which Qu says can play a central role in meeting the challenges of poverty, hunger, the climate crisis.

The Director-General also highlighted the desert locust control operations in eastern Africa as an example of quick and effective action on the ground, together with partners, under FAO's technical leadership.

"Africa has great potential for change and prosperity due to its rich natural resources and its large pool of innovative young people," Qu said. "You are here today as key leaders to drive this change. Let us be tall and strong like the ceiba tree, and continue to work together efficiently, effectively and coherently, and in a more innovative way for The Africa We Want!"

32nd Session of the FAO Regional Conference for Africa