Rising conflict, weather extremes, and economic instability aggravated by the lingering impacts of COVID-19 and the ripple effects of the war in Ukraine are among the key drivers 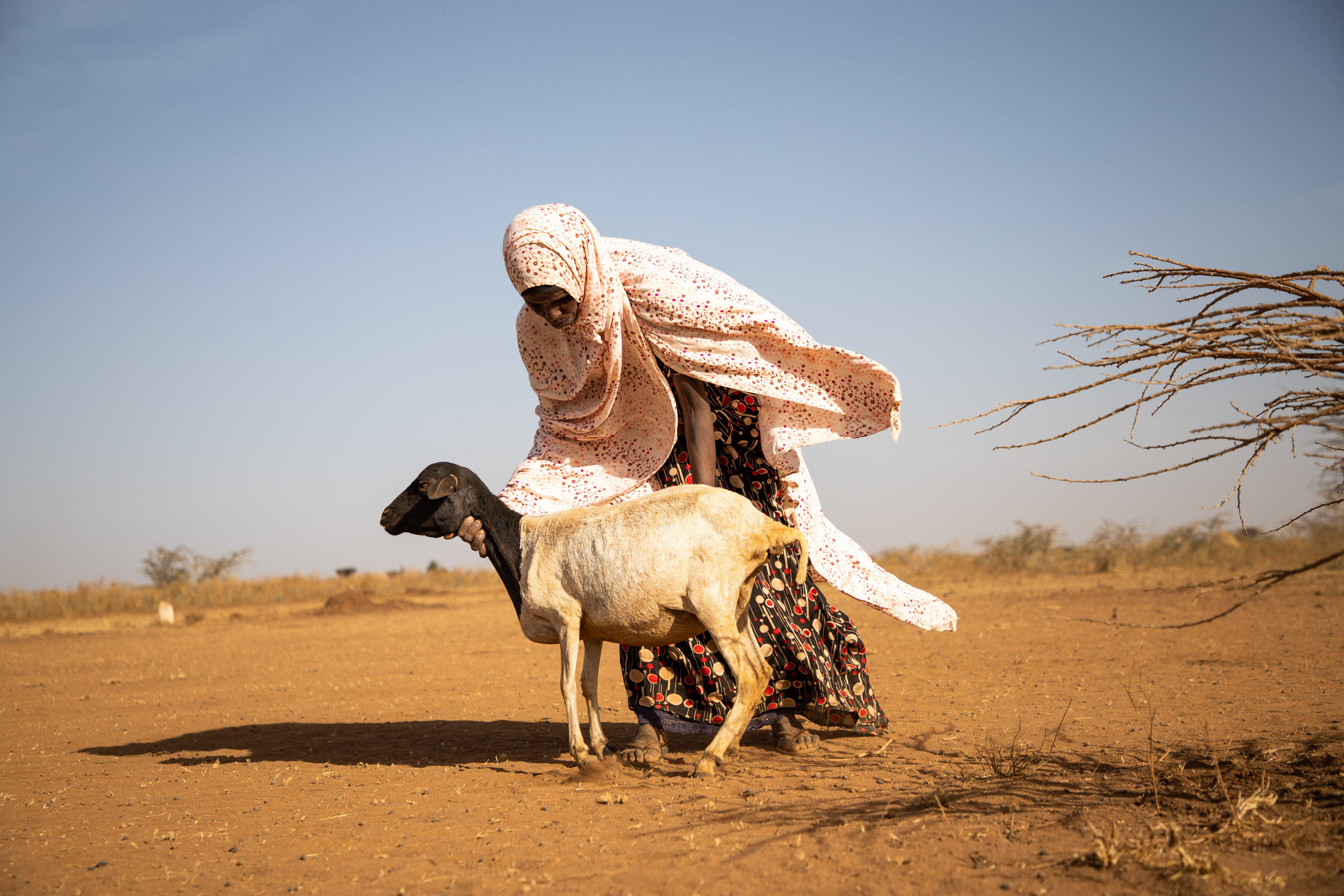 The report spotlights the hunger crisis in the Horn of Africa, where the longest drought in over 40 years is forecast to continue, Oromia and Somali regions, Ethiopia.

Rome – The number of people facing acute food insecurity worldwide is expected to continue to rise precipitously, as the food crisis tightens its grip on 19 ‘hunger hotspots’ – driven by rising conflict, weather extremes, and economic instability aggravated by the pandemic and the ripple effects of the crisis in Ukraine, a joint UN report released today has found.

The ‘Hunger Hotspots – FAO-WFP early warnings on acute food insecurity’ report - issued by the Food and Agriculture Organization of the United Nations (FAO) and the UN World Food Programme (WFP) calls for urgent humanitarian action to save lives and livelihoods and prevent famine in hotspot countries where acute food insecurity is expected to worsen from October 2022 to January 2023. The report lays out country-specific recommendations on priorities for anticipatory action – short-term protective measures to be put in place before new humanitarian needs materialize; and emergency response – actions to address existing humanitarian needs.

“The severe drought in the Horn of Africa has pushed people to the brink of starvation, destroying crops and killing livestock on which their survival depends. Acute food insecurity is rising fast and spreading across the world. People in the poorest countries in particular who have yet to recover from the impact of the COVID-19 pandemic are suffering from the ripple effects of ongoing conflicts, in terms of prices, food and fertilizer supplies, as well as the climate emergency. Without a massively scaled up humanitarian response that has at its core time-sensitive and life-saving agricultural assistance, the situation will likely worsen in many countries in the coming months,” said FAO Director-General QU Dongyu.

“This is the third time in 10 years that Somalia has been threatened with a devastating famine. The famine in 2011 was caused by two consecutive failed rainy seasons as well as conflict. Today we’re staring at a perfect storm: a likely fifth consecutive failed rainy season that will see drought lasting well into 2023. But the people at the sharp end of today’s crisis are also facing soaring food prices and severely limited opportunities to earn a living following the pandemic. We urgently need to get help to those in grave danger of starvation in Somalia and the world’s other hunger hotspots,” said David Beasley, WFP’s Executive Director.

The report spotlights the hunger crisis in the Horn of Africa, where the longest drought in over 40 years is forecast to continue - with the fifth failed rainy season in a row on the horizon - adding to the cumulative, devastating effects that successive rainfall deficits, economic crises and conflict have had on vulnerable households since 2020. Water scarcity has led to below average harvests, livestock deaths, and forced hundreds of thousands of people off their land in search of sustenance, while increasing the risk of intercommunal and resource-based conflict.

Up to 26 million people are expected to face Crisis or worse (IPC Phase 3 and above) levels of food insecurity in Somalia, southern and eastern Ethiopia, and northern and eastern Kenya. With humanitarian assistance at risk of being cut due to funding shortfalls, the spectre of large-scale deaths from hunger looms large in Somalia, with famine likely to take hold in the districts of Baidoa and Burhakaba in Bay region come October. Without an adequate humanitarian response, analysts expect that by December, as many as four children or two adults per 10 000 people will die every day. Hundreds of thousands are already facing starvation today with staggering levels of malnutrition expected among children under 5.

Globally, an all-time high of 970 000 people are expected to face catastrophic hunger (IPC Phase 5) and are starving or projected to starve or at risk of deterioration to catastrophic conditions in Afghanistan, Ethiopia, South Sudan, Somalia, and Yemen, if no action is taken – ten times more than six years ago when only two countries had populations in Phase 5.

According to the report, Afghanistan, Ethiopia, Nigeria, South Sudan, Somalia and Yemen remain at the ‘highest alert’ as hotspots, alone account for almost a million people facing catastrophic levels of hunger (IPC Phase 5 ‘Catastrophe’) with starvation and death a daily reality and where extreme levels of mortality and malnutrition may unfold without immediate action.

The Democratic Republic of the Congo, Haiti, Kenya, the Sahel, the Sudan and Syria remain ‘of very high concern’ with deteriorating conditions – as in the June edition of the quarterly report – but the alert is extended to the Central African Republic and Pakistan. Meanwhile, Guatemala, Honduras and Malawi have been added to the list of countries, joining Madagascar, Sri Lanka, and Zimbabwe that remain hunger hotspots.

Violent conflict remains the primary driver of acute hunger with analysis indicating a continuation of this trend in 2022, with particular concern for Ethiopia, where an intensification of conflict and interethnic violence in several regions is expected to further escalate, driving up humanitarian needs.

Weather extremes such as floods, tropical storms and droughts remain critical drivers in many parts of the globe, and a “new normal” of consecutive and extreme weather events is becoming clear - particularly in the hotspots. Devastating floods have affected 33 million people in Pakistan alone this year and South Sudan faces a fourth consecutive year of extreme flooding. Meanwhile, a third consecutive season of below-average rainfall is projected in Syria. Meanwhile, for the first time in 20 years, the La Niña climate event has continued through three consecutive years – affecting agriculture and causing crop and livestock losses in many parts of the world, including Afghanistan, West and East Africa and Syria.

On the economic front, the persistently high global prices of food, fuel and fertilizer – continue to drive high domestic prices and economic instability. Rising inflation rates have forced governments to enact monetary-tightening measures in advanced economies which have also increased the cost of credit of low-income countries. This is constraining the ability of heavily indebted countries – the number of countries increased significantly in recent years - to finance the import of essential items.

In the face of these macroeconomic challenges, many governments are compelled to introduce austerity measures affecting incomes and purchasing power – particularly among the most vulnerable families. These trends are expected to increase in coming months, the report notes, with poverty and acute food insecurity rising further, as well as risks of civil unrest driven by increasing socio-economic grievances.

Humanitarian assistance is crucial to save lives and prevent starvation, death and the total collapse of livelihoods – the report notes, highlighting that insecurity, administrative and bureaucratic impediments, movement restrictions and physical barriers severely limit humanitarian responders’ access to people facing acute hunger in eleven of the hotspot countries, including all six of the countries where populations are facing or are projected to face starvation (IPC Phase 5), or are at risk of deterioration towards catastrophic conditions.

The report calls for targeted humanitarian action to save lives and livelihoods in the 19 hunger hotspots, noting that in Afghanistan, Ethiopia, Nigeria, Somalia, South Sudan and Yemen, humanitarian action will be critical in preventing further starvation and death.

Identified through forward-looking analysis, the ‘hunger hotspots’ are areas showing the potential for acute food insecurity to increase during the outlook period. The hotspots are selected through a consensus-based process involving WFP and FAO field and technical teams, alongside analysts specialized in conflict, economic risks, and natural hazards.

The report is part of a series of analytical products produced under the Global Network Against Food Crises, to enhance and coordinate the generation and sharing of evidence-based information and analysis for preventing and addressing food crises.