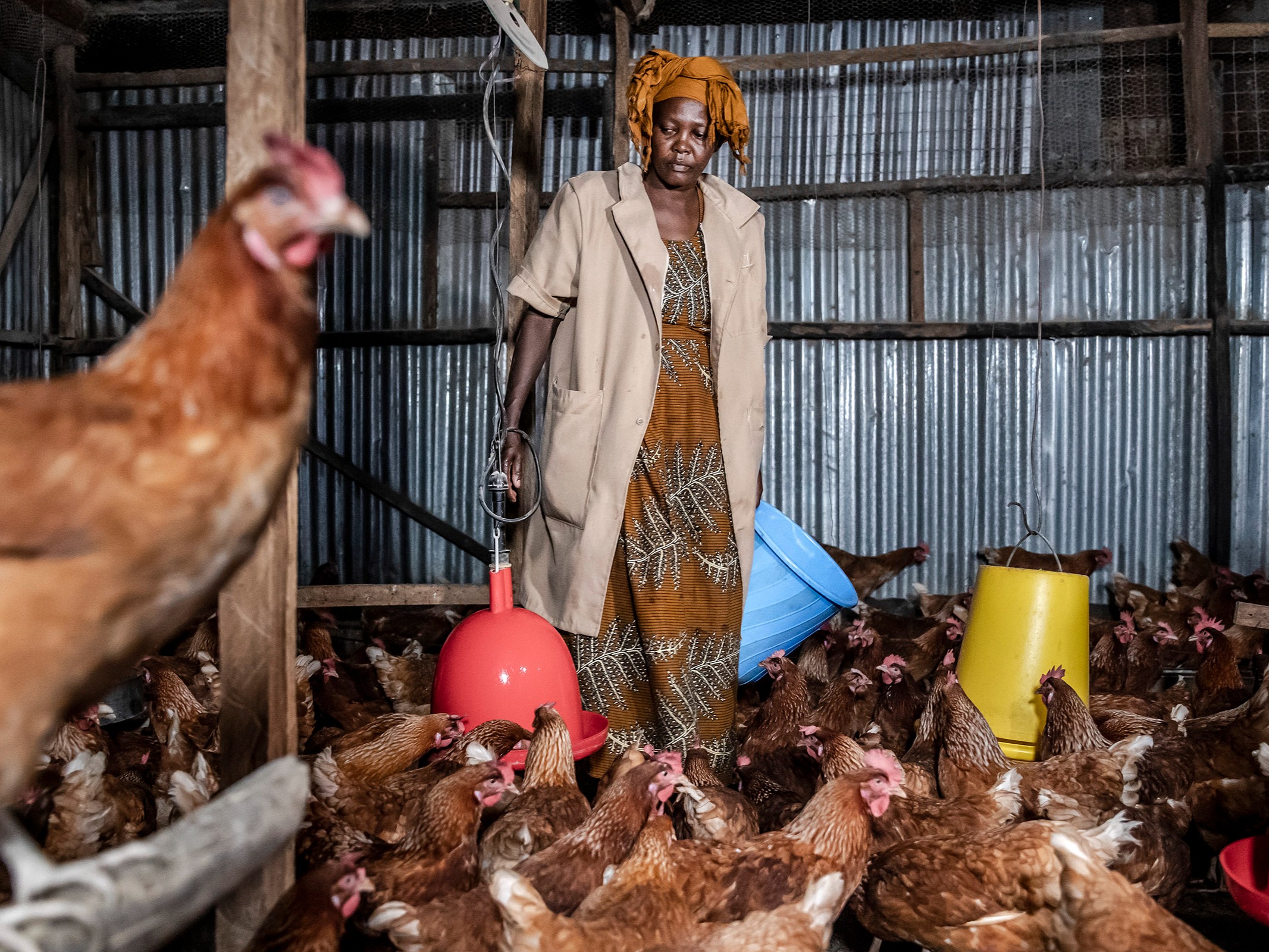 A poultry farmer in Kenya.

Keith Sumption, FAO’s Chief Veterinary officer, did his doctoral research decades ago in southern Africa, at a time when veterinary medicines to maintain livestock health were available only a few days out of each year. Today the problem is not availability but the wide use of these drugs, and therefore the growing resistance to their effectiveness. The benefits of access to medicines is being lost, with the concerns now for retaining access to essential, life-saving treatments. We ask him to explain the challenges for animals, crops and people posed by Antimicrobial Resistance (AMR) and how they can be tackled.

What is the scale and timeline of the AMR threat?

The usual estimates are that 700,000 people die from AMR related causes each year today, and that could soar to 10 million a year by 2050 if no actions are taken. It is safe to bet the first number is too low, with obviously scary consequences for the second one. We may soon reach a tipping point when AMR surpasses heart disease and other so-called lifestyle illness as the leading cause of death. We are trying to catalyze more awareness as our first priority, not least as the behaviour changes needed are complex, and we need more systematic high-quality data to support interventions and advocacy.

How might climate and extreme weather events affect it?

Many microbes thrive with warmer temperatures, so climate change is likely to increase the rate of transmission of the human, animal and plant diseases they can cause and of their resistance to treatment. At the same time, extreme weather events and natural disasters can damage infrastructure and frequently increase the population density in limited safe geographical areas, which can negatively impact on sanitation services and may be associated with disease spread and an increased use of antimicrobials. Climate change will also place an increased pressure on food production systems, which could lead to an increased use of antimicrobial drugs in agriculture to meet global demand for food. These are clearly unwelcome outcomes. Let me emphasize that the spread of AMR means we have fewer effective antimicrobials available. Our ability to rely on them to counter diseases will be reduced and we will therefore need to rely more on prevention measures – the ones we are trying to promote today.

Can the world’s agrifood sectors use less antimicrobials than they currently do?

First, let me note that demanding reduced use of antimicrobials is far too simplistic. Managing animal disease risks is not a choice but a necessity. Take livestock, a family could lose their entire life’s savings if their cow dies from a disease that could be easily treated with antimicrobials. However, the need to use antimicrobials can be decreased through for instance good animal hygiene and management, choice of adequate breeds, enhanced animal nutrition and welfare, biosecurity, etc… It’s similar with crops: Much can be achieved with good soils, good genetic selection and good seeds, and sometimes more is needed. Antimicrobials are used in crop protection as well, notably with rice, tomatoes and citrus. If there were to be a sudden worldwide stop to the use of antimicrobials, without the adoption of other practices to prevent and control animal and plant diseases, there would be major disruptions with consequences for food security and incomes, especially for many of the most vulnerable people. Given that the risks to livelihoods are greater in some regions, it may be wise for higher-income countries, where antimicrobials have been used on farms since the 1950s, to help less developed countries take a progressive approach while providing resources to encourage improvements in farm-level biosafety and biosecurity.

Still, yes, antimicrobial use can be reduced. But doing so requires giving livestock and crop producers clear alternatives. This has proven difficult, partly because antimicrobials are viewed as a quick fix to underlying problems. We need to focus on alternatives that do not compromise on animal health, welfare and productivity. Moreover, we need to devote more attention to the antimicrobials present in waste from people and animals that leaches into the environment. Weaning ourselves off antimicrobials and towards better health status – and I am talking about One Health which includes peoples, animals, plants/crops and the environment – entails making options available, through appropriate policies, better communication, and fostering ease of adoption. In a way AMR is a kind of lifestyle disease too.

Is AMR a risk for aquaculture, the fastest growing food production sector?

Aquatic organisms are surrounded by a soup of microbes, some of which are potential pathogens depending on a variety of factors specific to the host, pathogen and environment. They circulate in both wild and farmed populations of aquatic organisms often without expression of clinical disease or mortality.  Good aquaculture and biosecurity practices including the prudent and responsible use of antibiotics are key to disease prevention and health management. Use of alternatives to antibiotics that stimulate animals’ protective immune response, both humoral or cell mediated, may reduce the likelihood of AMR. A few examples that have had some levels of success include vaccination, probiotics and prebiotics in feed, managing gut microbiome, plant therapy and use of specific pathogen-free stocks.

Should we aim to eliminate use of antimicrobials?

It is imperative to recognize that AMR can arise even without direct use. Antimicrobial resistance traits can spread and multiply through soils, water systems, and other vectors, and contaminated environments may even favour that. Biosecurity measures such as improving hygiene on farms can mitigate this but can be resource intensive. Some of the highest levels of AMR today are in low and middle-income countries, suggesting that other factors such as poor sanitation matter as much if not more than the scale of antimicrobial use.

The goal is not to eliminate antimicrobials – but to preserve their utility. If anything, we need more innovation of products. And it also points to a greater role for livestock vaccines. And of course a lot of work on the ambient factors I just mentioned, including hygiene and more nutritious livestock feed to assure healthy and productive animals.

We may not be in the dark ages for global surveillance of AMR in animals but we do need much better data. That said, the main warning signs of multiplying resistant microbes have been picked up by testing in hospitals and laboratory testing in human medicine, which is much more intensive than in animal health, where due to capacity constraints we rely on more of a passive monitoring approach. There is no doubt that building confidence in our agri-food systems is going to require better data and better monitoring. The more progress we make on reducing use of antimicrobials, the more we will need stronger testing regimes to detect both disease and emergent resistance. That is good risk management. Again, in the long run we will not have a choice.

What is FAO doing about AMR?

A lot! FAO has projects in more than 40 countries to reduce AMR in aquatic and terrestrial animal health and production, food and feed safety, genetic resources, crop production, natural resource management, risk communication and behavioral science. The new FAO Action Plan on AMR 2021-2025 focuses on increasing stakeholder awareness and engagement, strengthening surveillance and research, and a host of other governance and sustainable resource allocation areas. FAO, the World Organisation for Animal Health (OIE) and the World Health Organization (WHO) have since 2018 joined forces as a Tripartite to further their longstanding partnership with a central focus on tackling AMR. The UN Environment Programme is a major ally in this effort. We are setting up an AMR Multi-Stakeholder Partnership Platform to bring together private and public stakeholders across the human, animal, plant and environment spectrum.

But let me highlight the kind of work on the ground that can generate real local impacts and inspire more pathways for real progress. Antimicrobials are both bought and sold, and in many parts of the world this happens in ways with little oversight or in situations where both parties have little scientific information, let alone awareness of AMR risks. Meanwhile, there are around two million para-professionals who manage these transactions in Africa and Asia alone. These paraprofessionals should be able to benefit from being certified experts, meaning that the inputs they provide may not only be products but also in the form of guidance to use less antimicrobials, and that they will wish to maintain that advantage through ongoing training. With the support of the Bill and Melinda Gates Foundation’s first investment in AMR-related issues, we are running pilot programmes in Nigeria, South Africa and Uganda.

The scheme paves the way for some self-reinforcing behavioural nudges that may be expanded to include better data, which is in short supply in many places. Big Data has been helpful for industrial agricultural efficiency, and ultra-local data can have a similar upside by allowing a producer to measure their own results or compare their outputs with their neighbours. A key trigger here is to help paraprofessionals transition from selling goods to selling services. A more robust role for paraprofessionals would likely also help combat the proliferation of substandard and falsified products. It might also allow for more incisive contributions to the global fight against AMR from big players in global value chains, such as those that make cutting-edge animal and plant health products. At FAO we are keen on creating ways for the private sector to contribute to driving standards up for everyone, in particular for the small-scale providers from whom most people get their food.