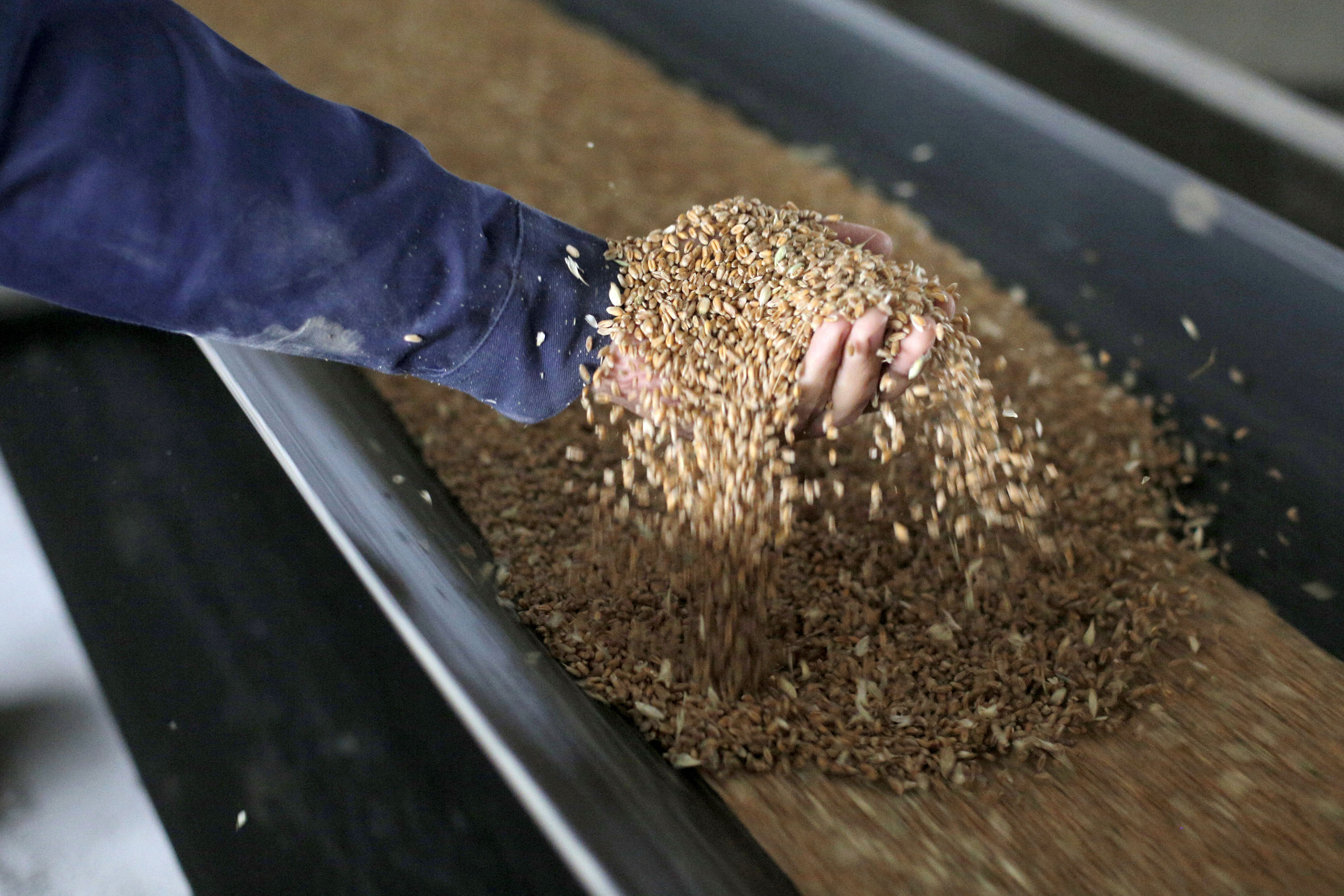 An employee shows wheat grains on a conveyor belt during its loading for storage in tanks at the Chernihiv granary, Ukraine.

Rome - The world food price barometer surged to a new peak reaching its highest level since July 2011, the Food and Agriculture Organization of the United Nations (FAO) reported today.

The FAO Food Price Index, which tracks monthly changes in the international prices of a basket of food commodities, averaged 133.2 points in October, up 3 percent from September, rising for a third consecutive month.

The FAO Cereal Price Index in October increased by 3.2 percent from the previous month, with world wheat prices rising by 5 percent amid tightening global availabilities due to reduced harvests in major exporters, including Canada, the Russian Federation and the United States of America. International prices of all other major cereals also increased month-on-month.

The FAO Meat Price Index slipped 0.7 percent from its revised value in September, marking the third monthly decline. International quotations for pig and bovine meats fell amid reduced purchases from China of the former and a sharp decline in quotations for supplies from Brazil of the latter. By contrast, poultry and ovine meat prices rose, boosted by high global demand and low production expansion prospects.

The FAO Sugar Price Index dropped by 1.8 percent from September, marking the first decline after six consecutive monthly increases. The decline was mainly the result of limited global import demand and prospects of large exportable supplies from India and Thailand as well as a weakening of the Brazilian Real against the US dollar.

Record cereal output in 2021 but stocks set to decline

Despite an expected record world cereal production in 2021, global cereal inventories are seen heading for a contraction in 2021/22, according to new forecasts in FAO’s Cereal Supply and Demand Brief, also released today.

The forecast for world cereal output in 2021 is now pegged at 2 793 million tonnes, down by 6.7 million tonnes since the previous report in October, largely due to cuts to the estimates of wheat production in the Islamic Republic of Iran, Turkey and the United States of America.

By contrast, global coarse grains output has been revised upwards. An upward revision to maize production was driven by better-than-previously expected yields in Brazil and India and improved prospects in several West African countries. Compared to last year, global cereal production is anticipated to increase and reach a new record level.

Forecast at 2 812 million tonnes, world total cereal utilization in 2021/22 is heading for a 1.7 percent gain from the 2020/21 estimated level, led by an anticipated increase in global food consumption of wheat, rising in tandem with world population, while foreseen higher feed and industrial uses of maize should also contribute to the expected annual increase.

World cereal stocks by the close of seasons in 2022 are forecast to fall 0.8 percent below their opening levels, to 819 million tonnes. Consequently, the world cereals stocks-to-use ratio is forecast to decline slightly, from 29.4 percent in 2020/21 to 28.5 percent in 2021/22, but still indicating an overall comfortable level.

Following an upward revision this month on stronger-than-earlier-anticipated global trade in wheat and rice, world trade in cereals is now forecast to expand and reach a new record in 2021/22 at 478 million tonnes, up 0.3 percent from the 2020/21 level.