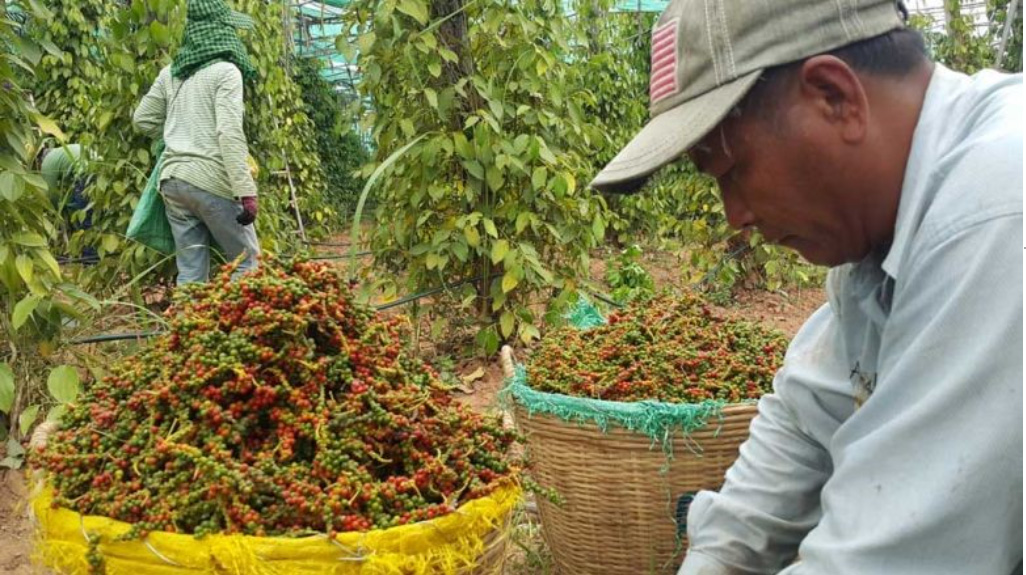 Key messages
Kampot pepper has not only expanded export volume to new high-value markets, but also gained a significant price premium following the establishment of the geographical indication (GI). The Ministry of Commerce has rigorous mechanisms in place to maintain the credibility of the GI status for export markets.

Background on Kampot Pepper geographical indication (GI)
Located in the south of Cambodia, Kampot province is home to large pepper plantations. Kampot pepper varieties are known for the mildness of their spice, the freshness and complexity of their aromas as well as their exceptional, lingering taste, allowing it to gain international acclaim as one of the finest pepper varieties in the world. The Kampot pepper geographical indication (GI) covers green, black, red and white peppers. Kampot pepper has benefitted from a broad reputation since the thirteenth century, mainly due to its quality, and even today. For example, at the 2022 Great Taste awards, out of the nine spices awarded the maximum of three stars, six were brands of Kampot pepper.1 Its quality has been specifically recognised for its quality by a British chef Rick Stein and is used in many fine restaurants worldwide. It is also recognised as belonging to the historical and cultural heritage of Cambodia.

A unique characteristic of Kampot pepper is its link with the agro-environment – the influence of the weather, coastal climate and the unique conditions of the soil. The Kampot pepper production zone is located in the district of Kampong Trach, Dan Tong, Toeuk Chhou, Chhouk and Kampot City in Kampot province, as well as Kep City and Damnak Chang Aeur district in Kep province (see figure 1).  Production techniques (i.e. irrigation and natural fertilisation) vary, according to the environment of the production zone. 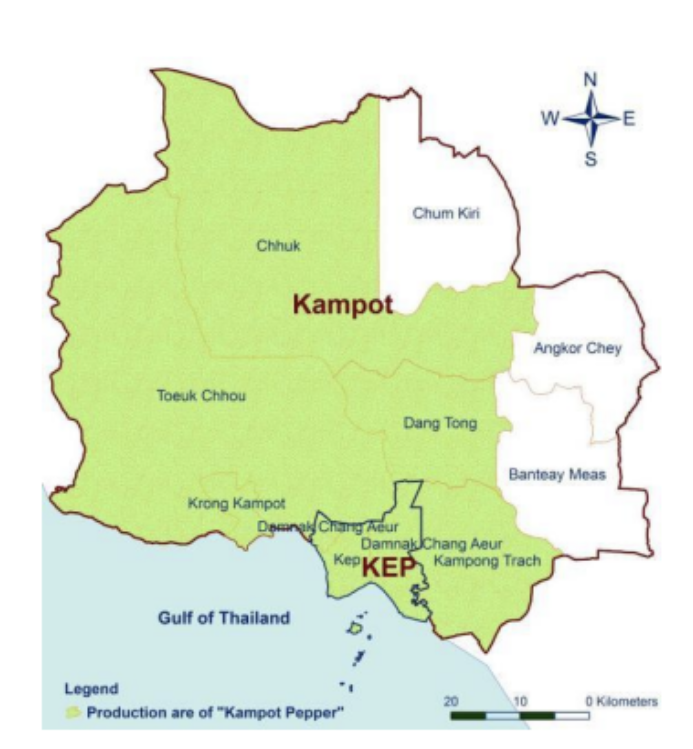 Key Issues/ Problem statement/challenges
Kampot pepper had limited international brand recognition in the high value international markets and was regarded as a low volume niche product previously recognised domestically and in neighbouring countries only. Whilst it has a unique heritage spanning many centuries, processes focusing on product quality was limited, so were international marketing and quality standards.

A significant challenge was to establish and coordinate the standards with producers and to change their methods to meet the required standards.

Kampot pepper was awarded GI registration by the Cambodian Ministry of Commerce in January 2014 and by the European Union in February 2016. All mechanisms are in place and pursuant to the provisions of the law, agricultural goods, foodstuffs, handicraft goods or any other goods produced in the geographical area fall under the scope of the geographical indication registration.

In order to prevent misuse or expropriation of GI and to allow it to play its role as a sign of a specific quality linked to geographical origin, for producers, consumers, local and global stakeholders, a set of common rules was prepared and established to:

A traceability and control mechanism is in place which guarantees the quality assurance of the product and of the geographical origin, fostering consumers’ confidence and trust. There is also a “product specification” document which stipulates the procedures and requirements for local producers and supports coordination and cohesion among those producers to create, preserve or improve the products’ reputation and brand value under GI. This document also supports the green credentials of the product and forbids the use of chemical fertilisers and pesticides as required for GI.

The Ministry of Commerce certifies all protected geographical indications in the Kingdom of Cambodia, administers the national logo and authorise its use.

The conditions for the use of the national logo are:

Achievements & Impact:
A strong mechanism and enforcement of the GI law by the Royal Government of Cambodia along with a strong collaboration with private sector, development partners, as well as the producers association has brought the great success in promoting brand and protection of Kampot Pepper.

Data from the Kampot Pepper Promotion Association (KPPA) shows that membership has increased from 118 producers in 2010 to 386 producers today, of which approximately 80 percent were smallholders with fewer than 1 000 pepper poles (based on the latest KPPA website data).  This suggests that smallholders were significant beneficiaries of the GI certification for Kampot pepper and the related improvement in poverty reduction. GI greatly contributes to an effective development of the value chain and improved market access, resulting in an increased income for smallholder farmers. Under GI, producers are required to maintain the reputation of their pepper products for being fine and organic, which allow great success in promoting the brand. Adopting organic and good agricultural practices is an effective way to promote sustainable agriculture production.

Land designated for Kampot pepper cultivation has increased from just 1 hectare in 2010 to 264 hectares today – exclusively in Kampot and Kep provinces. Annual production also substantially increased from around 20 tonnes annually in 2013 (before GI certification) and increased further following EU GI certification in 2016 with production stabilising at the level of 100 tonnes since 2019 (see figure 2). 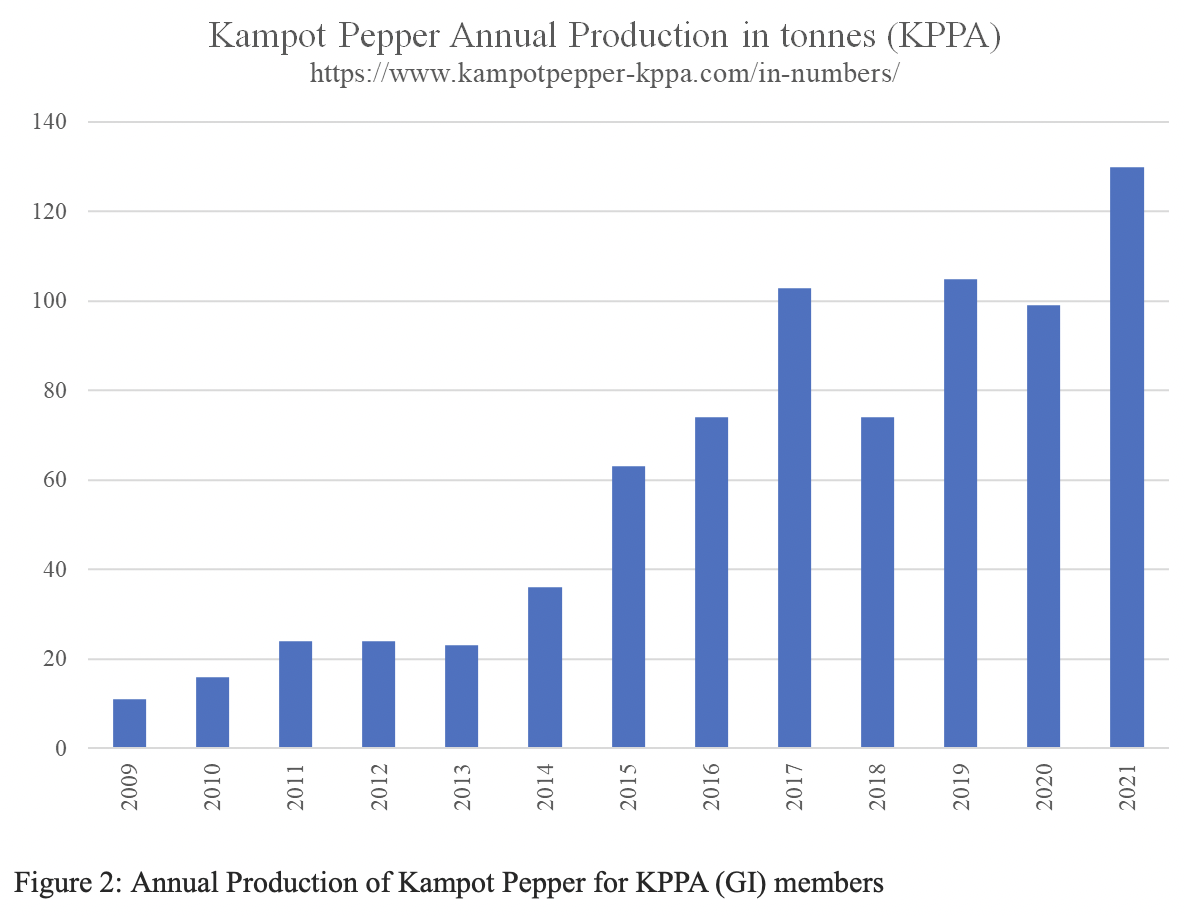 According to Sok (2021) and figures from MAFF (2017), exports of Kampot pepper also significantly increased following the GI accreditation with the EU by more than 250 percent in 2017 compared to the average export level of 2013–2016. Access to new higher value markets has become possible, particularly Germany and the United States of America, building on the existing key export partners such as France, Taiwan Province of China and Viet Nam.

The story of Kampot pepper indicates that the investment required to implement the GI programme has shown strong gains for producers. Kampot pepper also has the potential to grow further through public–private partnerships and increased international marketing.