The State of World Fisheries and Aquaculture 2020

1 Unless otherwise specified, throughout this publication, the term “fish” indicates fish, crustaceans, molluscs and other aquatic animals, but excludes aquatic mammals, reptiles, seaweeds and other aquatic plants.
2 The 156 million tonnes refer to the amount –in live weight equivalent - available for human consumption.

The world’s appetite for fish and fish products shows no sign of slowing. This report demonstrates the significant and growing role of fisheries and aquaculture in providing food, nutrition and employment.

The fisheries and aquaculture sector significantly expanded in the past decades and total production, trade and consumption reached an all-time record in 2018.

However since early 1990s, most growth in production from the sector as a whole has been from aquaculture, while capture fisheries production has been relatively stable, with some growth essentially concerning inland capture

Rise in global capture fisheries production from 1990 to 2018

Rise in global aquaculture production from 1990 to 2018

Sustainable aquaculture development and effective fisheries management are critical to maintain these trends. For fisheries, there is growing evidence that when they are properly managed, stocks are consistently above target levels or rebuilding. However, the successes achieved in some countries and regions have not been sufficient to reverse the global trend of overfished stocks.

In places where fisheries management is not in place, or is ineffective, the status of fish stocks is poor and deteriorating. Although 78.7% of all landings of marine fisheries come from biologically sustainable stocks, the unequal progress in fisheries management highlights the urgent need to replicate and re-adapt successful policies.

More needs to be done to ensure fisheries and aquaculture around the world are sustainable. Failure to implement adequate measures threaten the contribution of the sector to food security and livelihoods.

In 2018, total global capture fisheries production reached the highest level ever recorded at 96.4 million tonnes - an increase of 5.4 percent from the average of the previous three years (Figure 1).

The increase in 2018 was mostly driven by marine capture fisheries, with production from marine areas increasing to 84.4 million tonnes in 2018 – up from 81.2 million in 2017.

Where does it come from?

The most popular fish species to be caught was anchoveta (Engraulis ringens) over 7 million tonnes, with Peru and Chile accounting for most of the increase in catches in 2018. This follows relatively low catches for this species in recent years.

Catches of tuna and tuna-like species continued their year-on-year increase, reaching their highest levels in 2018 at over 7.9 million tonnes, mostly the result of catches in the Western and Central Pacific. This was achieved alongside better fisheries management, resulting in the number of overfished stocks decreasing to reach 66.7 percent of tuna and tuna-like stocks at sustainable levels.

World aquaculture production attained another all-time record high of 114.5 million tonnes in live weight in 2018 (Figure 8), with a total farmgate sale value of USD 263.6 billion (the price of the product available at the farm, excluding any separately billed transport or delivery charge.)

The total production consisted of:

World aquaculture production of farmed aquatic animals has been dominated by Asia, with an 89 percent share in the last two decades or so. Among major producing countries, China, India, Indonesia, Viet Nam, Bangladesh, Egypt, Norway and Chile, have consolidated their share in regional or world production to varying degree over the past two decades.

Fishers and fish farmers across the world

Across the world, the fisheries and aquaculture sector is a major source of employment.

In 2018, an estimated 59.5 million people were engaged in the primary sector of fisheries and aquaculture (Table 12).

In total, about 20.5 million people were employed in aquaculture and 39.0 million in fisheries, a slight increase from 2016.

World employment for fishers and fish farmers, by region

NOTE: The regional and global totals have been adjusted in some cases as a result of extended work on the dataset to revise historical data and improve the methodologies applied for estimations.
SOURCE: FAO

Overall, the highest numbers of fishers and aquaculture workers are in Asia, taking 85 percent of the world total.

The FAO figures tell us that women account for just 14 percent of the 59.5 million people engaged in the primary sector of fisheries and aquaculture in 2018.

Instead when considering both the primary and secondary fisheries and aquaculture sectors, many authors and non-governmental organizations (NGOs) report that one out of two workers is a woman.

Why is caring about gender important?

Women play a crucial role throughout the fish value chain, providing labour in both commercial and artisanal fisheries and acting as small-scale entrepreneurs where capital allows.

However, gender studies and approaches have shown how women are often assigned the most unstable roles, or poorly paid or unpaid positions that require lower qualifications – most often in the secondary sector – and are often under-recognized or not recognized at all in the sector.

How does the world’s fishing fleet measure up?

In 2018, the total number of fishing vessels across the world was estimated to be 4.6 million.

Reflecting its high number of workers in the fisheries and aquaculture sector, Asia continues to have the largest fleet with 3.1 million vessels accounting for 68 percent of the global total.

The global total of motorized vessels has remained steady at an estimated 2.9 million vessels, or 63 percent of the total fleet. This stability masks regional trends, including decreases since 2000 in Europe and 2013 in China due to efforts to reduce fleet sizes.

Are we using our fishery resources sustainably?

In order to measure the progress towards SDG 14, a key indicator is the proportion of fish stocks that are within biologically sustainable levels. This can help estimate the sustainability of the world's marine capture fisheries.

Unfortunately, the percentage of fish stocks that are within biologically sustainable levels have decreased from 90 percent in 1974 to 65.8 percent in 2017 (Figure 19).

78.7 percent of current landings come from biologically sustainable stocks. Landings are defined as the catches of marine fish that are brought into foreign or domestic ports.

However, there is some good news…

In general, intensively managed fisheries have seen decreases in average fishing pressure and increases in stock biomass, with some reaching biologically sustainable levels.

This uneven progress highlights an urgent need to replicate and re-adapt successful policies and measures.

The 25th Anniversary of the Code of Conduct for Responsible Fisheries

The Code of Conduct for Responsible Fisheries, unanimously adopted by FAO Members in 1995, is a foundational document that sets out globally agreed principles and standards for the use of fisheries and aquaculture resources. It has now been twenty-five years since it was first adopted. In that time, the Code has informed the development of international instruments, policies and programmes to support and address new and emerging issues in fisheries, such as sustainable aquaculture development, ocean degradation, social responsibility, biodiversity conservation and climate change.

Every two years FAO carried out a Questionnaire on the Implementation of the Code of Conduct for Responsible Fisheries and Related Instruments. FAO sends the questionnaire to all Members, regional fishery bodies (RFBs), and selected non-governmental organizations.

The most recent results were positive. At the regional and global level, the questionnaire responses indicate a strong trend toward improvements in fisheries management in both marine fisheries and inland fisheries.

Members have been expressing an interest in better guidance on the governance of small-scale fisheries since the mid-2000s, especially with regard to safety at sea since 2009. The questionnaire reveals that the importance of aquaculture in national agendas grew significantly between 2011 and 2018.

How is fish used?

In 2018, about 88 percent of the 179 million tonnes of total fish production was utilized for direct human consumption.

A significant but declining proportion of world fisheries production is processed into fishmeal and fish oil. Fishmeal and fish oil are still considered the most nutritious and most digestible ingredients for farmed fish, and fish oil represents the richest available source of long-chain polyunsaturated fatty acids (PUFAs), which perform a wide range of critical functions for human health. However, their inclusion rates in compound feeds for aquaculture have shown a clear downward trend.

How much is lost or wasted?

A large proportion of fisheries and aquaculture production is either lost or wasted - 35 percent of the global harvest.

This must be reduced to improve the efficiency and sustainability of the sector, through appropriate policies, regulatory frameworks, capacity building, services and infrastructure, as well as physical access to markets.

Fish is crucial to a nutritious diet in many areas across the world.

Fish and fish products are recognized not only as some of the healthiest foods on the planet, but also as some of the least impactful on the natural environment. For these reasons, they are vital for national, regional and global food security and nutrition strategies, and have a big part to play in transforming food systems and eliminating hunger and malnutrition

Mainly found in fish and seafood, these fatty acids are essential for optimal brain development.

Seafood is in practice the only natural source of this crucial nutrient. Iodine serves several purposes like aiding thyroid function. It is also essential for neurodevelopment.

Another nutrient crucial for mental development, this vitamin also regulates the immune system function and is essential for bone health.

During pregnacy, iron intake is crucial so that the mother can produce additional blood for herself and the baby.

Aquaculture has expanded fish availability to regions and countries with otherwise limited or no access to the cultured species, often at cheaper prices, leading to improved nutrition and food security. At the global level, since 2016, aquaculture has been the main source of fish available for human consumption. In 2018, this share was 52 percent, a figure that can be expected to continue to increase in the long term.

What is driving this increase?

Reductions in loss and waste

Increased awareness of the health benefits of fish

Fish and fish products are some of the most traded food items in the world – so it’s no surprise that in 2018, 67 million tonnes of fish (live weight equivalent) was traded internationally for a total export value of USD164 billion. This equates to almost 38 percent of all fish caught or farmed worldwide.

However, trade has recently hit a downturn. Available estimates for 2019 suggest that total trade value contracted by about 2 percent in both quantity and value compared with the previous year. The outbreak of coronavirus disease (COVID-19) has already negatively impacted trade among key exporters and importers in 2020.

Who are the biggest exporters?

In addition to being by far the major fish producer, China has also been the main exporter of fish and fish products since 2002.

Since 2004, Norway has been the second major exporter, now followed by Viet Nam (Figure 29). While developed markets still dominate fish imports with the European Union 3 followed by the United States of America and Japan, the importance of developing countries as consumers as well as producers of fish and fish products has been steadily increasing.

Note: The COVID-19 pandemic has affected most countries in the world, with severe impacts on the global economy. The following projections are based on the assumption that there will be a significant disruption in the short run for production, consumption and trade, with a recovery in late 2020 or early 2021.

World fish production, consumption and trade are expected to increase, but with a growth rate that will slow over time.

Asia will continue to dominate the aquaculture sector and will be responsible for more than 89 percent of the increase in production by 2030. The sector is expected to expand most in Africa - up 48 percent - driven by the additional culturing capacity put in place in recent years.

In nominal terms, prices in the fishery and aquaculture sector are expected to rise in the long term up to 2030.

3 Here, the European Union is considered as the EU27.

Trade in fish and fish products is expected to increase more slowly than in the past decade. 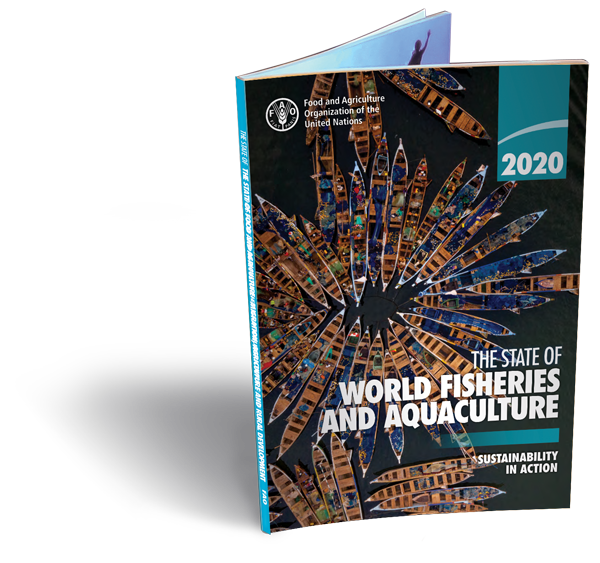