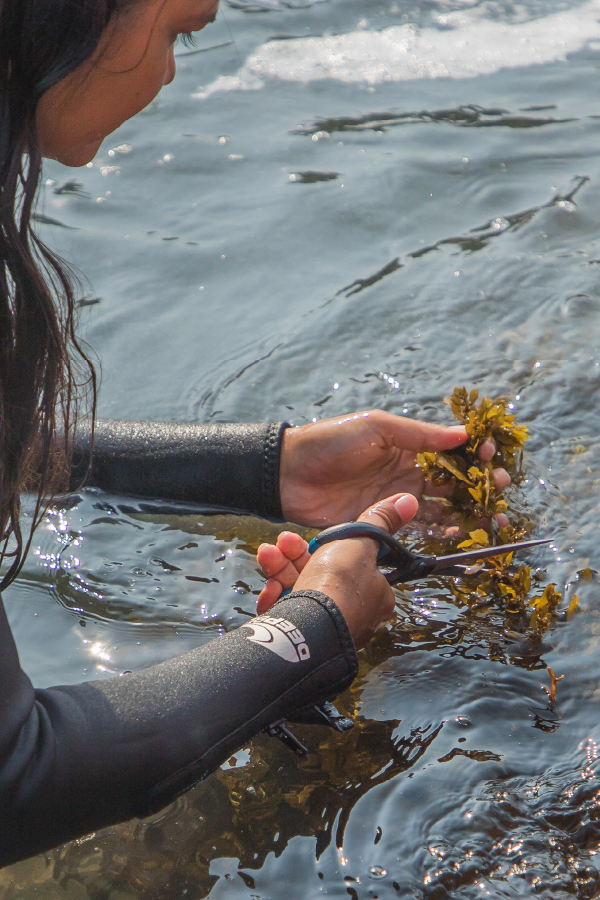 “India’s coastline has over 800 species of edible seaweed that can be incorporated into our local diets.”

Growing up on the coast of Goa sparked a fascination in Gabriella D’Cruz for exploring the tidepools of the Arabian Sea. Over the years, this passion has abided, and now as the 2021 Food Chain Global Youth Champion, she is devoting herself to helping coastal communities rely on the sea for their livelihoods.

Gabriella’s overriding interest is in small-scale production of seaweeds to benefit local producers and consumers. After working as a marine conservationist in different parts of India, she was drawn back to her childhood roots – the seaweed forests of the coast of Goa. These ecosystems support a high level of biodiversity, everything from fish and crustaceans to shellfish and turtles. But it is the seaweed that is key to maintaining this biodiversity. It also captures carbon, reduces ocean acidification and soaks up excess nutrients.

Gabriella and her colleagues have begun a pilot project to counter the extraction of marine resources by growing seaweed and mussels on floating bamboo rafts. Promoting seaweed as a primary food is not an easy task but, as Gabriella points out, seaweed has many uses such as in bioplastics, cosmetics, animal feed, and more. Through The Good Ocean enterprise that Gabriella initiated in 2020 she hopes to secure a reliable market for high quality seaweed among the many local restaurateurs, who are already showing an increasing interest.

“India’s coastline has over 800 species of edible seaweed that can be incorporated into our local diets” Gabriella says. “I strongly believe that switching to regenerative food products like seaweed and mussel consumption instead of continuing with extractive fisheries like bottom trawled shrimp capture is a step in the right direction.”

FAO’s Chief Scientist, Ismahane Elouafi, is very supportive of Gabriella’s efforts, and encourages her to maintain and cultivate her passion. Ismahane envisages tremendous potential in seaweed farming to diversify food sources and she looks forward to seeing its sustainable expansion. The Government of India also recognizes the potential of seaweed farming and has recently proposed to invest USD 100 million in the industry.

There is a good chance that this food hero’s childhood fascination will one day transform livelihoods on the coast of Goa, and maybe even beyond.