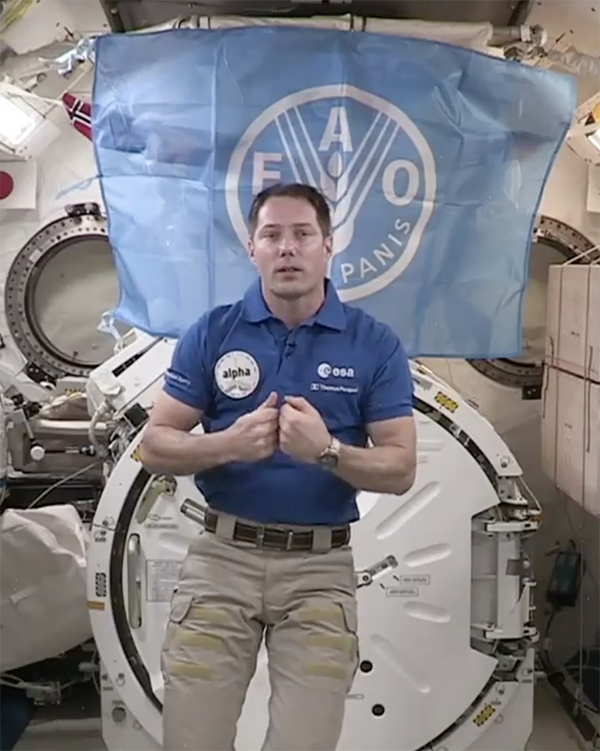 “When I came back to Earth from this privileged viewpoint that allowed me to see so much, I was looking for a way to take action.”

Thomas Pesquet, a European Space Agency (ESA) astronaut and FAO Goodwill Ambassador, advocates for climate action. He promotes awareness of FAO’s science-based work with countries to transform agri-food systems and improve food security, improve access to sustainable healthy diets and tackle food waste. As an astronaut, he is in a unique position to garner his experience and knowledge on space technology to raise awareness about these issues.

Pesquet’s experience on board the International Space Station (ISS) in 2016 and 2017 prompted him to take action. He witnessed with his own eyes the devastating impact of climate change from above from deforestation to water and air pollution, acknowledging our planet’s fragility and dependency on finite resources.

His recent designation as an FAO Goodwill Ambassador in April 2021 underlines how space science and technology play an increasingly important role in FAO’s mission to end hunger. FAO collaborates with ESA to help countries use satellite data to improve agricultural policy-making. ESA’s satellite monitoring can also assist countries in their efforts to deliver on the Paris Agreement.

“We can no longer postpone climate action because climate change is not on hold.”

Thomas Pesquet returned to the ISS for a 6-month mission in April 2021. His mission patch now features the seventeen colours of the Sustainable Development Goals, demonstrating his commitment to play a role in achieving a better world for people and the planet. He also flies with a UN and FAO flag.

“I want to bring awareness to the fight against food insecurity and hunger and I want to highlight the relationships between our respective organizations that work together on a daily basis.”

As an engineer and food hero, Pesquet promotes a science-based and evidence driven approach to fostering change, which is technological but human-centred. His efforts contributes to SDG2, Zero Hunger by bridging the gap between different actors who collaborate to tackle climate change, foster sustainable solutions and generate greater public awareness.