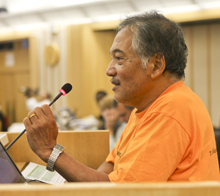 Narayan Kaji Shrestha has won the first-ever Collaborative Partnership on Forests Wangari Maathai Award for his outstanding contribution to forests.

Dr Shrestha is recognized as one of main architects of the community forestry movement in Nepal, which he has spent three decades promoting and which has contributed significantly to restoring forest resources in the country.

He guided early attempts to create a more participatory approach to community decision-making, reaching out to women and low-caste villagers and initiating the country’s first user-managed community forestry group.

In addition to influencing legislation, Dr Shrestha provided leadership to the national organization that later became the Federation of Community Forestry Users in Nepal and continues to be a guide and mentor to many practitioners and leaders involved in participatory resource management.

Dr Shrestha received the USD 20,000 award at a ceremony at FAO headquarters in Rome during the FAO Committee on Forestry and 3rd World Forestry Week meetings. 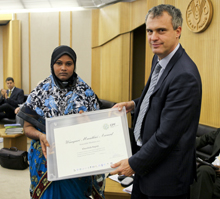 The jury also awarded Kurshida Begum of Bangladesh an Honourable Mention prize for her work helping women in her village form a community patrol group alongside forest department guards to protect the forests and biodiversity of the Tenkaf Wildlife Sanctuary from illegal logging and poaching.

Her work has helped women gain an effective voice in their community, provided them with a steady source of income and has helped her communicate the importance of forest and natural resource issues to visitors to the sanctuary.