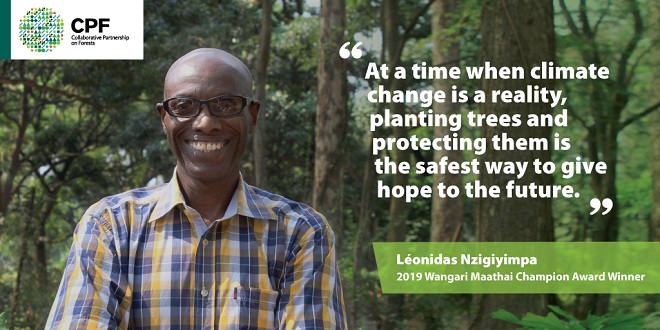 Burundian forestry activist Léonidas Nzigiyimpa was awarded the 2019 Wangari Maathai Forest Champions Award in recognition of his passionate commitment and outstanding contribution to improving forests and the lives of indigenous peoples, women and youth in his country.

Mr. Nzigiyimpa is known for his tireless efforts sometimes at risk of his personal safety to boost food security and living standards of local populations in his country. He was also instrumental in improving education for children in such areas as ecology, restoration and sustainable forest management.

Among other achievements, Mr Nzigiyimpa led the first effort in the history of Burundi to involve indigenous peoples in sustainable forest management.

The winner of the 2019 Wangari Maathai Forest Champions Award was announced during a ceremony at the 25th World Congress of the  International Union of Forest Research Organizations (IUFRO) in Curitiba, Brazil, on 30 September.

Accepting the award, Nzigiyimpa said: "I decided to embark young people by connecting them to their nature, educating them, influencing them and finally changing them:  as the youth is the future of my country, planting trees is also planting for the future."