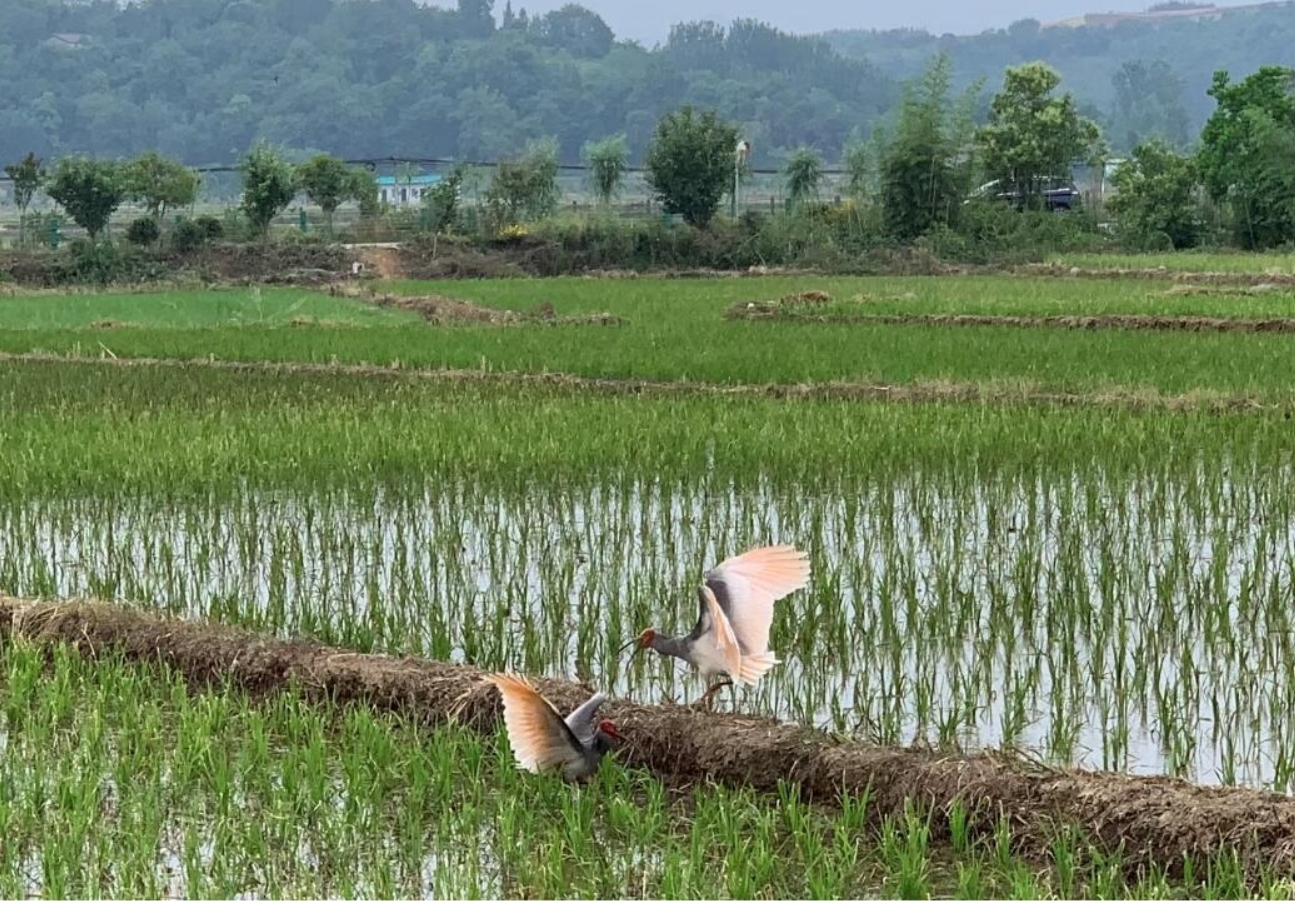 Crested Ibis (Nipponia nippon) is an endemic bird to East Asia, but faced extinction due to environmental degradation. Following the rediscovery of the bird in Yang county in 1981, conservation effort began by prohibiting the use of pesticides and fertilizers in the crested ibis activity area in the same year, and establishing the Yang County Crested Ibis Protection Observation Station in 1983. It has been added to the International Union for Conservation of Nature (IUCN) Red List of Threatened Species since 2001.

Black rice in Yang county is oblong in appearance with the gray-brown colour of rice husk. Transplanting of seedlings is in May–June, and harvested in September. It is said to have a long history dating back 3 000 years, and was once served as a tribute to the imperial court due to its unique characteristics and flavour. In 2006, Yangxian black rice was designated as a national geographical indication (GI) product.

Problem statement/Key issues
To protect the habitat for crested ibis, conventional agricultural practice had to be changed to organic farming.

Key initiatives/process
The conservation activities for crested ibis have been implemented by involving domestic and international experts. An observation station was also established at the province level. Breeding farm was expanded in 2002. In 2005, the State Council approved the establishment of Shaanxi Hanzhong Crested Ibis national Nature Reserve, followed by a series of regulations to protect wetland, ecological environment, and wild life in the province between 2006 and 2010.

As an effort to pursue balanced development between environmental protection and economic activities, a cooperative was established in Caoba village in 2009 to undertake organic farming. The government also began to boost its support to organic farming in Yang county since 2010. In 2015, the National Certification and Accreditation Administration (CNCA) awarded Yang county the status of “National Organic Product Certification Demonstration Zone”.

Along with the environmental conditions, planting management measures and standards have been instituted for Yang black rice. For example, the organic planting base has been monitored under video surveillance throughout the whole process, while products quality is tested at laboratory in batches, and storage in fresh-keeping boxes and product circulation can be traced back through QR code. Marketing activities are also supported through cooperation with a marketing cooperative in the province as well as the private businesses.

Such information was captured and compiled by GIES initiative. The dataset for Yangxian black rice and crested ibis, covering from 2000 to 2020, includes the following: (1) physical geographical data, such as boundary of case area, digital elevation model (DEM), climate (temperature and precipitation), land use patterns, soil and water quality; (2) black rice variety characteristics, such as sensory characteristics and nutritional values; (3) business and management, such as social and economic institutions and their performance, products and branding, and plant management practice; and (4) historical culture of black rice in Yang county.

Impact
The cooperative in Caoba village has successfully established 403 ha of organic farmland, and attained organic standards for its 35 kinds of agricultural products, including black rice and other items such as golden pear, rapeseed oil, sesame oil and vegetable chips. Its brand is protected for its trademark and has received several honours, such as the National Top Ten Organic Planting Technology Demonstration Base. The cooperative’s organic products are sold to more than 20 cities in the country, including Beijing, Shanghai and Guanzhou, while its organic rice, with the annual output of 700 tonnes, is also certified by European Union.

By 2020, a total of 35 organic production enterprises have been established in Yang county, 15 categories and 85 kinds of organic products have been certified, from 144 200 mu of land (9 614 ha) and with an output of 36 900 tonnes and the output values exceeding 1 billion Yuan.

In May 2021, after 40 years from the rediscovery, the world population of crested ibis increased from seven in 1981 to over 7 000 in 2021. Of which, more than 5 000 birds were in Shaanxi province alone, and more than 3 000 Crested ibis were in Hanzhong city where Yang county belong.

Good practices/lessons
Environmental protection has been successful by creating a shared value among the people in the area. In Yang county, the protection of the rare bird species necessitated change of conventional agricultural practice for farmers, which might not be easy for them. This challenge was converted to an opportunity to seize the organic market. Organic certifications and designation as a GI product have been also helpful. The history and stories behind have added more value to Yangxian black rice.

Organic farming is made possible by setting and enforcing a set of rules and regulations as well as providing extension services to ensure good practices, controlling post-harvest handling and facilitating market linkage. Cooperation among public and private stakeholders cannot be disregarded.

A comprehensive dataset prepared by GIES is helpful for the stakeholders, and any person who is interested, to understand how the organic black rice industry has been developed in tandem with the protection of natural habitat for the endangered species. Information may exist, but compilation in one dataset makes the data finding and access simple.