In AQUASTAT, three types of water withdrawals are distinguished: self-abstracted agricultural, self-abstracted industrial and municipal (including domestic) water withdrawal. A fourth type of anthropogenic water use is the water that evaporates from artificial lakes or reservoirs associated with dams. Information on evaporation from artificial lakes is being processed to also become available in the AQUASTAT database.

For Africa, Asia, Latin America and the Caribbean, AQUASTAT obtains water withdrawal values from national ministries or other governmental agencies, although some data gaps are filled from other UN agencies. For Europe and for Northern America, Japan, Australia and New Zealand, Eurostat and OECD are valuable additional sources of information, and are also used to fill data gaps.

Information on water use by source involves surface water, groundwater and direct use of non-conventional sources of water, i.e. municipal wastewater and agricultural drainage water for irrigation purposes and desalinated water.

The amount of precipitation falling on land is almost 110 000 km3 per year. About 56 percent of this amount is evapotranspired by forests and natural landscapes and 5 percent by rainfed agriculture. The remaining 39 percent or 43 000 km3 per year is converted to surface runoff (feeding rivers and lakes) and groundwater (feeding aquifers). These are called renewable freshwater resources. Part of this water is being removed from these rivers or aquifers by installing infrastructure. This removal of water is called water withdrawal. Most of the withdrawn water is returned to the environment some period of time later, after it has been used. The quality of the returned water may be less than the quality when it was originally removed.

In AQUASTAT, three types of water withdrawal are distinguished: agricultural (including irrigation, livestock and aquaculture), municipal (including domestic) and industrial water withdrawal. A fourth type of anthropogenic water use is the water that evaporates from artificial lakes or reservoirs associated with dams. Information on evaporation from artificial lakes will be available in the AQUASTAT database in the near future.

At global level, the withdrawal ratios are 69 percent agricultural, 12 percent municipal and 19 percent industrial. These numbers, however, are biased strongly by the few countries which have very high water withdrawals. Averaging the ratios of each individual country, we find that "for any given country" these ratios are 59, 23 and 18 percent respectively. 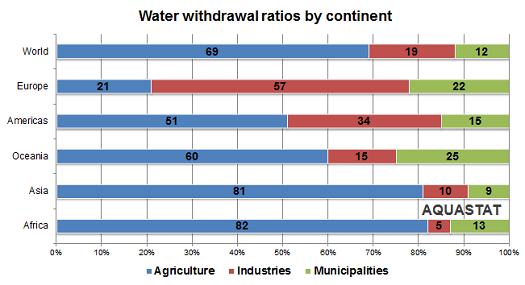 The chart below shows global water withdrawal over time by by the three major sectors: agriculture (including irrigation, livestock watering and cleaning, aquaculture), industries, municipalities. 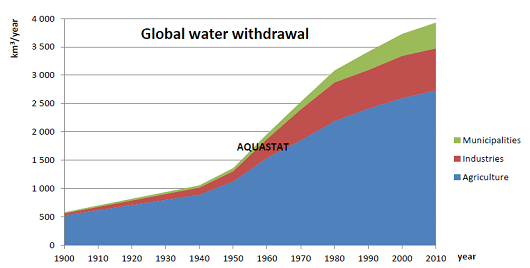 The chart below shows global water withdrawal over time with in addition to the water withdrawal by the three major sectors – agriculture (including irrigation, livestock watering and cleaning, aquaculture), industries, municipalities – the evaporation from reservoirs, which are artificial lakes created when a dam is built and where water evaporates from their surface area. While this is not a water withdrawal per se, it should be considered as an anthropogenic consumptive water use, since this evaporation would not take place without the human intervention of building a dam to store freshwater resources for different purposes, such as for withdrawal by one of the above sectors, for generating electricity (hydropower), etc. 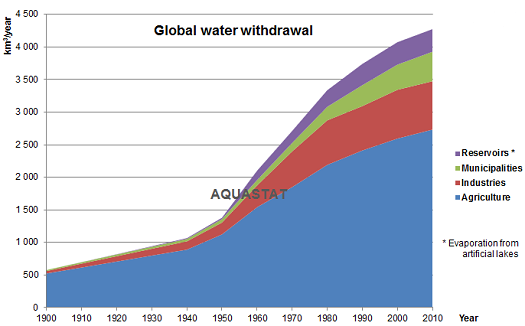 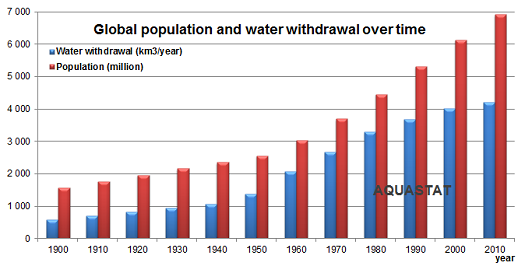 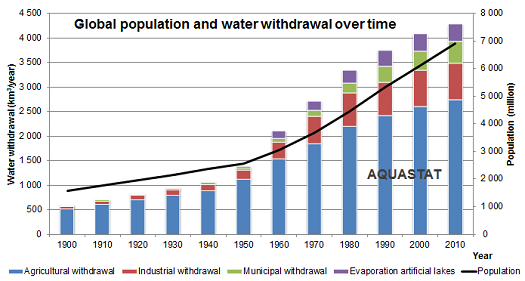 A list of all publications is available on the Publications page. A non-exhaustive selection of some publications more specifically related to water uses is given below: