For acquiring reliable data and information, the importance of cooperating with national resource persons working in the field of water and agriculture, with good networking capabilities and a sense of responsibility, has been shown to be vital since AQUASTAT was created. Experience and lessons learned in global water information management show the importance of national capacities on which the SDG process is drawing.

A network of national correspondents was considered the best answer to increase country ownership over water data, as well as to overcome the previous AQUASTAT challenges (see The previous AQUASTAT methodology section below). The FAO Global Forestry Assessment, indeed, already successfully collects forestry statistics through such network which also supports another SDG indicator under FAO custody (15.2.1). FAO fisheries statistics have also been relying on a similar network for many years.

While data collection is an important function of the correspondent, there is also value in the process itself. In some countries water resources are not inventoried or data are not kept up to date. This limits management options and the ability to respond to major changes in water resources. Having national correspondents and alternates, especially from various agencies, allows a forum for collecting/assembling data that often co-exists in different agencies. Moreover, the official nomination of the AQUASTAT National Correspondents makes the validation step implicit with the data being officially sent.

The annual “Water and Agriculture” questionnaire, cleared by the FAO Office of the Chief Statistician (OCS), compiles the water and irrigation statistics collected by the National Correspondents is sent out the first semester of each year.

The primary scope of the questionnaire is to obtain a comprehensive picture of water resources and uses at the national level, along with the description of their major characteristics, trends, constraints and perspectives, with particular focus on the agricultural sector, through systematic data collection, harmonized definitions and metadata. The questionnaire is also designed to collect on an annual basis a selection of SDG-related data on water resources, water use and irrigation in standardized manner. Reporting burden of the countries was kept in mind throughout the design of this questionnaire, which is purposefully short (35 variables).

The questionnaire is composed of:

The questionnaire is available in three languages: English, French and Spanish.

In addition, to the annual data collection, a more complete questionnaire will be sent every 5 years to populate other AQUASTAT databases.

In parallel and to support the change of data collection methodology, the AQUASTAT team organized workshops for the National Correspondents to develop the national capacities on water monitoring.

Once the questionnaire is compiled by the National Correspondents starts the data validation process, when exchanges between the National Correspondents and the AQUASTAT team clarify the collected data (Figure 1). The critical analysis of the compiled data gives preference to national sources and expert knowledge. Five types of check and validation are first carried out manually by the AQUASTAT team:

After manual verification, the AQUASTAT database management system supports the data validation and processing thanks to almost 200 validation rules. 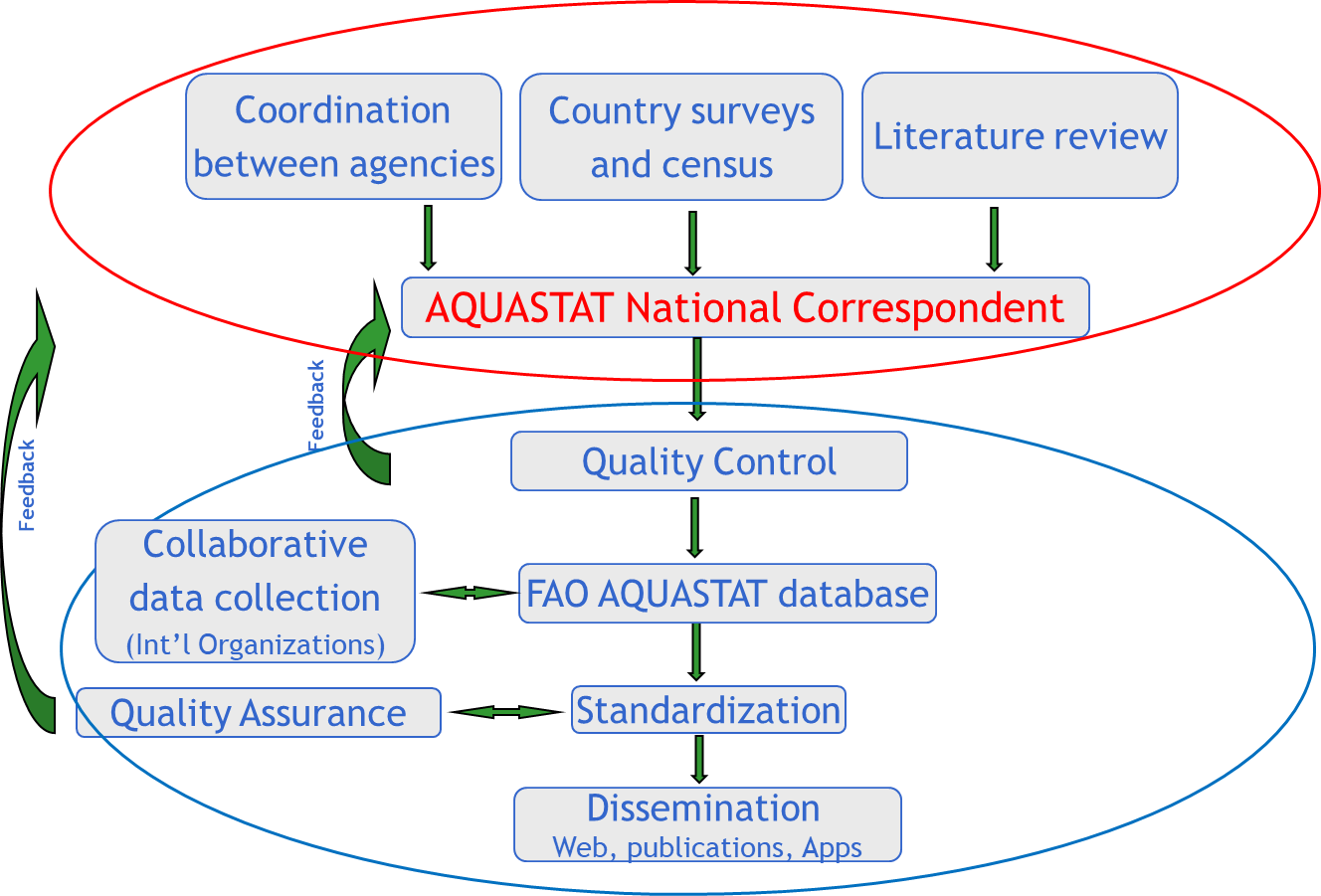 74 countries compiled a questionnaire during the first exercise with National Correspondents held in 2018. This first exercise was successful for the three main objectives the new methodology was attempting to reach in order to overcome the challenges of the previous methodology (see below):

Moreover, the number of countries with updated data within a single year is unprecedented.

Finally, collaborations with other international organizations are also developed to reduce the report burden of the countries. 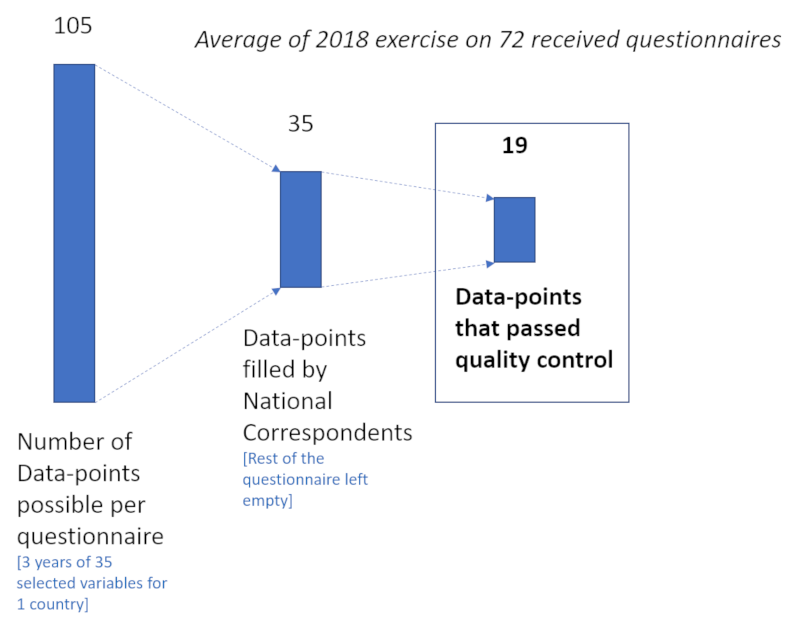 Up to 2014, the data collection process relied mostly with national consultant hired by AQUASTAT, but required still long and heavy validation by the AQUASTAT Team for quality check (Figure 3).

Figure 3 - The AQUASTAT information management process up to 2017 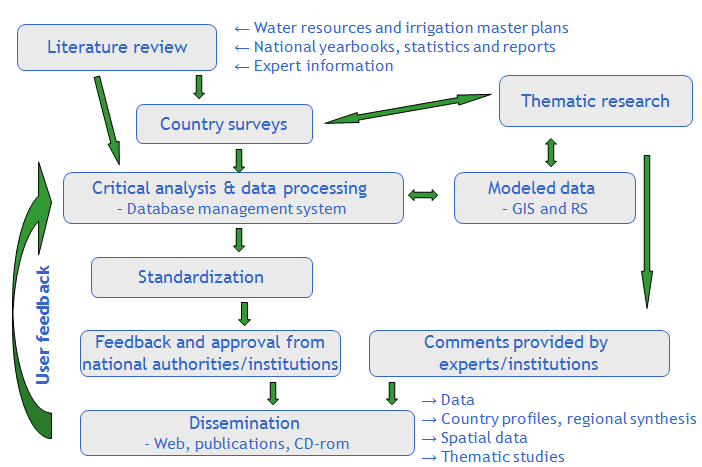 The result of the long process of data collection, analysis and quality control, was that approximately 80-90 percent of the received data did not pass AQUASTAT's first round of quality control. The first manual quality checking included: coherence in the time-series, simple calculations, variables cross-checking, comparisons with neighbouring/similar countries, verification in the original sources. The second automated cross-checking was operated during data upload in the database, using around 300 validation rules.

Data was discarded for a variety of reasons, such as:

Especially situations 3 and 4 occured more frequently, which is symptomatic of two phenomena: an absence of substantial amounts of new water data and pressure to show "new" data no matter what. While it is true that through the use of different technologies in the field (often the example of mobile phones is given), more and more data become available, this is not really yet the case so far for data and statistical information related to water resources and their use. Most likely this is due to the fact that there is a lag between raw data collection, analysis and conclusions.

Due to these challenges, a reflection on the AQUASTAT data collection methodology and country update process started in 2013. The first step was to objectively document for a sample of five countries the timeframe and outcomes of the country update process made with national consultants by comparing the resources involved and the resulting updated data.

Figure 4 below is the outcome of this exercise carried out in 2014. The update process lasted over one year before new data could be published online and only 9 percent of the data points requested in the questionnaire passed the quality check controls and were effectively uploaded in the database. Despite this long and costly update strategy, in some cases almost no new data were accessed. This strategy required too much time under the staffing conditions to maintain the data quality standard, resulting in relatively old data even for the latest updated country—which is the most common criticism reported on AQUASTAT, together with the limited number of data points in a time-series (not a full database).

Figure 4 - Why the AQUASTAT Main Database is "empty" 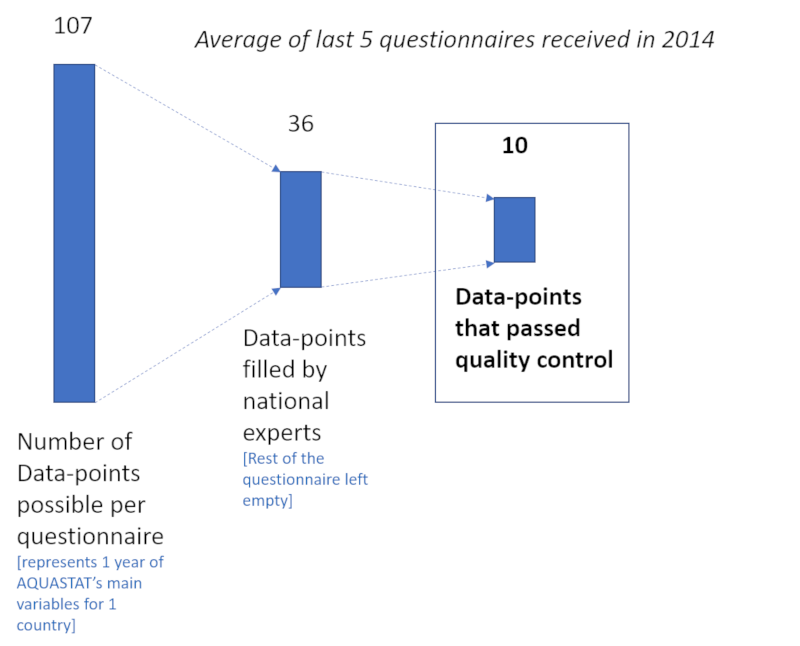 In 2015 and in 2016, a second step in the methodological renewal attempted to update country data through desk studies, using literature and data available online. It limited the cost to time of AQUASTAT team only, and reduced the timeline but lacked then field data country ownerships, even though most of the collected data were from Ministries reports. In addition, a continuous watch of national statistics available online was also performed, although not as systematically as desired due to staffing constraints. This strategy is still considered valid, since it only takes advantage of free available data without adding reporting constraints to the countries. However, this methodology was not fully in line with the then newly adopted Sustainable Development Goals, of which FAO is the custodian agency for 21 indicators and in particular SDG indicator 6.4.1 on water use efficiency and 6.4.2 on water stress, relying heavily on AQUASTAT data. The SDG requires a country-driven process for data collection. The new AQUASTAT data collection methodology presented above below was designed to increase country ownership of water data and the number of data uploaded in the database, as well as to reduce the timeline of the update process.