FAO Director-General to mayors from around the world: "A radical change is needed to address the problem" 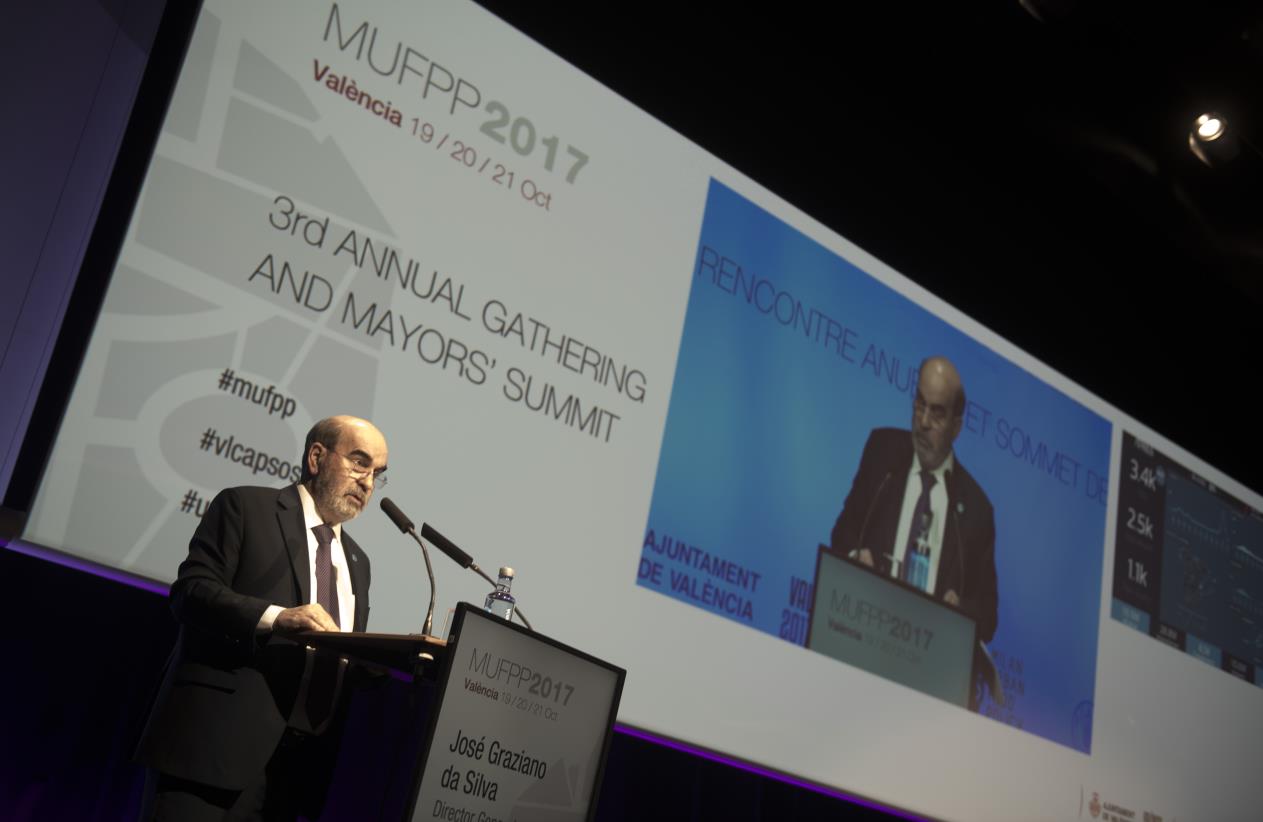 20/10/2017
20 October 2017, Valencia - Cities can and should play a crucial role in the “radical change” needed to address the problem of hunger, malnutrition and food waste, FAO Director-General José Graziano da Silva said today to mayors and representatives of more than 150 cities from around the world gathered in this Spanish city.
"Local actions are critical to achieving the goal of eradicating hunger and malnutrition, guaranteeing more sustainable food systems which are also more resilient to the effects of climate change, and ensuring a healthy and nutritious diet for all," Graziano da Silva stressed when addressing representatives of cities - from Mexico City and Barcelona, to Kyoto and Quito – attending the third mayor’s meeting of the Milan Urban Food Policy Pact, a commitment aimed at combating hunger and food waste and improving nutrition.
This is the third meeting of mayors of cities of the Pact, after the inaugural one held in Milan in 2015 and the one that took place at the FAO headquarters in Rome in 2016. Mayors Joan Ribó of Valencia and Giuseppe Sala of Milan also participated at the opening ceremony.
FAO’s Director-General noted that after steadily declining for over a decade, global hunger has recently risen again, affecting 815 million people – or 11 percent of the world’s population.
The increase of 38 million people from a year earlier is largely due to the proliferation of civil conflicts and climate-related shocks, according to the latest The State of Food Security and Nutrition in the World 2017 report.
At the same time, he pointed out, multiple forms of malnutrition - overweight, obesity or micronutrient deficiencies - threaten the health of millions of people around the world.
"Fortunately cities are taking action and rising up to the challenge," he said. "High levels of creativity can be achieved if partnerships are forged with local actors, civil society, private sector and academic and producer organizations.”
He used his own experience with the Zero Hunger Program in Brazil, which lifted 40 million people from poverty and hunger. "A key component of success was the participation of cities, some as large as Belo Horizonte or Campinas," he said. "Their mayors launched popular restaurants that served balanced and nutritious food at low prices and the cities privileged the purchase of locally produced food, contributing to strengthening the local economy," he explained.
FAO’s support for the Pact implementation
Signatories to the Pact agree to adhere to key principles such as guaranteeing healthy food for all, promoting sustainable food systems, educating the public about healthy eating, and reducing waste.
The Director-General said FAO supports this initiative by helping to develop indicators to measure progress, with a methodological guide "developed in close collaboration with cities around the world to ensure that it is a useful tool,” and acting as a neutral forum for the exchange of successful experiences.
Graziano da Silva called for stronger collaboration, emphasizing that "these initiatives are carried out together with the cities' networks to take advantage of our respective strengths and create synergies." He highlighted FAO's efforts to promote dialogue between parliamentarians and the promotion of mutual learning programs among farmers.
He also referred to South-South and Triangular Cooperation, including FAO’s City to City Cooperation Mechanism, as an "important means to accelerate the pace of change and the transformation of food systems."
Graziano da Silva said FAO supports local governments in their food systems assessments, in the development of urban food strategies and plans, and in the definition of their investment priorities to strengthen linkages with rural areas.
Aligning efforts with the UN’s New Urban Agenda
The FAO chief stressed the importance of fostering collaboration among cities around the world to achieve more sustainable urbanization and to promote economic, political, social and cultural linkages between urban and rural areas.
"We cannot accept the dichotomy between rural and urban areas, which no longer exists," he said.
"We have to adopt a territorial approach based on the integration of the rural with the urban. Only prosperous cities and dynamic rural areas can drive change towards the sustainable food systems we need to fight poverty and hunger,” he added.
To that end, he called for the signatory cities of the Pact to align priorities with the United Nations New Urban Agenda, a road map for more sustainable and human-friendly cities approved in the III UN-Habitat conference on sustainable urbanization held in Quito (Ecuador).
"The New Agenda makes a concrete call for better urban and territorial planning with a view to ending hunger and malnutrition," said Graziano da Silva, adding that it also urges for greater coordination between food and energy policies, and those regarding water, health, transport and waste.