Over a billion tonnes squandered each year 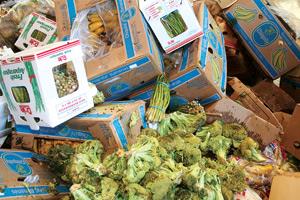 11/05/2011
11 May 2011, Rome - Roughly one third of the food produced in the world for human consumption every year — approximately 1.3 billion tonnes — gets lost or wasted, according to an FAO-commissioned study.

The document, Global Food Losses and Food Waste, was commissioned by FAO from the Swedish Institute for Food and Biotechnology (SIK) for Save Food!, an international congress being held in Düsseldorf 16-17 May at the trade fair of the international packaging industry Interpack2011.

Other key findings include:

The report distinguishes between food loss and food waste. Food losses — occurring at the production, harvest, post-harvest and processing phases — are most important in developing countries, due to poor infrastructure, low levels of technology and low investment in the food production systems.

Food waste is more a problem in industrialized countries, most often caused by both retailers and consumers throwing perfectly edible foodstuffs into the trash. Per capita waste by consumers is between 95-115 kg a year in Europe and North America, while consumers in sub-Saharan Africa and South and Southeast Asia each throw away only 6-11 kg a year.

Food losses during harvest and in storage translate into lost income for small farmers and into higher prices for poor consumers, the report noted. Reducing losses could therefore have an "immediate and significant" impact on their livelihoods and food security.

The report offered a number of practical suggestions on how to reduce losses and waste.

In developing countries the problem is chiefly one of inadequate harvest techniques, poor post-harvest management and logistics, lack of suitable infrastructure, processing and packaging, and lack of marketing information which would allow production to better match demand.

The advice is therefore to strengthen the food supply chain by assisting small farmers to link directly to buyers. The private and public sectors should also invest more in infrastructure, transportation and in processing and packaging.

In middle- and high-income countries food losses and waste stem largely from consumer behaviour but also from lack of communication between different actors in the supply chain.

At retail level, large quantities of food are also wasted due to quality standards that over-emphasize appearance.  Surveys show that consumers are willing to buy  produce not meeting appearance standards as long as it is safe and tastes good. Customers thus have the power to influence quality standards and should do so, the report said.

Selling farm produce closer to consumers, without having to conform to supermarkets' quality standards, is another suggestion. This could be achieved through farmers' markets and farm shops.

Good use for food that would otherwise be thrown away should be found. Commercial and charity organizations could work with retailers to collect, and then sell or use products that have been disposed of but are still good in terms of safety, taste and nutritional value..

Consumers in rich countries are generally encouraged to buy more food than they need. "Buy three, pay two" promotions are one example, while the oversized ready-to-eat meals produced by the food industry are another. Restaurants frequently offer fixed-price buffets that spur customers to heap their plates.

Education in schools and political initiatives are possible starting points to changing consumer attitudes, the report suggested. Rich-country consumers should be taught that throwing food away needlessly is unacceptable.

They should also be made aware that given the limited availability of natural resources it is more effective to reduce food losses than increase food production in order to feed a growing world population.

A separate report on food packaging for developing countries also prepared for the Save Food! congress noted that appropriate packaging is a key factor impacting on losses occurring at almost every stage of the food chain.