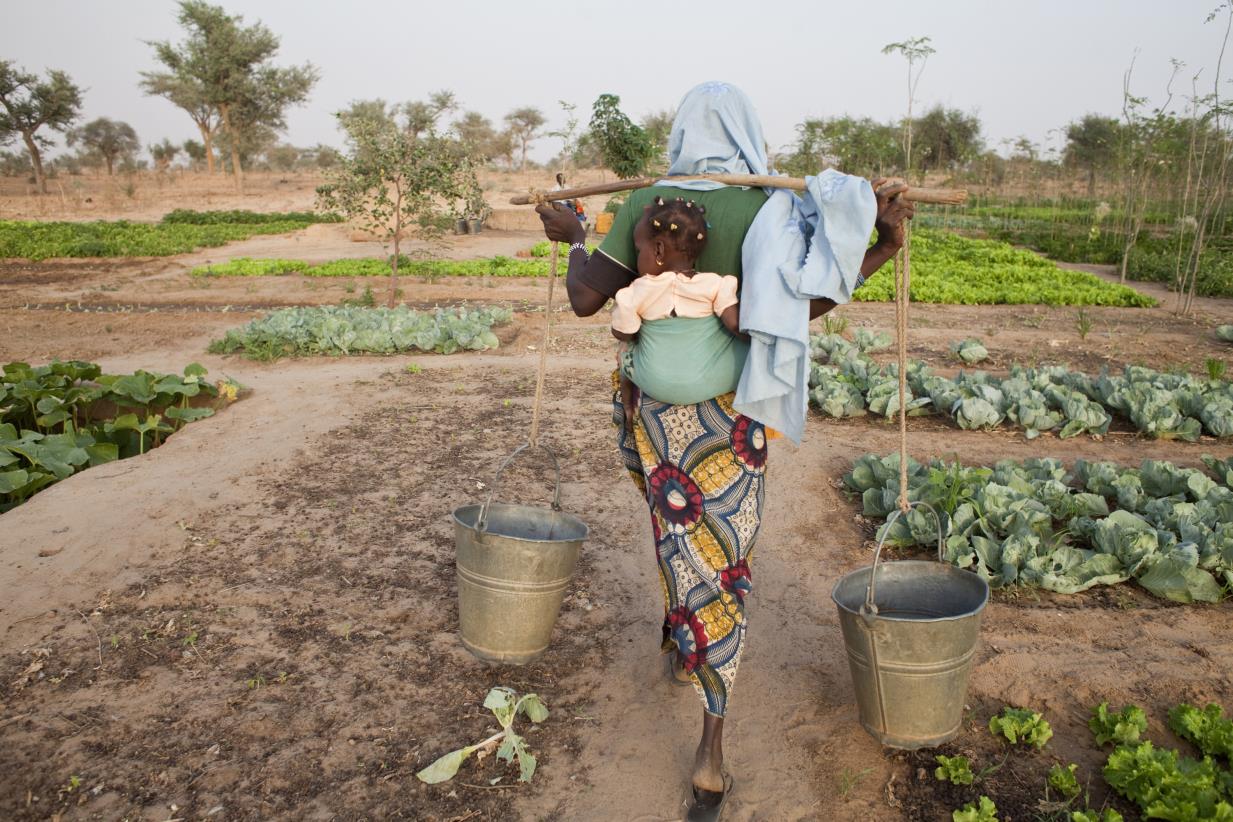 A woman carries water to her crops in Dogondoutchi, Niger.

2 July 2015, Rome  - West Africa has unprecedented opportunities for agricultural growth, but making the most of them will require more effective  regional integration, says a new report by the African Development Bank (AfDB), the Food and Agriculture Organization of the United Nations (FAO) and the Economic Community of West African States (ECOWAS).

To be competitive with large global actors, West African agriculture needs to capture some of the economies of scale that those countries enjoy in the markets for fertilizers and seeds as well as in agricultural research and technology development, adds the report.

While important progress towards regional integration has been made over the past two decades, effective implementation at national level has remained a challenge, as evidenced by roadblocks and trade bans hindering intraregional trade, along with continued use of disparate national standards for seeds and fertilizers despite regionally agreed-upon common protocols.

The report, "Agricultural Growth in West Africa: Market and Policy Drivers" (AGWA), comes at a time of great dynamism in the patterns of food demand in Africa.

West Africa's population, now 300 million, is expected to grow to 490 million by 2030. The subregion is already the most urbanized part of Sub-Saharan Africa, with nearly half the population living in urban centres, and the urban population is projected to continue to grow at a rate of 3.8 percent per year between 2015 and 2030.

Many West African countries have been increasingly relying on food imports to meet their burgeoning urban food markets, reflecting the inability of their domestic food value chains to meet the evolving consumer demand in terms of quality, volumes, prices and consistency of supply.

A growing proportion of the West African population is made up of net food buyers who spend large shares of their incomes on food. The only way to ensure these consumers' access to low-priced food while simultaneously enhancing producers' incomes is through raising productivity and efficiency throughout the agrifood system. Achieving these gains in efficiency and productivity requires a more stable and predictable policy environment, refocussing of public investments on the critical building blocks for sustainable long-term growth, and stepping up implementation capacity.

The report stresses that while increasing agricultural yields is essential, more attention needs to be placed on the downstream segment of the agrifood system: assembly, storage, processing, wholesaling and retail.

For example, domestic food processing companies often prefer to import raw materials such as fruit juice concentrate, wheat and vegetable oil rather than sourcing them domestically or developing substitutes based on local raw materials because local supply chains are too weak and fragmented to provide them reliably.

Appropriate policies will vary by country and market segment, but broad efforts to upgrade small and medium enterprises in food processing should be a policy priority, along with strengthening the linkages between market-oriented family farms and their organizations with agribusiness of all sizes to enhance access to markets, inputs and support services. Special attention should be placed in supporting women entrepreneurs, who play a key role in the agrifood system from farming through retail, and to youth.

As the post-harvest segments of the agrifood system grow ever-more important, addressing the varied demands on the system will require going beyond the traditional mandates of Ministries of Agriculture to focus on interconnections among issues as diverse as research, transport investments, trade policies, and nutrition education.

The report contains in-depth analysis highlighting these interconnections. For example, transport prices for farm produce in West Africa are much higher than in other developing regions, hampering intraregional trade and harming producers and consumers alike. Addressing this situation requires a combination of measures ranging from investments in road infrastructure through improved road governance to reforming trucking regulations to instill greater competition.

Based on a detailed analysis of the drivers and trends shaping the development of West Africa's agrifood system and the system's response so far, the study identifies key implications for policies and agricultural investments. These findings will help inform the deliberations on and new orientations of "ECOWAP-10", ECOWAS' forthcoming update to the current West African agriculture policy, ECOWAP/CAADP.

Improving the mix of public investments in agriculture in the region is as important as increasing their level, the report finds. It encourages governments to shift spending towards public goods such as roads, reliable electricity supply, research and schooling rather than towards subsidizing private goods such as fertilizer and tractors.

The English version of the report can be downloaded here.