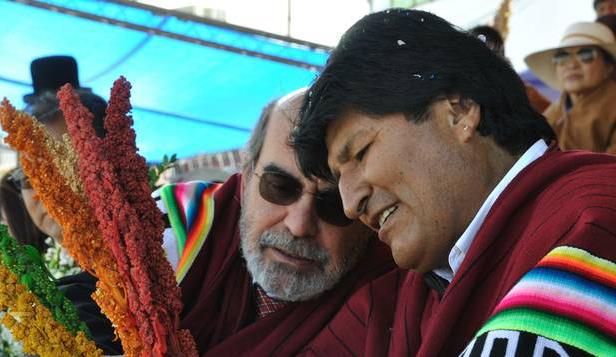 16 December 2013, Santiago de Chile - Increased production and consumption of quinoa, coupled with higher visibility of and greater scientific knowledge about the so-called "Andean super crop" is the legacy left to the world by the International Year of Quinoa 2013, the closing ceremonies of which were held this week in Bolivia and Peru.

"We are happy today - it is a celebration. Our quinoa has been discovered worldwide as an ally in the fight against hunger", said President Evo Morales of Bolivia at a ceremony in Oruro, Bolivia.

Morales, who proposed the year of quinoa to the General Assembly of the United Nations, added: "Currently quinoa is valued as a nutritious food that can save us from the predation and exploitation of natural resources. We have a food that allows us to address poverty and malnutrition in the world."
According to FAO Director-General José Graziano da Silva,  the International Year showed that quinoa has the potential to play a major role in global food security, since it today grows in over seventy countries worldwide.

"Promoting quinoa and our other Andean grains is an important part of the food security and nutrition policy that Peru is working on", said the First Lady of Peru, Nadine Heredia, during a separate closing event in Capachica, Peru.

Graziano da Silva emphasized the crucial support provided both by President Morales and the First Lady of Peru as FAO Special Ambassadors for the International Year of Quinoa: "I wish to pay tribute to the governments of Peru and Bolivia for the vision they have had, as they knew how to recruit the will of the international community to rescue quinoa.”

The Director-General recalled that even more important than the grain itself are the hands of the thousands of small family farmers, indigenous peoples and women who have managed to protect and enhance this agricultural treasure of the Andes for food security.

President Morales highlighted the virtues of quinoa, mentioning for example that consuming 100 grams of the grain-like crop is equal to drinking four glasses of milk. "It also has six times the amount of iron and calcium of corn and 20 times more iron than rice", he said.

Peru's Minister of Agriculture and Irrigation, Milton Von Hesse, said that during the International Year of Quinoa a new variety known as Santa Ana 433 was established which has yields six times greater than traditional quinoa.

Quinoa is a high priority in the work that countries and FAO are undertaking to rescue neglected traditional crops,  whose potential is not being fully exploited.

"Recovering these foods means reassessing cultures and ways of life that can strengthen the food security of millions of people," said FAO's Director-General.

President Morales underlined that a few years ago quinoa was rejected in the cities of Bolivia, as it was considered a food only of the Aymara indians. "Now is sought after throughout the world," he said.

A new look at an ancient crop

Greater production, marketing and consumption of quinoa has been supported by the extensive scientific and cultural review that countries have undertaken, reflected in publications such as The State of the art of Quinoa in the World and the International Quinoa Cookbook: Tradition and Vanguard.

Additional studies conducted over the past year were shared in the First Quinoa World Congress, which brought together academics and specialists from around the globe and allowed further progress in seed improvement. The International Year also spurred the study of crop biodiversity in major quinoa-producing countries (Argentina, Bolivia, Chile, Colombia, Ecuador, Peru ) as well as extensive  reviews of quinoa's main pests and diseases.

Almost all global production of quinoa is in the hands of family farmers. In recognition ofthe contribution of smallholder farms to global food security, the United Nations Assembly declared 2014 as "International Year of Family Farming".

"It was small farmers in the Andes who knew how to preserve and improve quinoa for thousands of years, and it is they -- and millions of family farmers across the planet --  that we will celebrate during 2014," said Graziano da Silva.

According to FAO, more than 80% of farms in Latin America and the Caribbean are family farming andproduce most of the food for domestic consumption the region and generate about 70 percent of agricultural jobs at country level.

In Bolivia, Graziano da Silva invited President Morales to continue his role as Special Ambassador for Quinoa in 2014, an invitation that was also extended to Peru's First Lady Nadine Heredia.

“During the International Year of Family Farming in 2014 we will continue the commitment of this government to work with small farmers, hand in hand with you, with the authorities,  international cooperation and business to strengthen the productive capacities of farmers", said the First Lady of Peru.