“We risk a catastrophe if agriculture collapses in Afghanistan”

Richard Trenchard, the Food and Agriculture Organization’s Representative in Kabul, calls for urgent action to prevent a worsening crisis 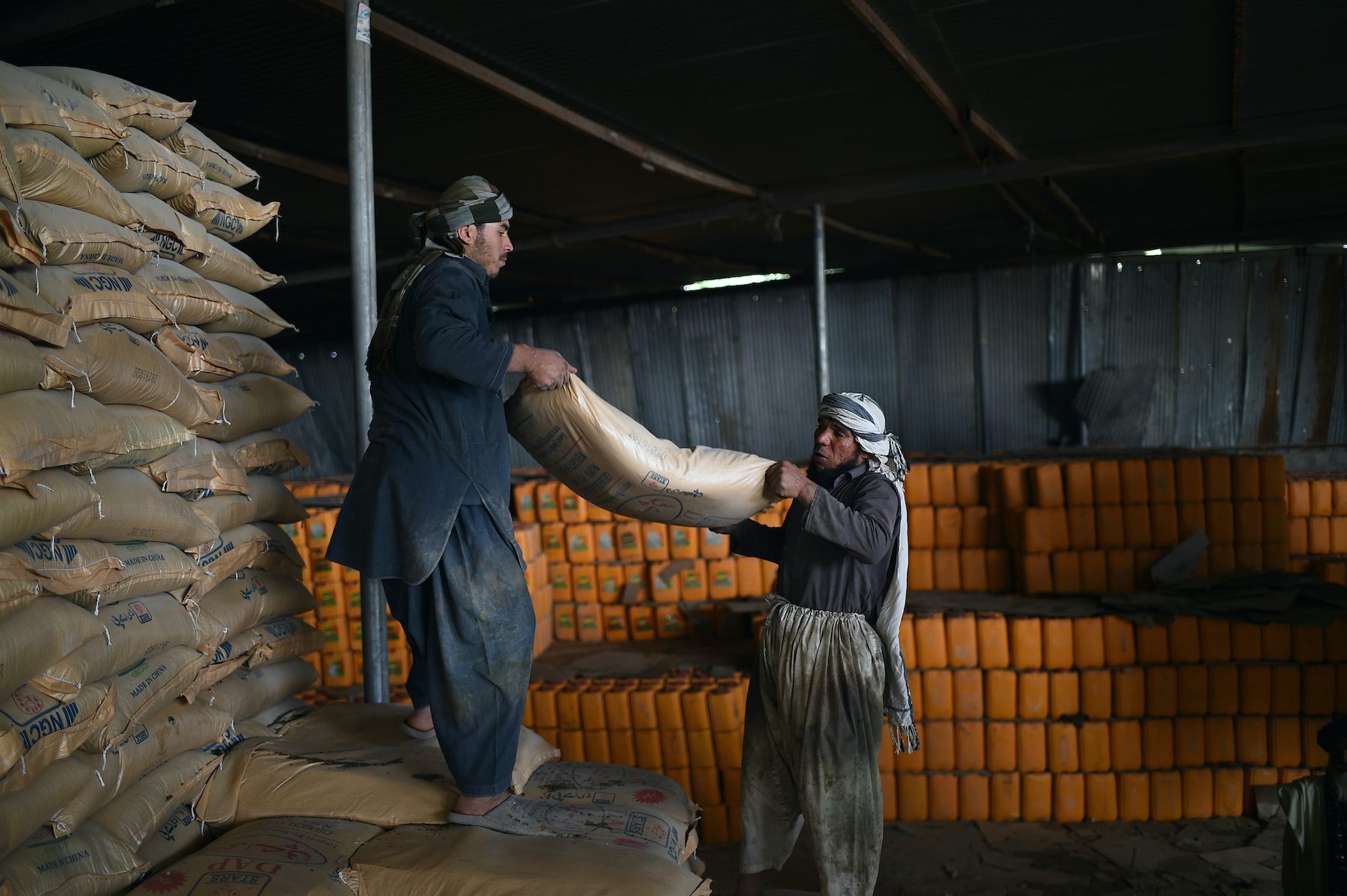 Kabul –  Richard Trenchard, the Food and Agriculture Organization of the United Nations’ Representative in Afghanistan, warns that worsening drought and recent economic upheaval are having a severe impact on the country with nearly 19 million people now facing acute food insecurity. He is calling for urgent international action to prevent a catastrophe.

How serious is the humanitarian situation in Afghanistan?

As every Afghan man, woman and child knows, Afghanistan is experiencing a humanitarian crisis on an unprecedented scale, with unprecedented speed. In Afghanistan today 18.8 million people are facing acute food insecurity. That means they are experiencing hunger on a daily basis, as the projections show. This is a dramatic increase on just six months ago.

Worryingly, we haven't seen the worst of it yet. By the end of the year, that number is expected to rise to 22.8 million people. We must always remember that behind every single number lies a person, whether it's a man, woman or a child, facing acute food insecurity, that is to say, hunger on a daily basis.

Why has the crisis worsened in recent months?

What started off earlier this year, or even late last year, as a drought-driven crisis, has been transformed in the last few months into something far bigger and far more complex, a national crisis fuelled by the economic implosion and the suspension of the international development assistance that has underpinned the provision of basic services, such as primary healthcare, for so many years. Absent safety nets have become even more important as the crisis deepens.

Afghanistan's remarkable farmers, livestock owners and herders have always had a key role in bringing Afghanistan back from the brink of catastrophe. It will be the same this time. Let us remember 70 percent of Afghanistan's people lives in rural areas. Agriculture makes an enormous contribution and accounts for at least 25 percent of the country's GDP and an estimated 80 percent of all livelihoods depend directly or indirectly on agriculture. This is why the impact of the drought is so destructive and agriculture is so critically important.

What can be done to protect critical agriculture and why is this so important?

Agriculture is the backbone of Afghan livelihoods and the country’s economy. Agriculture, including livestock, will play a vital role in bringing Afghanistan back from the brink of catastrophe. When farmers cannot grow crops and livestock owners see their herds die or are forced to sell, their livelihoods will just disappear. They will leave rural areas and have no other choice than to migrate to urban centres and beyond, making the crisis worsen with further decreased domestic production of food and increased needs. This will make it so much harder for them and will make it so much harder for Afghanistan to avert catastrophe.

This is why urgent humanitarian assistance is so important now to support Afghanistan’s farmers and livestock owners and herders. In addition to the incredibly important work that FAO is doing to save lives today, together with the UN World Food Programme and other UN humanitarian partners, we must make sure that humanitarian assistance continues to protect critical agricultural livelihoods across rural areas. Afghanistan’s farmers and livestock owners know this. We know this.

We risk catastrophe if agriculture collapses. Alarmingly, the drought we have seen in Afghanistan since late 2020 is forecast to continue well into next year and it has already had a severe impact in 25 of Afghanistan's 34 provinces.

It's absolutely vital that Afghanistan's rural households, farmers and livestock owners, who account for such a large part of the population, are able to carry on farming and carry on growing food, keeping livestock alive.

FAO is currently distributing wheat seeds in 30 provinces but it is a race against the clock to get these seeds to 1.3 million people this winter. And humanitarian assistance needs will continue to grow. The massive humanitarian response needed in the coming months is focused on saving lives and protecting critical livelihoods. If rural livelihoods collapse, the risk is that the country will too.

If agriculture collapses we'll see ever diminishing food supplies domestically, we’ll see ever diminishing incomes, and we will inevitably see fast accelerating displacement. Let’s remember too that winter is a critical factor both for the snow and the water that it provides, and also for the conditions that people will be facing.

How critical is the weather now for farmers, pastoralists and their families?

The fast-advancing winter - and the continuing drought - is a challenge for farmers, pastoralists and many others across Afghanistan, including the displaced. But it also presents challenges for humanitarian organizations like ours. Many areas of the country will become inaccessible in the coming weeks and months as winter advances and the situation will become far harder for those already caught up in the vortex of crisis.

We are now coming to the end of the winter wheat planting season. This is the foundation for rural livelihoods across vast swathes of Afghanistan. We are distributing wheat cultivation packages, including high quality and locally-supplied seeds, fertilizers and training. This campaign will benefit 1.3 million people and keep their livelihoods going in 30 of the 34 provinces of the country in the coming weeks. It will decrease the need for food assistance, including in hard to reach areas.

What needs to be done to turn the situation around?

Thanks to the generosity of a number of donors, FAO immediately needs $11.4 million until the end of the year, but it is clear our humanitarian needs for next year will be substantially higher than in recent years. With the worsening drought FAO is seeking a further $200 million for 2022.

We also need to see the economic implosion addressed. There is a massive liquidity crisis, near paralysis of the banking system and major impact on business and domestic trade as well. It is not only driving the crisis, it also affects the humanitarian response.

Finally, we need to find ways of unlocking the large amounts of international development which has been so important in the last few years for providing basic services in agriculture, health and education and across all sectors. We need to see that unlocked in the coming months and into next year.

Is the Taliban stopping assistance from getting to those in need?

There is not a single person in Afghanistan that does not recognize the need for massive humanitarian assistance in the coming weeks and months, particularly as winter approaches.

Many humanitarian organizations, including FAO, have been working in Taliban areas for years. The need for operational independence, needs-based assistance and the core humanitarian principles of neutrality, impartiality, independence and humanity are well established, understood and respected, here as they are in every other country where humanitarian work is ongoing.

For many years, including earlier this year, physical access, due to insecurity, was a major constraint in many areas. Conflict and other access challenges stopped us reaching many people in need of humanitarian assistance. However, access has improved enormously in recent months. We can access all Afghan provinces and in most districts in these provinces. That wasn’t the case a few months ago. But the challenges of access have now been replaced by the challenges driven by the economic implosion.

Along with the continuing drought, it is the economic implosion that has driven the dramatic worsening of the crisis in the last few months and fuelled its increasingly urban character. The economic situation has also made our humanitarian response much harder. But not impossible.

Like all humanitarian partners, we have continued to work flat-out to find solutions to these new challenges and have continued to deliver vital humanitarian assistance as the crisis has evolved. FAO reached almost 350 000 people between August and October and in November alone we are looking to reach over a million farmers, with urgent humanitarian assistance to protect critical livelihoods. We are now distributing enormous quantities of wheat seeds, livestock feed concentrate and other vital inputs. But so much more is needed.