Catastrophic hunger levels recorded for the first time in Haiti

Almost half the population are currently facing acute hunger 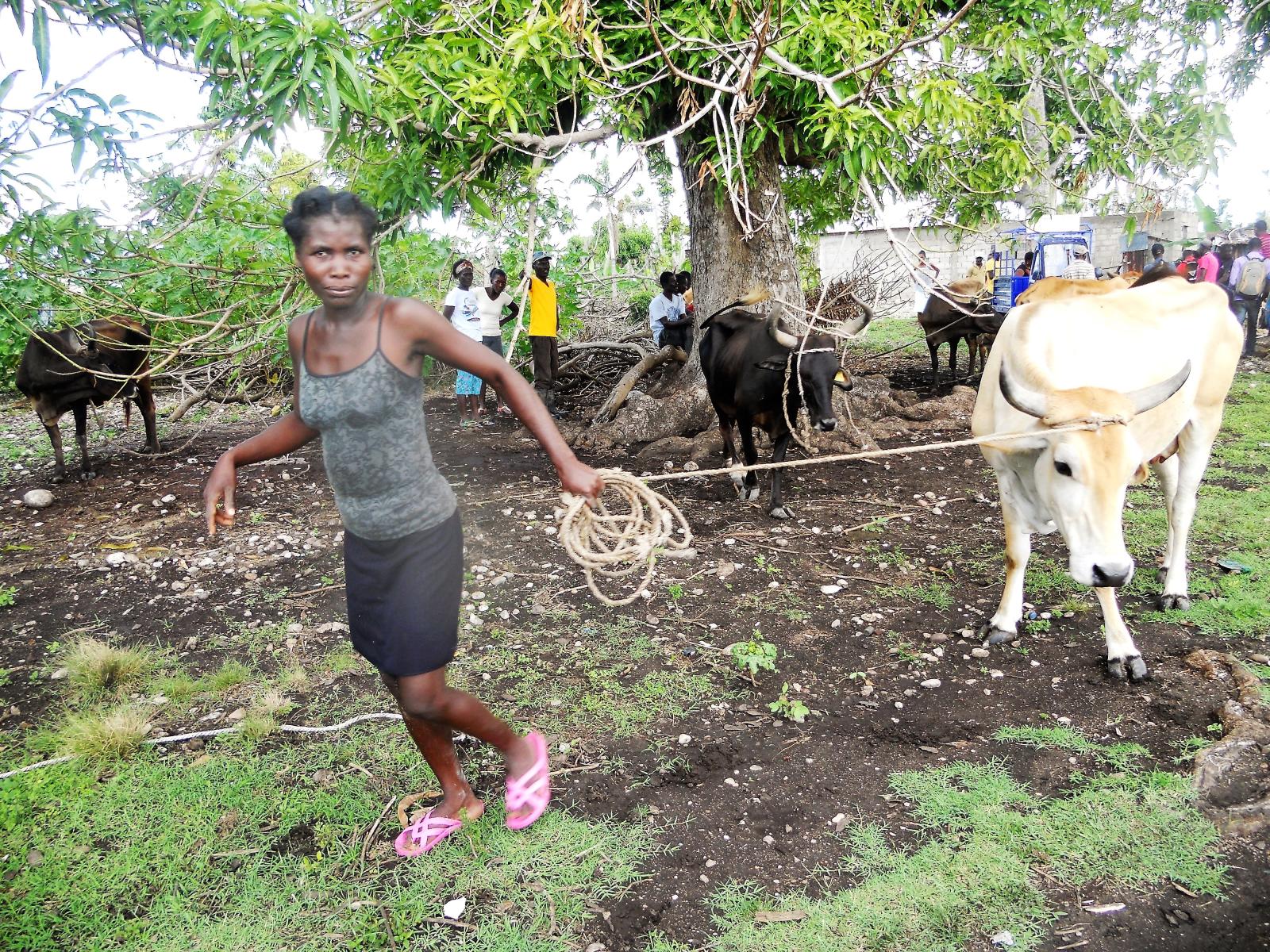 A herder attends a mobile veterinary clinic in Haiti.

Port-Au-Prince - An unrelenting series of crises has trapped vulnerable Haitians in a cycle of growing desperation, without access to food, fuel, markets, jobs and public services, bringing the country to a standstill, warn the Food and Agriculture Organization of the United Nations (FAO) and the United Nations World Food Programme (WFP). Hunger has reached Catastrophic levels, or the highest level, 5 on the Integrated Food Security Phase Classification (IPC), in Cité Soleil, an urban neighborhood in Port-au-Price, Haiti.

Cité Soleil has seen a worrisome rise in food insecurity over three years. Currently, 65 percent of its population, especially the poorest and most vulnerable, are in high levels of food insecurity with 5 percent of them in urgent need of humanitarian assistance. Increased violence in Cité Soleil, with armed groups vying for control of the area has meant that residents have lost access to their work, markets and health and nutrition services. Many have been forced to flee or hide in their homes.

Food security has also continued to deteriorate in rural areas, with several going from Crisis (IPC 3) to Emergency phase (IPC 4). Harvest losses due to below average rainfall and the 2021 earthquake that devastated parts of the Grand´Anse, Nippes and Sud departments are among the shocks that worsened conditions.

“WFP stands with the people of Haiti - serving the vulnerable and helping the poorest. We are here to ensure schoolchildren get a nutritious meal each day, families meet their basic food needs and communities are empowered,” said Jean-Martin Bauer, WFP Country Director in Haiti. “This is a time of tumult in Haiti. But there is a way forward. We all need to be steadfast and focus on delivering urgent humanitarian assistance and supporting long-term development.”

“We need to help Haitians produce better, more nutritious food to safeguard their livelihoods and their futures, especially in the context of a worsening food crisis,” said José Luis Fernández Filgueiras, FAO Representative in Haiti. “Resource mobilization efforts must be scaled up in order to strengthen the resilience of households targeted by emergency food assistance to increase their self-reliance.”

For years, natural hazards and political turmoil have taken a toll on Haitians who were already in need in both rural and urban areas. The onset of the global food crisis, with rising food and fuel prices, has led to growing civil unrest that has plunged Haiti into chaos, completely paralyzing economic activities and transport.

The basic food basket is out of reach for many Haitians. Inflation stands at a staggering 33 percent and the cost of petrol has doubled. The situation is being further exacerbated by a recent cholera outbreak and the lack of portable water which is likely to push more people to the brink of survival.

Despite the volatile security situation in Port-au-Prince, WFP provided more than 100,000 people with emergency assistance in the metropolitan area in 2022. WFP’s focus remains on strengthening national social protection and food systems that are central to the country’s recovery efforts and long-term development. Income generation activities like linking smallholder farmers to local markets, community-level disaster risk reduction solutions and WFP’s school feeding programme work towards empowering communities. In 2021, WFP reached 1.3 million people and in 2022 plans to reach 1.7 million Haitians. Over the next six months, WFP requires $105 million for crisis response and to tackle root causes and bolster the resilience of Haitian.

FAO has been providing emergency livelihoods support to small-scale vulnerable farming households. During the autumn agricultural season starting this month, FAO aims to reach close to 70,000 people with cash for work, food crop production assistance, goat and poultry breeding assistance, and food storage and processing support for school feeding programmes. FAO urgently requires some $33 million to assist more than 470,000 of the most vulnerable people. FAO aims to scale up operations in Haiti from 560,000 people targeted in 2022 to 876,000 people in 2023, corresponding to people in IPC phase 3 (Crisis) and 4 (Emergency) in rural areas of the great South of the country.

While the agencies continue operating in Haiti as the security situation allows, increased insecurity, violence and lack of fuel are hampering humanitarian operations which are critical for the most vulnerable Haitians. The United Nations and its partners recall the importance of respecting the humanitarian principles of humanity, neutrality, impartiality and independence to ensure support reaches Haitians.

Note to the editor:

The latest IPC results (October 2022-February 2023) are detailed below: