G20 Green Garden: Planting for the future in Ancient Rome 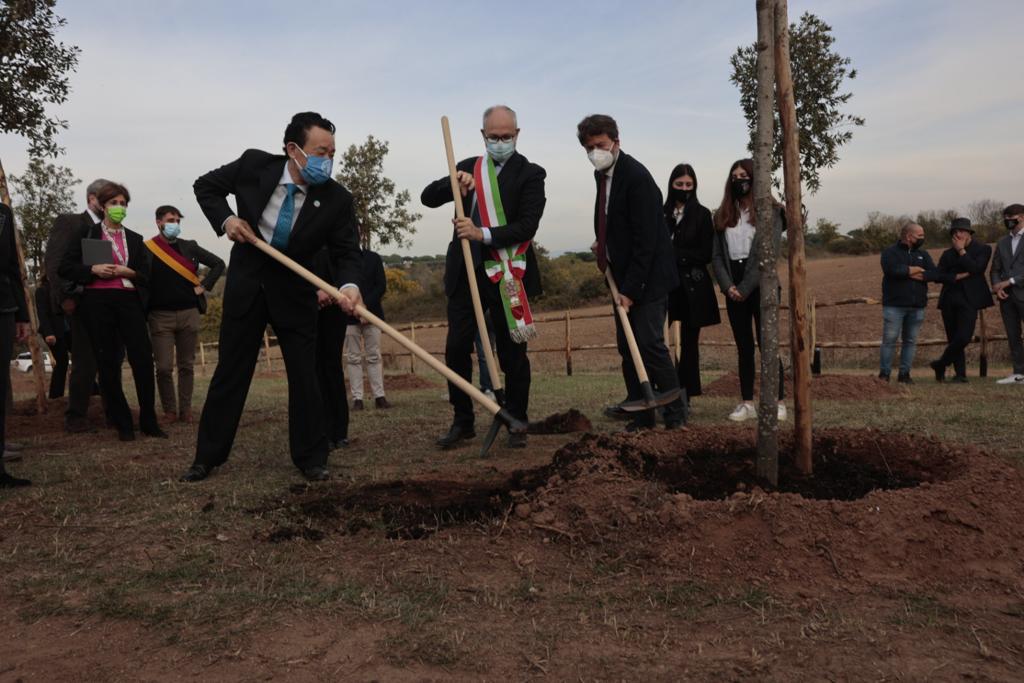 Rome - The Director-General of the Food and Agriculture Organization on the United Nations (FAO), QU Dongyu, and the Italian Minister for Culture, Dario Franceschini, participated today in a tree planting ceremony at the G20 Green Garden in Rome.

The G20 Green Garden in Rome’s famous Appia Antica Park is a multi-partner initiative launched in June 2021 amid the Italian current Presidency of the G20. This open-air museum celebrates biodiversity, nature and the city’s ancient heritage while calling for global solidarity to create a sustainable future for ‘People, Planet, Prosperity.’

The planting ceremony took place in the park’s Sacred Wood ahead of the G20 Heads of State and Government Summit in Rome. The Mayor of Rome, Roberto Gualtieri and Ambassador Giorgio Marrapodi, Director-General for Development Cooperation of the Italian Ministry of Foreign Affairs, joined the FAO Director-General and the Minister of Culture. Alma Rossi, Director of the Appia Antica Regional Park, also attended the event.

We are planting “seeds for the future,” said the FAO Director-General stressing that the trees “will remind future generations of the commitments made to help shape a better future for them.”

Noting how the ancient Romans were aware of the importance of trees, Qu invited all to take inspiration from the Lex Spoletina, the earliest example of forest law, dating back to the 3rd century BC - the park features an information panel on this ancient piece of legislation.

Addressing students of the Agricultural Institute in Rome, also attending the celebration, Qu called the youth “change-makers of the future” and underscored the importance of starting early to learn from nature, reconnect with it, respect it, and live in harmony with it.

Minister Fransceschini said: The Appia Antica Park represents a peculiar and precious synthesis of history, culture, art and sustainability. Allowing the new generations to experience these places, with these teachings, is the best way to shape the citizens of tomorrow and make them more aware of the fact that there can be no prosperity without sustainability.

The trees planted in the Sacred Wood were donated by the Lazio Region as part of the Ossigeno (Oxygen) project, an initiative aiming to fight climate change, curb carbon dioxide (CO2) emissions and protect biodiversity. The project aims to promote the planting of six million trees across the region.

Mayor Gualtieri said: "I am happy that the planting of these trees takes place within the Oxygen project. It is a manifesto of an idea of sustainable development focused on the valorization of a great green avenue, that, over the years, has been cultivated and protected by enlightened citizens who have who have always cultivated a high vision of the city."

The tree planting ceremony is the last of a series of events that took place at the G20 Green Garden in 2021, including the launch of an educational itinerary and the Garden’s joining the Rome’s Open House Day, introducing members of the public to the concept of “People, Planet and Prosperity”, and to the Sustainable Development Goals (SDGs).