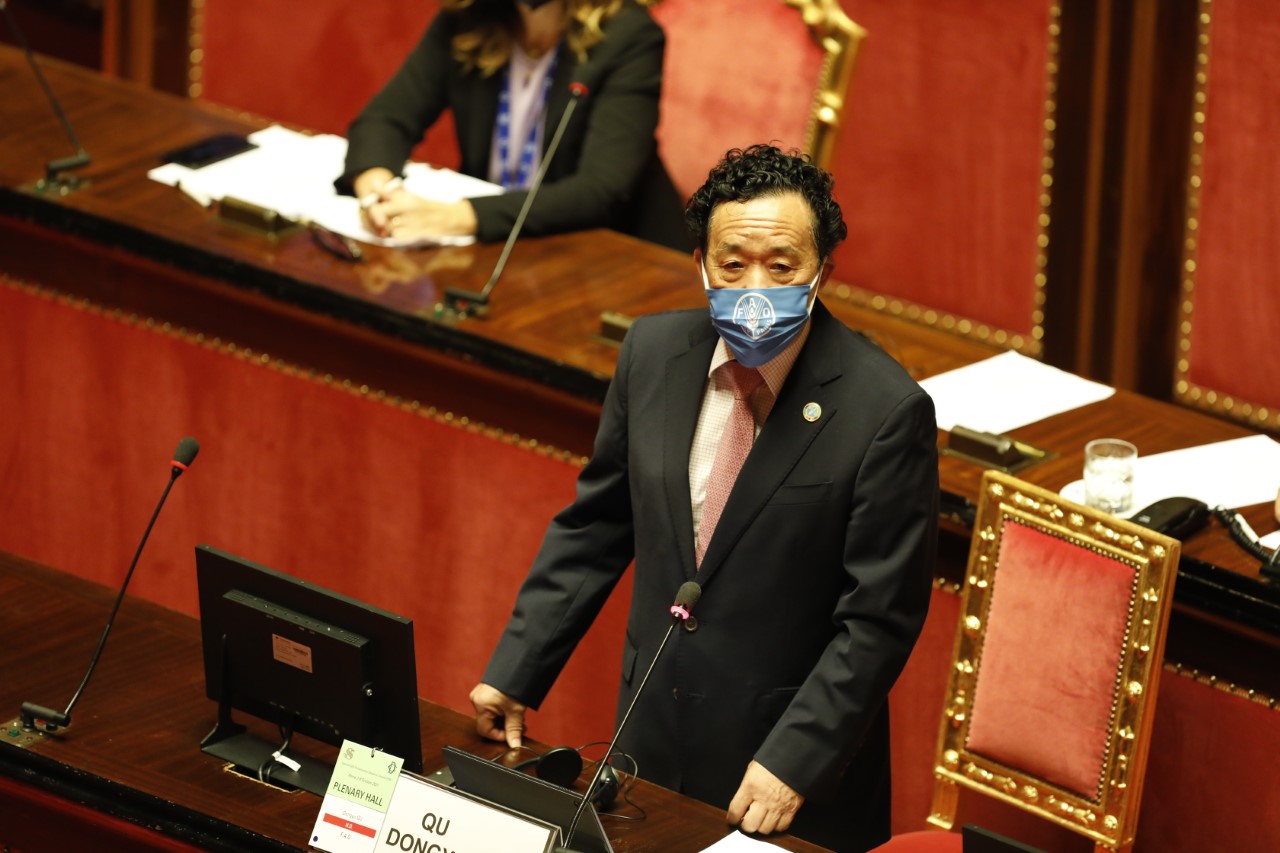 Rome - Politicians from the G20 countries have a key role in tackling global challenges such as worsening hunger and the climate crisis, and the Food and Agriculture Organization of the United Nations (FAO) seeks deeper cooperation with them to accelerate progress, Director-General QU Dongyu said today.

“This meeting is possibly one of the most critical gatherings held under the Italian G20 Presidency. It brings together the officials that can develop policies and legal instruments to address the pressing challenges that we face together, globally,” Qu told a meeting of parliamentary presidents from the G20 nations focused on Food Security and Resilience in the face of COVID-19

“FAO recognizes that Parliamentarians are strategic partners as they provide the legal frameworks, approve public budget allocations and ensure government accountability on international commitments,” he added.

Under Italy’s Presidency, the G20 has renewed and strengthened its political commitment to global food security and improved nutrition. In June, a first-ever joint meeting of Foreign Affairs and Development Ministers was convened and the Matera Declaration was adopted.

The declaration, named after the southern Italian town in which it was signed, also boosted the Food Coalition in response to the COVID-19 pandemic. The Food Coalition, conceived by the Italian Government and led by FAO, is working to leverage high-level political, financial and technical expertise supporting countries’ needs.

In the meeting with the parliamentarians, Qu highlighted the potential for collaboration with both the Food Coalition and also FAO’s flagship match-making Hand-in-Hand Initiative, which aims to accelerate agricultural transformation and sustainable rural development to eradicate poverty and end hunger.

The Food Coalition and the Hand-in-Hand initiative are both uniquely positioned to achieve the agri-food systems transformation the world needs, the FAO Director-General said in a session also addressed via video by UN Deputy Secretary General, Amina J. Mohammed.

Even before the pandemic, the world was off track to end global hunger and malnutrition in all its forms by 2030, with 811 million people in the world facing hunger last year. Efforts to meet the Paris Agreement’s goal to limit global warming to well below 2, preferably to 1.5 degrees Celsius, compared to pre-industrial levels, were also off track.

“Agri-food systems are both a victim of and a contributor to the climate crisis, and therefore must be part of the solution,” Qu said.

FAO has been supporting the role of parliamentarians in the fight against hunger and malnutrition for many years and has helped to create Parliamentary alliances in every region of the world, including in the European Parliament. These alliances have already passed more than 35 laws on school feeding, family farming, climate change, small scale fisheries, food loss and waste and many other relevant topics.

Technical support from FAO to more than 45 parliamentary alliances against hunger all over the world was crucial during the pandemic. It contributed, for example, to the passing of several laws to mitigate the impact of restrictions on trade and movement on smallholders.

“Your policy choices guide and influence non-G20 countries,” Qu added, noting that the meeting was an important venue for policy dialogue and the conception of novel initiatives and mechanisms.

Qu reaffirmed the commitment of FAO to continue supporting national and regional parliaments in their efforts to promote food security through national legislation.

Facilitating access to technical knowledge and data and promoting the exchange of good practices, experiences, and approaches, FAO stands ready to cooperate to achieve MORE efficient, inclusive, resilient and sustainable agri-food systems for better production, better nutrition, a better environment, and a better life – leaving no one behind, Qu said.