Methane is a short-lived climate pollutant. While other greenhouse gases such as carbon dioxide have an atmospheric lifespan of thousands of years, methane remains in the atmosphere for about 12 years. However, despite its relatively short life cycle, methane’s potential to warm the atmosphere is high. Over a 20-year period after it is released into the air, methane’s warm potential is more than 80 times greater than carbon dioxide’s.

Methane mitigation is one of the most promising ways of limiting climate change. Thanks to methane’s short atmospheric lifetime, lower methane concentrations would rapidly reduce the global temperature increase. Cutting methane emissions would help reduce the rate of warming in the near term and if emissions reductions are sustained, this can also help limit peak warming. 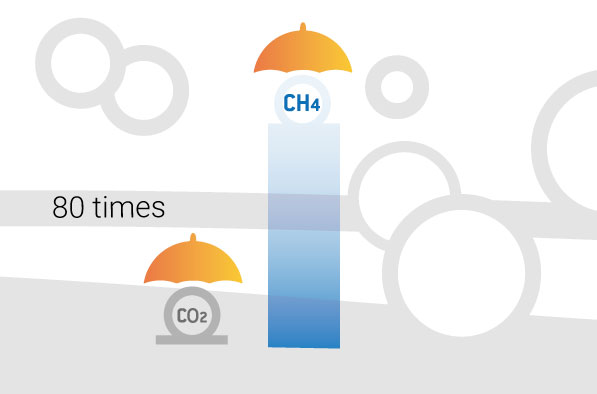 Over a 20-year period, methane warms the planet 80 times more than carbon dioxide

Agriculture is the first source of methane emissions, accounting for about 40 percent globally