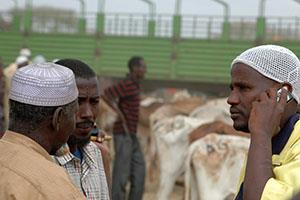 Traders at the livestock market in Garissa, Kenya

Mobile phone applications are making ‘early warning’ a matter of seconds instead of weeks for animal disease outbreaks, and essential veterinary care can be tracked with pinpoint accuracy and speed, thanks to the Global Positioning System function now directly integrated in most cell phones.

In Kenya, for example, where three out of four people now have a mobile phone, FAO has partnered with the Royal Veterinary College and local NGO Vetaid, to  support the pilot testing of a mobile phone application developed by researchers at the Imperial College London’s School of Public Health. The application, called EpiCollect, helps to track animal vaccination and treatment campaigns. The application and storage space are provided for free on the EpiCollect website, which assigns a unique location for each project. That location is known only to the users – such as national veterinary officials and field vets – involved in the project. The EpiCollect database is not searchable, so prying eyes won’t find potentially sensitive information.

“Cellular phones eliminate delays in receiving field data, since all the information is relayed via the mobile network,” said Allport. In addition, the information is assigned a geographic location, so locations are extremely accurate and available in real-time.

Until only some five years ago, veterinarians would have to travel to remote locations, record data, and then travel back to district-level offices to process the paperwork. Now, the information can be transmitted in real time. The data – for example on the total number of livestock in a herd and the number of animals vaccinated – is stored and then relayed to the project location on a project-specific website. As herds move from one location to another, for example for fresh pasture, their movements can be regularly followed and updated.

At present, EpiCollect is only being used by field veterinarians with phones provided by Google Kenya for the testing phase, as the tools are honed and glitches ironed out according to feedback coming from users. Eventually, the tools could be made available to village elders and well-established networks of community animal health workers, as more and more Kenyans upgrade to Internet-enabled phones and prices for the technology inevitably come down. Although only a third of Kenyans have access to the Internet at present, 99 percent of those Internet subscriptions are for access from a mobile phone.

FAO also has a Global Animal Disease Information System, known as EMPRES-i, which can house and display data on disease outbreaks gathered from the field once outbreaks are confirmed. FAO has developed the EMPRES-i Event Mobile Application (EMA), which will feed reports on animal disease outbreaks into the database. The technology, available for phones with Blackberry and Android operating sytems, is scheduled to be field tested by Ugandan veterinary services in the first half of 2013 as a first pilot supported by the government of Ireland. EMA is also being developed for iPhones.

Without delays, animal diseases can be quickly detected and isolated when alerts come in digitally. Early warning can prevent the death of tens of thousands of animals, thus safeguarding livelihoods and food security, and preventing diseases that can sometimes be passed to humans.

“The FAO EMPRES-i system is truly a global public good, and our reporting and response times are being constantly improved, now thanks to incredible technology,” said Juan Lubroth, the FAO’s Chief Veterinary Officer. “Prevention, preparedness and early response are powerful concepts that when translated into tools can be effectively used against infectious diseases, thereby safeguard people’s livelihoods, fend off hunger and, in some cases, human illness,” he added.

In addition, FAO’s Regional Emergency Office for East and Central Africa, partnered with Oxfam, is using Nokia Data Gathering (NDG) to monitor water points in pastoralist areas as an early warning indicator for drought in Kenya and Ethiopia. Communities  monitor water levels regularly via Internet-enabled phones. In the Karamoja area of neighbouring Uganda, the same NDG system is being used by local chiefs to monitor drought indicators to allow for early response, in partnership with ACTED.

FAO is also assessing how mobile technologies can be used to better link livestock producers with markets and livestock traders.

“Traders won’t travel to a remote area to purchase animals unless they have a guarantee that they will be able to buy a minimum number of animals. Otherwise, the expense of making the trip isn’t worthwhile,” FAO Kenya’s Allport said. “But if sellers at market can relay information to a central point about how many animals they have, where and at what price, then the market functions more efficiently and pricing becomes more transparent. They can also collectively bargain for better prices.”

Digital pens for writing in the field

In a number of countries in Africa, Kenya included, a new-fangled version of the old fashioned pen and paper is giving added appeal to digital data gathering in the countryside. Not only is the information relayed in seconds to a central server for analysis, but also the pens enable veterinarians to write the same way they always have done, chatting with farmers without the ‘interference’ that modern mobile technologies can create.

“One of the most important aspects of a veterinarian’s work is building up a good relationship and trust with farmers and people,” explained Phillip Fong, FAO’s Regional Data and Information Officer based in Nairobi, who had earlier introduced digital pens to Southern Africa, where they have proven a success.

Field workers and veterinarians cannot take endless minutes punching in information on a phone, trying to find the small keys on a touch screen that might be impossible to see in the bright sunlight.

A digital pen, however, has a miniature infrared camera that records writing as the pen passes over paper, sends the data wirelessly using Bluetooth technology to a cell phone and then onward to a central server for analysis.

The knock-on benefits of mobile technology appear as limitless as human imagination.

EpiCollect is funded by the Wellcome Trust, a UK-based charitable foundation