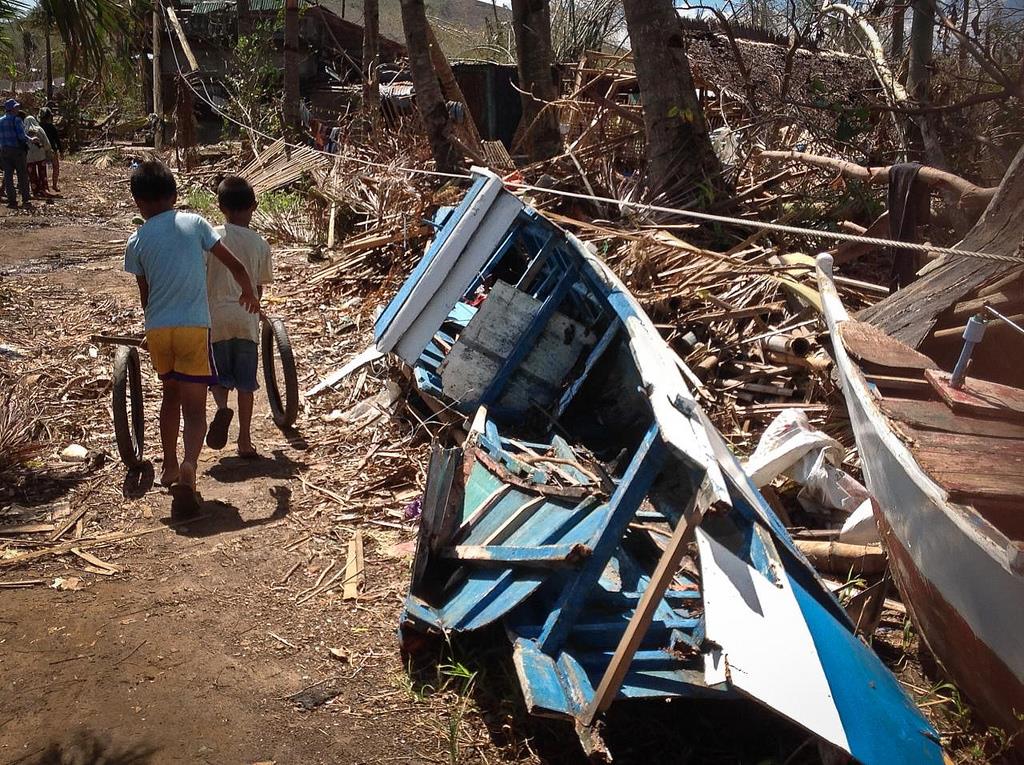 A fishing boat destroyed by the typhoon on Panay Island, Western Visayas.

“Even though we still only have a partial picture, it is clear that the damage caused to the fisheries sector is immense and spans the entire value chain, from catch to market,” said Rodrigue Vinet, acting FAO Representative in the Philippines. “In the context of livelihoods, these losses are crippling.”

According to preliminary assessments by the Philippines’ Department of Agriculture, small-scale fishers were the worst affected when the typhoon tore through the country in November, destroying or damaging tens of thousands of small boats and fishing gear in its path, while larger commercial boats suffered less damage.

Economic losses to the sector are still being quantified, but the worst-hit regions – Eastern, Central and Western Visayas and Mimaropa – are major producers in both aquaculture and fisheries, according to the Philippines Bureau of Fisheries and Aquatic Resources.

In 2011, marine and inland fisheries in these affected regions supplied 21 percent, or 514 492 tonnes, of the total output from the Philippines’ municipal and commercial fisheries combined. Municipal marine fishing is carried out from the shoreline to 15 km offshore, and only boats below three tonnes are authorized to fish in these waters.

Aquaculture, including seaweed, from the four regions is responsible for 33 percent of total national aquaculture production.

FAO cautioned that coordination is crucial in rebuilding the sector so as not to jeopardize the lives and livelihoods of fishers and fish farmers, as well as people directly and indirectly dependent on the fishing sector.

“The Philippines Government has made important efforts to support small-scale fisheries, and we need to ensure that the response to this disaster does not reverse that good work,” Vinet said.

“Experience from the 2004 Indian Ocean Tsunami and other large-scale disasters has shown that inadvertent oversupply of fishing boats and equipment during the recovery can deplete fish stocks, reduce catches, harm ecosystems and damage the livelihoods of the remaining fishers,” he said.

“Boats need to be rebuilt and replaced, but this needs to be done in a coordinated manner to ensure that existing fishing capacity is not exceeded. We need to make sure that in time there are not more boats than fish.”

Vinet underscored that replacement fishing gear should be legal and non-destructive and that boats should be built and repaired with quality materials, taking no short-cuts. “The safety of fishers is a top priority,” he said.

FAO is currently working with the Philippines Government to prepare a recovery and reconstruction plan that includes short- and medium- to long-term recovery for all agriculture subsectors, including fisheries.

The Organization is calling for an initial $5 million to restore the livelihoods of fishers and coastal communities affected by Typhoon Haiyan.

In addition to repairing boats and selective fishing gear, short-term rehabilitation efforts must include providing processing tools for women, demarcating community-managed fish sanctuaries and promoting cash-for-work programmes to assist in the clean-up efforts.

Rehabilitation of lost mangroves will also be important as they act as buffer zones against storm surges and as a refuge and habitat for spawning of many species.

In addition, FAO plans to support the recovery of seaweed farmers, usually women, whose work can bring returns within 60 days, ensuring access to vital income following the typhoon.

The Organization stressed that any fisheries and aquaculture response effort in the Philippines must follow sustainable and good management practice, and that coastal management and zoning must also be respected.