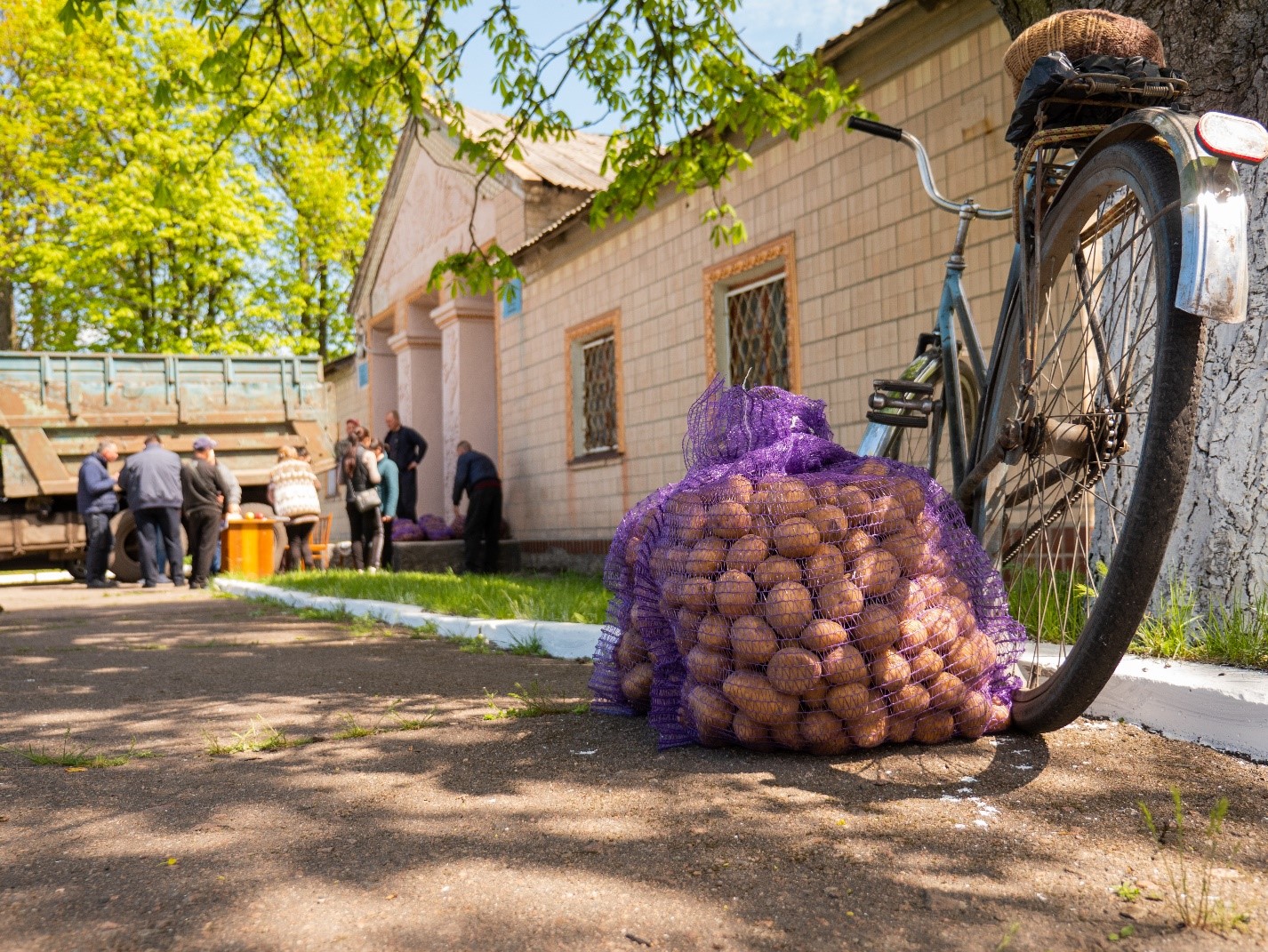 Kyiv/Rome – Working to safeguard the food security and livelihoods of vulnerable rural families in Ukraine, the Food and Agriculture Organization of the United Nations (FAO) has distributed seed potato kits to 17 740 households from across ten of the country’s oblasts so they can plant food in time for the next harvesting season.

Some 46 000 people stand to benefit from the campaign which receives financial support from the European Union (EU) and the Central Emergency Response (CERF).

“It's absolutely crucial right now to help farmers. The big ones but also the small ones, and those families involved in backyard farming,” said Pierre Vauthier, FAO Ukraine Designated Responsible Officer. “Agriculture is one of Ukraine’s major sectors and is important for the country’s food security. It is also a key source of income for the 12.6 million people who live in rural areas, who make up almost a third of the country’s population.”

In total, 862 tonnes of seed potatoes have been delivered to those in need over the last weeks. Distribution was achieved in time for the spring potato sowing campaign to ensure that this nutritious food source can be harvested in September.

Each family or household - consisting on average of 2.6 people - receives a kit with 50 kilograms of seed potatoes with an expected yield of about 600 kilograms of potatoes. These may be stored for many months for later consumption, used for the following planting seasons or sold to local markets.

At each location, FAO has been working closely with local authorities and implementing partners, who assisted in the selection of beneficiaries, distribution, monitoring and engagement with communities.

“Thanks to our cooperation with FAO, we have delivered 2.5 tonnes of potatoes to the Rudkivska Amalgamated Territorial Community in Lvivska oblast. This is for 50 households who host internally displaced persons,” said Ihor Vuitsyk, Head of the Board of Lviv Agrarian Chamber, FAO’s implementing partner. “It is important that an organization like FAO really helps people, and today it especially helps those who are engaged in production because one of the FAO's tasks is to ensure local food production”.

Some 15 tonnes of seed potatoes have been delivered to 300 households in Lvivska oblast, west of Ukraine. Out of this, 30 kits have been distributed to the families in the village of Khlopchytsi in Rudkivska Amalgamated Territorial Community. This village is now hosting over 150 internally displaced people from other regions of Ukraine.

Another oblast targeted by the seed potato distribution campaign is Dnipropetrovska in central and eastern Ukraine where 3 690 households have received the kits. Some of these were delivered to 41 villages in Verkhniodniprovska Amalgamated Territorial Community whose residents are hosting 2 685 internally displaced people.

"Some companies closed, reduced staff or fired people. We cannot provide work to the local population. And we have to think about how to feed people this winter,” said Genadii Lebid, Head of Verkhniodniprovska Amalgamated Territorial Community, who noted that because of the disruptions and uncertainty caused by the conflict people are very eager to plant their gardens and have some food for their families.

FAO has been operating in Ukraine since 2003 and following the start of the war, the Organization has developed and updated its Rapid Response Plan (RRP) to provide agricultural assistance and ensure food security to those most affected by the conflict.

FAO’s response includes providing crop and livestock inputs along with cash to support the most affected smallholder farmers and livestock holders to meet seasonal deadlines. This support will enable households to produce vegetables, cereal crops, milk, meat and eggs to feed themselves.

“In the coming weeks, FAO will reach 3 700 households (9 600 people) with multi-purpose cash transfers and over 14 600 rural families (38 000 people) with vegetable production kits to resume food production for consumption and sale,” added Pierre Vauthier. “We are also planning to distribute poultry and support vulnerable livestock keepers by providing animal feed and vitamin-mineral supplements. With more resources, we will be able to reach more people in vulnerable rural areas of Ukraine”.

FAO is calling for $115.4 million in funding to provide support to 979 320 small farmers and medium-sized producers through December 2022 to boost food availability and access. To date, FAO has raised $11  million. The financial contributions have been provided by Australia, Belgium, the CERF Rapid Response, the EU, France, Japan, the Louis Dreyfus Foundation, Ukraine Humanitarian Fund and USAID’s Bureau for Humanitarian Assistance (BHA).

Further contributions are urgently needed to reach more people to maintain the spring cropping season and support the harvest preparation.

More information on data, analyses, policy recommendations, and FAO’s actions on the ground can be found here.

FAO in Emergencies: War in Ukraine

In Focus: FAO’s responds to the Ukraine crisis