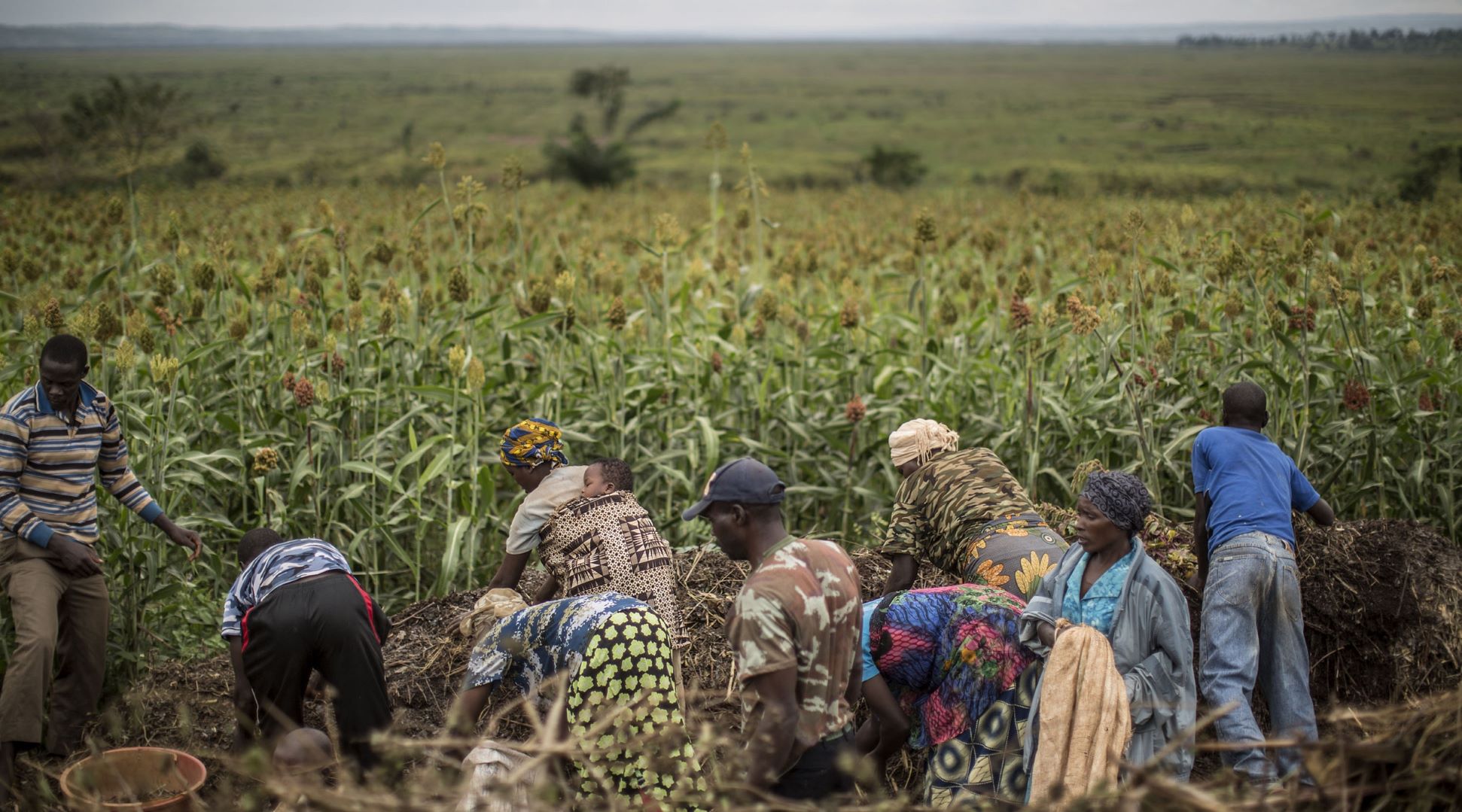 Applying manure to a maize field in Rwanda.

Rome - How much fertilizer is the right amount to ensure that crop production can achieve local and global food security needs while limiting harm to the environment?

Answering that question remains a huge challenge, but one that can be better explored through new, robust data available in FAOSTAT. This new information tool is a joint effort by the Food and Agriculture Organization of the United Nations (FAO) and the International Fertilizer Association (IFA), in collaboration with top scientists and experts at the University of Maryland Center for Environmental Science, the Swedish University of Agricultural Sciences, CEIGRAM-Universidad Politécnica de Madrid, Wageningen University & Research, the University of Nebraska and the African Plant Nutrition Institute.

This fruitful partnership has led to the development of novel data on cropland nutrient budgets, allowing to assess the environmental burden of fertilizer inputs in relation to the amounts needed to support sustainable crop production.

The Cropland Nutrient Budget is a new data domain of FAOSTAT, the world’s largest portal on food and agriculture statistics, serving as a global public good allowing Member States and all stakeholders in the world’s agrifood systems to peruse harmonized data on production, trade and consumption – and now the flows of nitrogen, phosphorus and potassiium, the three major plant macronutrients needed by crops to thrive.

FAO takes the basic crop and livestock production data provided by countries as part of their international reporting obligations, integrates them with methods and models provided by the science partners in this project, to generate a common set of reference data, by country, over the time-series 1961-2020; which will be annually updated. The FAOSTAT data, explained FAO Senior Statistician Francesco Tubiello, represent a solid data tool, built on basic national statistics to help disentangle difficult sustainability issues such as nutrient flows, at country, regional and global level.

Cropland nutrient budgets are an important indicator of nutrient flows that can signal insufficient or excess use of agricultural inputs in the form of the three main nutrients for plant growth, be it in mineral, chemical or organic form.

The budget approach tallies up the amounts of mineral and chemical  fertilizers and manure applied to cropland soils along with biological nitrogen fixation – pulses are big nitrogen fixers- and atmospheric deposition, and subtracts the outflow of the nutrients  associated with crop harvests.

In principle, excess nutrient loads in the soil (a surplus in the budget) present environmental risks such as leaching into water sources and volatilization in the form of greenhouse gas emissions. On the other hand, insufficient nutrient loads (a deficit in the budget) are often associated with lower crop yields and a depletion of soil nutrients.

Budgets can also be transformed to efficiency rates, which is a measure of how well crops use available nutrients (ratio between the nutrient removal from crops and the total nutrient input). However, data shows that outcomes reflect underlying issues that need to be handled with care. Seemingly impressive use efficiency rates, for example, can in fact indicate soil mining of nutrients, an unsustainable situation where insufficient inputs, applied relative to otherwise needed crop production levels, will end up impoverishing future production prospects

At the global level, in 2020, 85 million tonnes of nitrogen (N), 7 million tonnes of phosphorus (P) and 12 million tonnes of potassium (K) were distributed over croplands, up fourfold since 1961, with a rising share of them provided by synthetic fertilizers. N, P and K were distributed at average rates of 54, 4 and 7 kilograms per hectare respectively. Compared to the 1960s, those application rates represent a 3.4-fold increase for N, stability for P and a 36 percent drop for K. The efficiency rates for all three has been rising in recent decades and has averaged between 50 and 62 percent over the whole time period.

China and India have some of the highest N budget surpluses in the world, with efficiency rates below the world average of 50 percent. Much smaller surpluses were found in Brazil and the United States of America, in part due to large-scale soybean cultivation, requiring less inputs in those countries due to the natural biological nitrogen supply from this crop.

Some countries have surpluses in one key nutrient and significant deficits in another, including major agricultural countries such as Argentina, Nigeria and Ukraine. That, explains Nathan Wanner, FAO Statistician who contributed to building the new database, may suggest rebalancing strategies based on crop choice and fertilizer priorities.

FAO is custodian of Sustainable Development Goal Indicator 2.4.1, which monitors the proportion of area under productive and sustainable agriculture.

The new Cropland Nutrient Budget data offers a way to go beyond rudimentary criteria based on application rates of fertilizers as a simplified benchmark. While policy makers may disagree over the trade-offs between use of fertilizer inputs, food production needs and environmental protection, the new data offers a more balanced and complete way to understand the interplay of each component in determining nutrient flows and thus better identify useful strategies.

FAO is engaged on multiple fronts in the challenge of promoting and monitoring through both basic statistics and sophisticated data the state of sustainable agriculture, as exemplified by recent work on PROSA (monitoring Progress towards sustainable agriculture) framework, its hosting of the Global Soils Partnership and the recent initiatives on soil nutrient mapping.