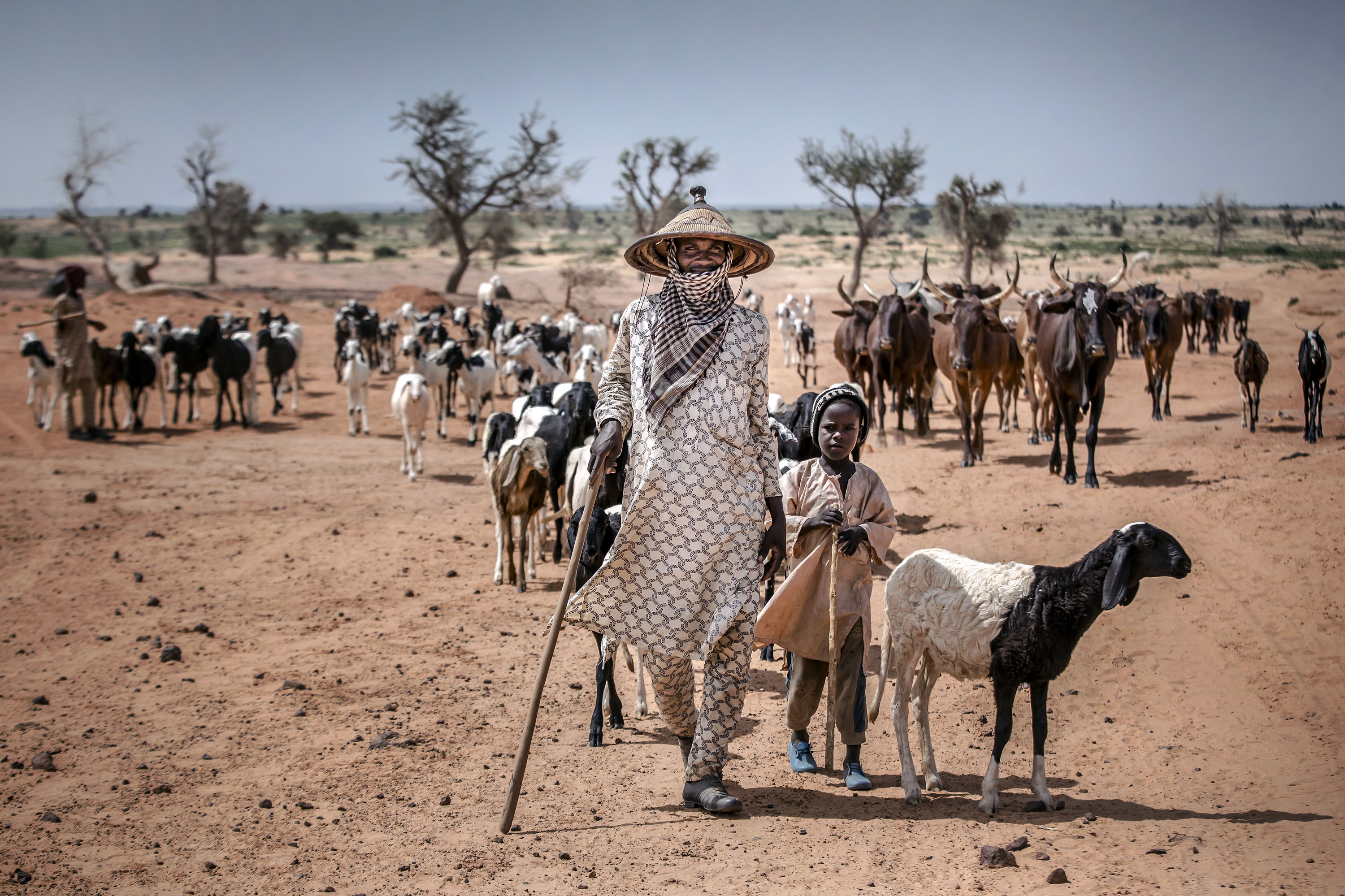 A pastoralist in Niger

Rome/New York – Mobile pastoralism is an important platform for livelihoods in the Sahel region, and improved governance and support can help reduce the risk of conflicts, QU Dongyu, Director-General of the Food and Agriculture Organization of the United Nations (FAO), said today at a panel focused on fostering peace in the area.

“Increasing conflicts and insecurity in agro-pastoral areas have led to a negative view of cross-border transhumance, despite its significant economic benefits and socio-cultural and environmental importance,” Qu said. “Transhumant pastoralism is a vital strategy, employed by millions of people across the Sahel to convert scarce and variable natural resources into a sustained source of nutritious food, income and viable livelihoods.”

The Director-General spoke at a meeting of the UN Peacebuilding Commission focused on how to support the UN Integrated Strategy for the Sahel (UNISS) countries in the region and efforts by the G5 Sahel – Burkina Faso, Chad, Mali, Mauritania, and Niger -  to address climate degradation challenges from a peacebuilding perspective. Participants reviewed a flagship initiative of FAO and the International Organization of Migration (IOM) on transhumance in the region to identify opportunities and challenges its implementation has brought to light.

Briefings were presented by FAO’s Director-General, IOM Director-General António Vitorino, UN Special Coordinator for Development in the Sahel Abdoulaye Mar Dieye, Eric Tiare, Executive Secretary of the G5 Sahel Secretariat, and representatives of the African Union, the European Union, the World Bank, the African Development Bank and local non-governmental organizations as well as other UN officers.

The G5 Sahel countries have experienced mounting security threats and recurrent food crises in recent years, driving massive humanitarian needs. That has been a primary driver of the nearly tripling of the number of people in a situation of food security crisis or worse in West Africa and the Sahel since 2016, to around 35 million people in 2022, according to the Cadre Harmonisé. After irregular rains in 2021, a very severe lean season for pastoralists is expected this year, with Niger’s cereal production on course to be 38 percent below its five-year average representing a particular cause of concern. Available pasture covers just one to three months of needs, triggering early movements of herds and raising the risk that conflicts with farmers become exacerbated.

Conflict and the climate crisis are adversely affecting mobility, the FAO Director-General said, noting that mobility allows livestock owners to take advantage of the variety of local ecosystems, adapt to environmental changes and access a wider range of markets. Increased resilience is critical, and that will require improved public policies to address the multi-dimensional and cross-border challenges in the region.

The number of violent attacks in Central Sahel increased eightfold from 2015 to 2020, triggering a twenty-fold increase in internally displaced people in the G5 Sahel countries and nearly a million refugees fleeing their countries.

More has to be done and more impact achieved, the Qu said. FAO’s initiatives in the region are focused on revitalizing local mechanisms for preventing and managing conflicts related to access to and use of natural resources, with the goal of reaping local peace dividends.

FAO uses conflict analysis to take stock of conflicts over natural resources and other conflicts in rural areas, identify initiatives for conflict prevention and management, and formulate proposals to improve the effectiveness of conflict prevention and management mechanisms. The conflict analysis is one of the main activities implemented in projects such as “Strengthening the resilience of cross-border pastoral and agropastoral populations in priority areas in the Sahel” funded by the Global Network Against Food Crises and the EU.

FAO collaborates with many UN agencies using the Peace Building Fund, to support the Sahelian people and institutions That has involved establishing networks of Dimitra community listeners’ clubs capable of functioning as instruments for promoting inclusive citizen participation, establishing agropastoral field schools as a training place on new technologies but also for dialogue with youth and women who are essential in the peace process as well as other initiatives - including data-driven early warning systems, anticipatory actions for drought risks, the use of feed balance sheets to identify supply and demand matches, vaccination of small ruminants and the construction of pastoral boreholes for watering - to restore a climate of trust between local authorities and grassroots community members.

With funding from the Peacebuilding Fund, FAO and the IOM have partnered on a project in the Liptako-Gourma area, which borders Burkina Faso, Mali and Niger and is under particular strain from a complex set of factors including dwindling resources, climate variability, demographic pressure, high levels of poverty, disaffection, communal tension and the absence of state institutions and basic services, all exacerbated by violence related to organized crime and Non-State Armed Groups.

In the Sahel, around 50 million people or 72 percent of the population depend on rearing livestock for their survival and the livestock sector contributes around a quarter of the total gross domestic product of the three countries.

Using the Transhumance Tracking Tool developed by IOM and FAO to provide an early response mechanism for local stakeholders to alleviate potential conflicts, the project enables identification of the scale of emerging problems, notably the number of pastoralists who are “stranded”, mostly due to security reasons, COVID-19 restrictions, government rules or the relative presence or absence of viable grazing lands. Stranded herders face particular challenges in gaining access to livestock markets to sell their cattle.

That tool and other informant networks indicate that transhumance – especially early or large-scale movements of animals - is related to the majority of potential conflict scenarios and that only a minority of cases are effectively resolved by local leaders. This highlights the need for more effective national political responses including assuring access to basic services such as health, education, technical extension services and financing.

He highlighted the need to work closely with local, national and regional authorities to enhance the effectiveness of regulations and policies for transhumance, facilitate greater investment in pastoral infrastructure, and promote more inclusive land management institutions.