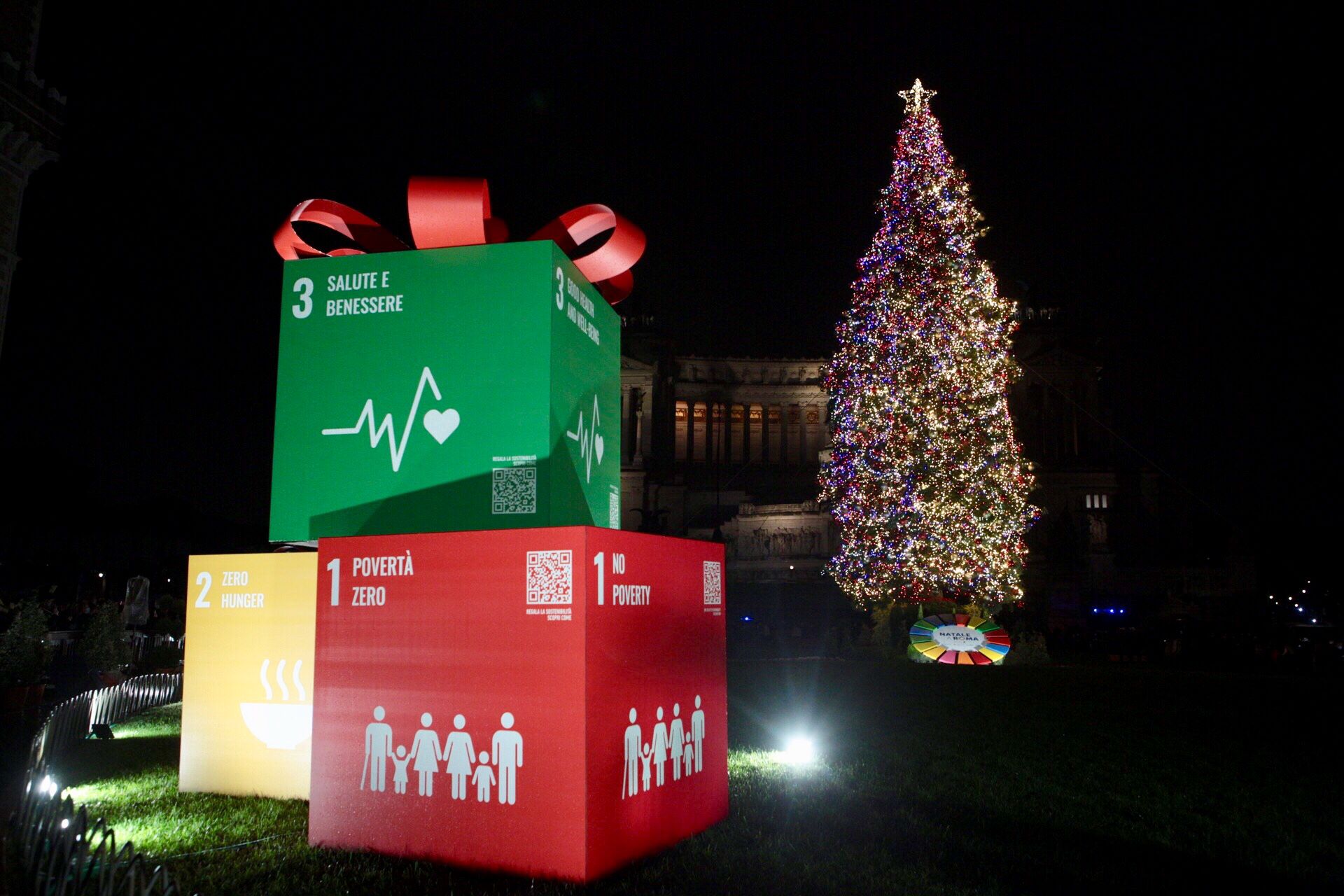 The official ceremony to inaugurate the 25 meter high fir on Piazza Venezia in Rome’s historic city centre took place today as the Italian capital launched the initiative “Christmas in Rome – Let’s give the gift of a sustainable city”.

The campaign calls on citizens to join global efforts to build a more sustainable world, starting from their own city, and is symbolized by the giant gift packages at the foot of the Christmas tree, each representing one of the UN’s 17 Sustainable Development Goals (SDGs) including global priorities such as Zero Hunger, Climate Action and Gender Equality.

Launching the campaign at the ceremony was the Director-General of the Food and Agriculture Organization of the United Nations (FAO), QU Dongyu; Mayor of Rome, Roberto Gualtieri; Michaela Castelli, President of the city’s ACEA energy utility; and Enrico Giovannini, Minister of sustainable infrastructures and mobility of Italy.

“The gifts under this “Tree of Action” are a roadmap for how each of us can take simple actions to be part of the change” FAO Director-General QU Dongyu said. Inviting everyone to “learn more about the sustainable actions that each of us can do in our daily life”, Qu added that “we need to work together to make our society both cities and rural areas more sustainable for better production, better nutrition, a better environment and a better life for all – and leaving no one behind.”

Roberto Gualtieri, Mayor of Rome said:  this Christmas initiative "is dedicated to light and sustainability. It “symbolizes the will of our city to act with respect to the duty we have to save our planet and, as Pope Francis wrote in the Encyclical Laudato si', to "unite the whole human family in the search for sustainable and integral development".

“The goals of sustainable development are the best gift that can be given to the younger generations and to all of us, a gift that opens the way to a different and better future” said Minister Giovannini. “My wish is that the gifts under the Christmas tree in Piazza Venezia in Rome, will make everyone, Romans and tourists alike, reflect on the commitments that we are all called to undertake ".

“With the traditional Christmas lights, ACEA confirms its proximity to the city of Rome and its attention to enhancing of Rome's architectural heritage” affirmed President of Acea Michaela Castelli. Supporting the awareness raising initiative on the SDGs promoted by the Municipality of Rome and FAO is “consistent and perfectly in line with the Group's commitment to promoting a culture of sustainability, attentive to both the environment and social issues."

Each gift package displays a QR code which, when scanned by visitors with their smartphones provides them with information compiled by FAO experts about concrete actions each of us can take to make our lifestyle more sustainable and start building a better future for the planet, our city and its people.
A special package, illustrated by Roman artist Lorenzo Terranera, is dedicated to children and gives them the possibility to carry out simple actions at home or at school to learn and contribute to our shared sustainable future.

Additional content is also accessible to visitors both in Rome and all around the world via a web App and through the FAO website.

Apart from the SDG gift packages around the giant Christmas tree in Piazza Venezia, the lighting along the main shopping street in central Rome connecting Piazza Venezia with Piazza del Popolo are also illustrated with the SDG themes.

The initiative builds on a year-long and intense collaboration between FAO and Italy in the context of the Italian Presidency of the G20 , which has brought food security, the transformation of agrifood systems and sustainable development to the forefront of the global agenda.

These initiatives include the opening of the G20 Green Garden in Rome’s ancient Appia Antica Park, which serves as an open-air museum celebrating “People, Planet, Prosperity” and Rome’s ancient heritage while calling for global solidarity to create a sustainable future for all.