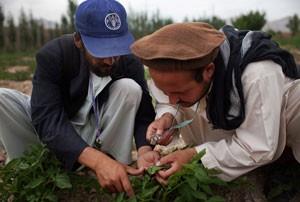 FAO agronomist providing advice to a farmer in Afghanistan

06/10/2010
6 October 2010, Rome - Twenty-two countries are facing enormous challenges like repeated food crises and an extremely high prevalence of hunger due to a combination of natural disasters, conflict, and weak institutions. These countries are in what is termed a protracted crisis, FAO said in its “State of Food Insecurity in the World 2010” hunger report, jointly published today with the World Food Programme (WFP).

Chronic hunger and food insecurity are the most common characteristics of a protracted crisis. On average, the proportion of people who are undernourished in countries facing these complex problems is almost three times as high as in other developing countries.

A large share of the aid flows into these countries is in the form of emergency humanitarian food assistance that not only helps to save lives, but also provides an investment in a country’s future, preserving and strengthening the human assets and livelihoods that are the foundation of future stability and development.

When used with other tools such as cash or vouchers, and support for local purchase of agricultural produce, this maximises the chance that humanitarian food assistance will serve as a strong basis for achieving food security in the longer term.

Earlier this month, FAO revealed that 925 million people in the world live in chronic hunger, down 98 million from 1.020 billion in 2009. The decline was primarily attributable to better economic prospects in 2010 and the fall in food prices since mid-2008.

“Faced with so many obstacles, it is little wonder that protracted crises can become a self-perpetuating vicious cycle,” said the preface to the SOFI report, signed jointly by FAO Director General Jacques Diouf and World Food Programme Executive Director Josette Sheeran.

“They represent ongoing and fundamental threats to both lives and livelihoods, from which recovery may become progressively more difficult over time.”

For the first time, FAO and WFP offer a clear definition of a protracted crisis that will help improve aid interventions. Countries considered as being in a protracted crisis are those reporting a food crisis for eight years or more, receive more than 10 percent of foreign assistance as humanitarian relief, and be on the list of Low-Income Food-Deficit Countries.

FAO and WFP called for a significant rethinking of how assistance is delivered to countries in protracted crises. Official assistance needs to refocus attention on longer-term solutions by aiming to achieve sustained improvements in the productive capacity of vulnerable countries and strengthening their resilience to shocks, whilst continuing to support life saving and livelihoods protection activities.

Nearly two-thirds of countries in protracted crises receive less development assistance per person than the average for least-developed countries.  More importantly, agriculture receives just three to four percent of development and humanitarian assistance funds even though it accounts for around a third of their gross domestic product and is the main source of food and income for nearly two thirds of their population.

“Protracted crises call for specially designed and targeted assistance,” Diouf and Sheeran wrote. “There is an urgent need for assistance in protracted crises to protect livelihoods as well as lives, because this will help put the country on a constructive path to recovery.”

“Lessons from the experience of many countries show that building longer-term assistance activities in the framework of existing or revitalized local institutions offers the best hope of long-term sustainability and real improvement of food security. Social protection mechanisms, such as school meals, cash and food-for-work activities and vouchers can make a vital difference in the long term,” Diouf and Sheeran wrote.

Other highly effective measures include stimulating markets through purchase of food aid supplies on local markets or through cash-based schemes. Findings of the hunger report will be discussed by members of the newly reformed Committee on World Food Security (CFS) in Rome (11-16 October 2010).

CFS is an intergovernmental body which serves as a forum in the United Nations System for review and follow-up of policies concerning world food security including production and physical and economic access to food.