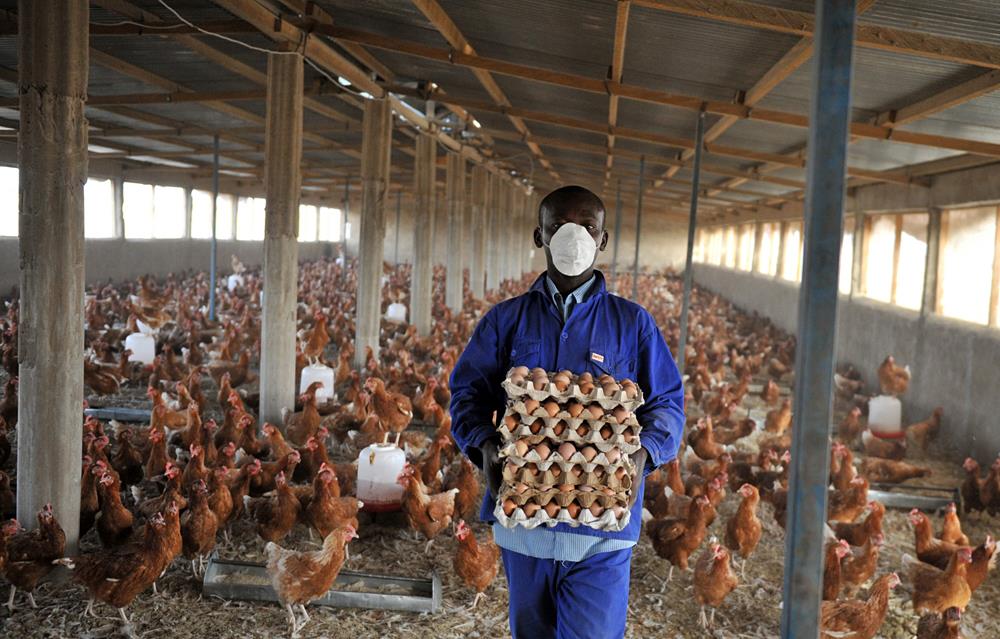 A poultry farm in Chad.

16/12/2013
16 December 2013, Rome - Population growth, agricultural expansion, and the rise of globe-spanning food supply chains have dramatically altered how diseases emerge, jump species boundaries, and spread, according to an FAO report released today. A new, more holistic approach to managing disease threats at the animal-human-environment interface is needed, it argues.

Seventy percent of the new diseases that have emerged in humans over recent decades are of animal origin and, in part, directly related to the human quest for more animal-sourced food, according to the report, World Livestock 2013: Changing Disease Landscapes.

"What this means is that we cannot deal with human health, animal health, and ecosystem health in isolation from each other - we have to look at them together, and address the drivers of disease emergence, persistence and spread, rather than simply fighting back against diseases after they emerge," he added.

Meanwhile, food safety hazards and antibiotic resistance are on the increase worldwide.

Globalization and climate change are redistributing pathogens, vectors, and hosts, and pandemic risks to humans caused by pathogens of animal origin present a major concern.

But in the push to produce more food, humans have carved out vast swaths of agricultural land in previously wild areas - putting themselves and their animals into contact with wildlife-borne diseases.

Indeed, a majority of the infectious diseases that have emerged in humans since the 1940s can be traced back to wildlife, notes FAO's report. For instance, it is likely that the SARS virus emerging in humans was first transmitted by bats to masked palm civets and eventually spilled over to humans via animal markets.  In other cases, the opposite occurs - livestock introduce pathogens into natural areas, affecting wildlife health.

Meanwhile, greater numbers of human beings are on the move than ever before, and the volume of goods and products being traded internationally is at unprecedented levels - giving disease-causing organisms the ability to travel the globe with ease.

And climate fluctuation is having direct impacts on the environmental survival rate of disease agents, especially in warm and humid areas, while climate change influences the habitats of hosts, migration patterns and disease transmission dynamics.

The role of livestock

FAO's new study focuses in particular on how changes in the way humans raise and trade animals have affected how disease emerge and spread.

"In response to human population growth, income increases and urbanization, world food and agriculture has shifted its main focus from the supply of cereals as staples to providing an increasingly protein-rich diet based on livestock and fishery products," World Livestock 2013 notes.

While livestock production provides a number of economic and nutrition benefits, the sector's rapid growth has spawned a number of health-related challenges, it says.

The risk of animal-to-human pathogen shifts varies greatly according to the type of livestock production and the presence of basic infrastructure and services.

While intensive production systems are largely free from high-impact animal and zoonotic diseases, they do present some pitfalls, particularly in developing countries and countries in transition, according to the report.

The report also states, however, that disease emergence in livestock is not specific to large-scale, intensive systems.

Smallholder livestock systems - which tend to involve animals roaming freely over large areas, but still in relatively high densities - often facilitate the disease spread, both among local animal populations and over broad distances.

A new approach to disease

"The many diverse diseases challenges discussed in this publication require greater attention to prevention," argues World Livestock 2013. "A business-as-usual approach to risk management no longer suffices."

To achieve this, FAO advocates the "One Health" approach - looking at the interplay between environmental factors, animal health, and human health and bringing human health professionals, veterinary specialists, sociologists, economists, and ecologists together to work on disease issues within a holistic framework.

At the same time, "livestock health is the weakest link in our global health chain. Disease must be addressed at its source - particularly in animals," it adds.


And there is a need for stronger mechanisms for the international exchange of information on animal diseases in general, as well as on best practices in livestock rearing and managing animal health risks, within a One Health framework.