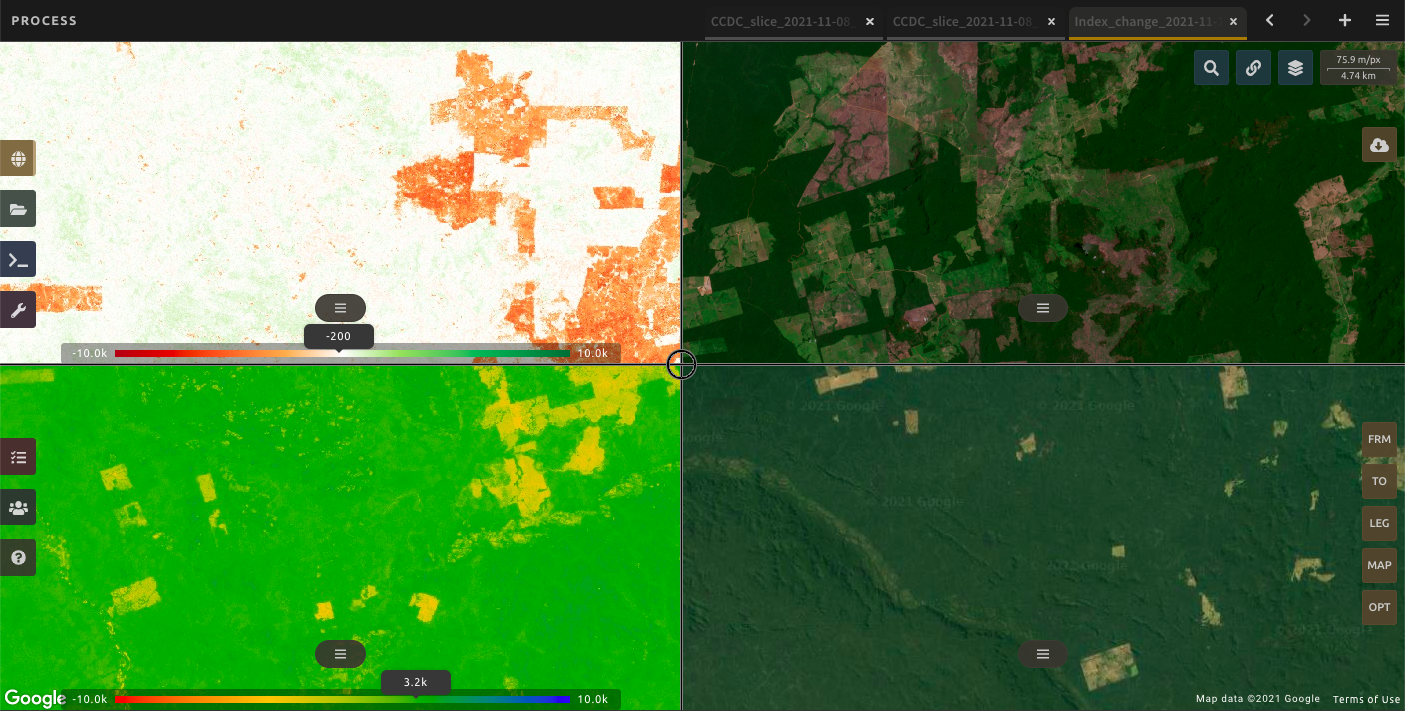 The SEPAL platform’s multi-window interface showing four different themes for a site from the Brazilian Amazon.

Rome - Producing sound data on forests and land-use has become easier with the launch of a new phase of the Food and Agriculture Organization of the United Nations’ (FAO) state-of-the-art forest and land monitoring platform SEPAL.

The second phase of SEPAL - System for Earth Observation Data Access, Processing and Analysis for Land Monitoring – can directly support FAO member countries in their efforts to generate transparent, accurate and consistent geospatial data, which is critical for reducing deforestation and degradation, and accelerating restoration. It will also help to ward off the worst impacts of climate change, protect against biodiversity loss, and safeguard the many benefits of forests to people and nature.

“At COP26, over 140 countries, accounting for more than 90 percent of the world’s forests, committed to work together to halt and reverse forest loss and land degradation by 2030 under the Glasgow Leaders’ Declaration on Forests and Land Use,” said Mette Wilkie, Director, FAO Forestry Division. “Transparent and accurate information on the status and trends of countries' forests and land use, will be fundamental to achieving this ambitious Declaration. Therefore, the launch of a new phase of the FAO’s state-of-the-art forest and land monitoring platform SEPAL could not come at a better moment.”

The $15 million second phase of the SEPAL project is a multi-donor project with an initial contribution from Norway's International Climate and Forest Initiative (NICFI) of $10 million.

"I am glad to announce the grant of 90 million Norwegian kroner to the Food and Agriculture Organization of the United Nations. This project will support tropical forest countries in making the most of the constantly improving access to satellite data. This in turn can help them implement ambitious sustainable land use policies to protect forests," said Norway's Minister of Climate and the Environment, Espen Barth Eide.

The launch took place at a side-event at the Geo for Good Summit on Wednesday - an annual conference organized by Google and geared toward non-profits, scientists, government agencies and other change-makers who want to leverage geospatial technology for positive impact in the world.

Conceived in 2015, SEPAL has evolved into a platform with an active and vibrant user community of over 7,000, many in government agencies of forest countries. SEPAL combines geospatial data infrastructures such as Google Earth Engine with powerful open-source data processing software including R, ORFEO, GDAL, and puts this all in a supercomputing environment immediately accessible to users anywhere in the world, even from their mobile phones. The platform enables easy use and processing of high-resolution satellite imagery for reporting and informed decision-making.

The second phase will further advance the generation of high-integrity forest and land-use data enabling countries to attract public and private carbon finance for action on climate change mitigation through forests.

The new phase will also capitalize on the ever-expanding sources of remotely sensed data, including those from the National Aeronautics and Space Administration (NASA), European Space Agency (ESA), and high-spatial and temporal resolution images made available through the NICFI-Planet data programme.

In particular, this phase will focus on supporting countries in their efforts to halt tropical deforestation and forest degradation. According to the recent FAO data, tropical rainforests continue to record the highest deforestation rates.

In its second phase, FAO will apply innovative capacity development methods to reach all 64 countries included in the NICFI-Planet data programme to enable independent use of the platform for key forest and land monitoring needs.

Furthermore, FAO will develop novel user-friendly applications in SEPAL modules for improving the integrity of forest data for standards such as ART/TREES enabling countries to attract much needed public and private finance for forest and climate actions. In addition, new modules will be developed for the monitoring of forest and ecosystem restoration, peatlands and mangroves, early warning systems and the monitoring of fire and fire risk. The new applications will also allow the integration of geospatial data for forests and agriculture. All of which are important to achieving Sustainable Development Goal 15 (Life on Land).

SEPAL is part of FAO’s Open Foris initiative which provides open source digital public goods developed in collaboration with over 70 countries and partners, and which are widely used for forest and land monitoring applications. Open Foris technical solutions have enabled data generation and provision for over 70 percent of the 54 countries that have submitted a forest reference levels to the United Nations Framework Convention on Climate Change (UNFCC), representing a forest area of 1.4 billion hectares and representing almost 80 percent of global deforestation.