Niger – About the country 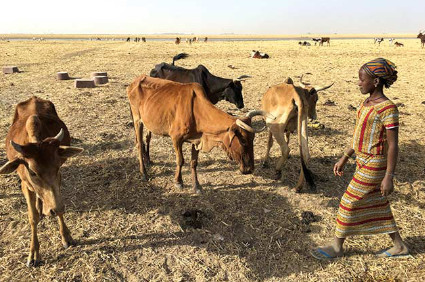 The Sudano-Sahelian climate is characterized by very high average temperatures and by the alternation of a rainy season (June to September) with humid winds from the Gulf of Guinea and a dry season lasting between five and nine months (from October-November to May-June) characterized by dry winds from the Sahara. Average precipitation (280 mm/year) decreases from south to north.

Mali's hydraulic potential remains poorly mobilized. Indeed, less than 5 percent of total renewable resources were exploited in 2006. Current water withdrawals from the irrigation sector are of the order of 5.0 km3 in 2006, or 96.4 percent of the total withdrawal, and come almost entirely from surface water resources.

Mali is a landlocked country that covers an area of approximately 1.24 million km2, of which 51 percent is desert land. The cultivated areas (arable land and land under permanent crops) occupy 4.7 million ha, or 4 percent of the territory. The potential of land suitable for irrigated cultivation is 2,200,000 ha, of which approximately 566,500 ha are considered to be easily developable from perennial surface water resources.